FIESTA SEÑOR. A devotee holds her Santo Niño tightly at the kickoff of the 2023 Fiesta Señor in Cebu City.

CEBU, Philippines – After two years of celebrating Fiesta Señor at home, hundreds of thousands of residents and visitors finally returned to the streets of Cebu City, on Thursday, January 5, to show their devotion for the Holy Child.

This is the 458th celebration of the religious festival. It includes a nine-day novena to be followed by a day of vespers, and will culminate on January 15, coinciding with the cultural-secular Sinulog festivities.

For the first day of the Fiesta Señor, devotees joined the Walk with Jesus which began at around 4 am at the Fuente Osmeña Circle.

At least 2,000 security personnel were deployed for the entire celebration, consisting of members of the Cebu City Disaster Risk Reduction and Management Office (CCDRRMO), the Philippine National Police (PNP), and other agencies. 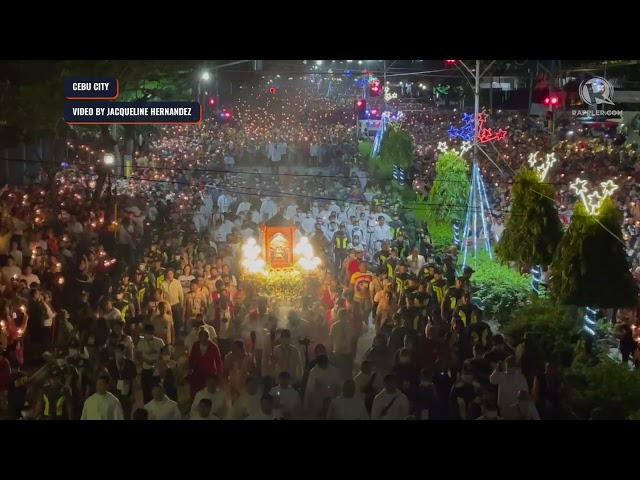 Newcomers and old participants marched together with the image of the child Jesus towards the Basilica Minore del Santo Niño de Cebu (BMSN) where they also attended mass for the opening salvo of the Fiesta Señor.

On their way to the pilgrim center, devotees sang the verses of the iconic cultural song, “Gozos,” also known as “Bato-Balani sa Gugma (Magnet of Love).”

“It’s the journey that gives us happiness, not the destination,” Zerda said in his homily during the mass.

The Catholic festival was put on hold for two years due to the COVID-19 pandemic.

From every corner, families had their own replica of the Santo Niño – a symbol of the Christian faith that was introduced to the Philippines around 500 years ago.