Paeng strengthens into severe tropical storm; Signal No. 3 up 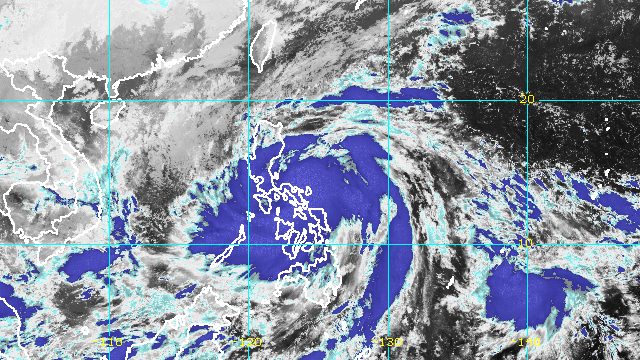 PAENG AND LPA. Satellite image of Severe Tropical Storm Paeng (Nalgae), and a low pressure area outside the Philippine Area of Responsibility, as of October 29, 2022, 2:30 am.

MANILA, Philippines – Paeng (Nalgae) intensified from a tropical storm into a severe tropical storm, prompting the weather bureau to place some areas under Signal No. 3 in the early hours of Saturday, October 29.

Paeng’s maximum sustained winds increased from 85 kilometers per hour to 95 km/h, said the Philippine Atmospheric, Geophysical, and Astronomical Services Administration (PAGASA) in a bulletin released past 2 am on Saturday. Its gustiness went up to 130 km/h from 105 km/h.

The severe tropical storm was already over the coastal waters of Virac, Catanduanes, moving west northwest at a slightly faster 30 km/h from the previous 25 km/h.

The severe tropical storm is seen to make landfall in the Albay-Camarines Sur area within 6 hours, or by early Saturday morning, then cross the Bicol peninsula until noon.

Afterwards, it may cross the Calabarzon-Metro Manila area early Saturday afternoon to evening, emerge over Manila Bay, then pass very close to or over the Bataan-Zambales area between late Saturday evening and early Sunday morning.

PAGASA also said Paeng’s interaction with landmass may cause it to weaken back into a tropical storm within 24 hours or earlier. But it may re-intensify into a severe tropical storm once it reaches the West Philippine Sea.

Here are the areas under tropical cyclone wind signals as of 2 am on Saturday:

PAGASA maintained its rainfall forecast for Paeng and reminded areas affected by the severe tropical storm to stay on alert for widespread floods and landslides.

For coastal waters, this gale warning issued due to Paeng and the northeast monsoon at 5 pm on Friday, October 28, is still in effect:

The LPA was located 1,700 kilometers east of Mindanao late Friday evening and may enter PAR on Monday, October 31.

PAGASA is not ruling out the possibility of the LPA developing into a tropical depression. Updates are expected in the coming days. – Rappler.com