Severe Tropical Storm Paeng out of PAR but still felt; Queenie speeds up 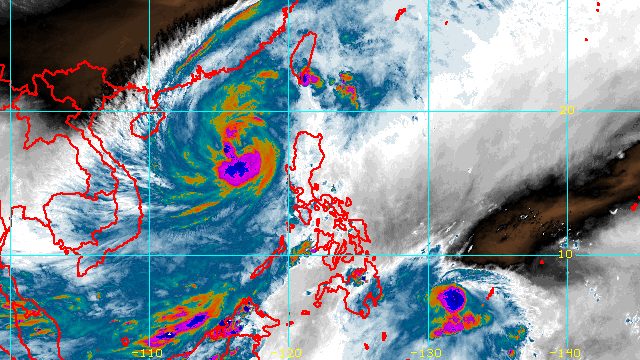 Facebook Twitter Copy URL
Copied
Despite the exit of Severe Tropical Storm Paeng (Nalgae), it is still affecting some areas due to its wide circulation. Meanwhile, Tropical Storm Queenie (Banyan) is moving faster.

MANILA, Philippines – Severe Tropical Storm Paeng (Nalgae) left the Philippine Area of Responsibility (PAR) at 12:10 pm on Monday, October 31, but it continues to affect parts of Luzon and Western Visayas.

In a briefing around 6 pm on Monday, the Philippine Atmospheric, Geophysical, and Astronomical Services Administration (PAGASA) said Paeng was already 400 kilometers west of Sinait, Ilocos Sur, moving north northwest outside PAR at a slightly faster 15 kilometers per hour from the previous 10 km/h.

The severe tropical storm is expected to move north in the next 12 hours before gradually turning northwest to west northwest toward the southern part of China.

Paeng also intensified further on Monday afternoon. Its maximum sustained winds increased from 95 km/h to 110 km/h, while its gustiness is now up to 135 km/h from the previous 115 km/h.

PAGASA said Paeng may strengthen into a typhoon on Monday evening or early Tuesday morning, November 1. After it reaches its peak intensity, it could start weakening by Wednesday, November 2.

Despite Paeng’s exit from PAR, it may still cause rain until early Tuesday morning due to its wide circulation.

Some areas also remain under Signal No. 1, which means they may continue to have strong winds:

Signal No. 3 was the highest tropical cyclone wind signal raised during Paeng’s onslaught.

Still due to Paeng, PAGASA issued a new gale warning at 5 pm on Monday for these seaboards:

The death toll from the severe tropical storm climbed to 98 on Monday, with 40 of the fatalities still subject to confirmation. More than half of the deaths were reported in the Bangsamoro Autonomous Region in Muslim Mindanao.

The tropical storm is moving west southwest at 25 km/h, faster than its previous speed of only 10 km/h.

PAGASA said Queenie will head west in the next 12 hours before turning west northwest on Tuesday morning until Wednesday morning.

By Wednesday afternoon, it is expected to move northwest toward the Caraga-Eastern Visayas area.

As of Monday afternoon, Queenie continued to have maximum sustained winds of 65 km/h and gustiness of up to 80 km/h.

But it may weaken into a tropical depression by Tuesday morning or evening, and further weaken into a remnant low by Thursday, November 3, or possibly earlier.

Despite Queenie’s weakening trend, PAGASA warned that it may still trigger light to moderate rain, with at times heavy rain, in the next few days.

Signal No. 1 could be raised for the eastern part of Caraga and for some areas in Eastern Visayas as early as Tuesday evening, to warn the public that strong winds are expected from Queenie.

Queenie may also cause moderate to rough seas in the eastern seaboard of Mindanao in the next 24 hours. Waves could be 1.2 to 2.8 meters high, which would be risky for small vessels.