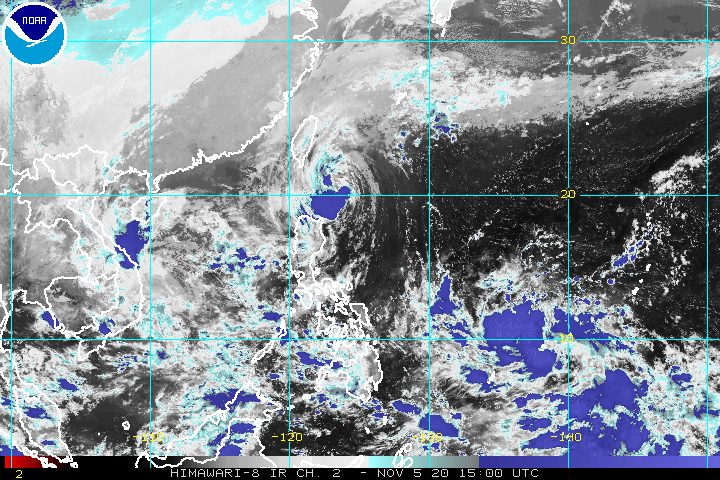 Severe Tropical Storm Siony (Atsani) could make landfall in or pass near the province of Batanes in the next 6 hours, warned the state weather bureau late Thursday evening, November 5.

The Philippine Atmospheric, Geophysical, and Astronomical Services Administration (PAGASA) said in a bulletin released past 11 pm that Siony is already 170 kilometers east of Basco, Batanes.

The severe tropical storm is moving west northwest at 20 kilometers per hour (km/h).

It currently has maximum sustained winds of 100 km/h and gustiness of up to 125 km/h as of Thursday evening.

PAGASA said Siony is likely to reach its peak intensity of around 110 km/h within 36 hours – still a severe tropical storm.

But the state weather bureau is not ruling out the possibility that Siony could strengthen into a typhoon, which is classified as having maximum sustained winds of 118 to 220 km/h. (READ: FAST FACTS: Tropical cyclones, rainfall advisories)

These areas remain under tropical cyclone wind signals as of 11 pm on Thursday:

It added that although it is “more likely for Siony to remain a severe tropical storm during its passage over the Luzon Strait,” the possibility of raising Signal No. 3 remains since Siony might still become a typhoon.

PAGASA added that in the next 24 hours, there is a “minimal to moderate risk” of storm surges 1 to 2 meters high in the coastal areas of Batanes and the Babuyan Islands.

Travel is risky in certain seaboards in the next 24 hours.

There will also be moderate to rough seas, with waves 1.5 to 3 meters high, here:

Siony is expected to leave the Philippine Area of Responsibility (PAR) on Friday afternoon or evening.

By Saturday, November 7, it may move toward the Paracel Islands area in the South China Sea.

Meanwhile, the low pressure area (LPA) outside PAR that PAGASA has been monitoring is now 1,600 kilometers east of the Visayas.

The LPA may also develop into a tropical depression within 48 to 72 hours. If it does, it would be given the local name Tonyo.

Siony is already the Philippines’ 19th tropical cyclone for 2020.

In early October, the state weather bureau warned Filipinos to expect more rain in the coming months due to the onset of La Niña. – Rappler.com