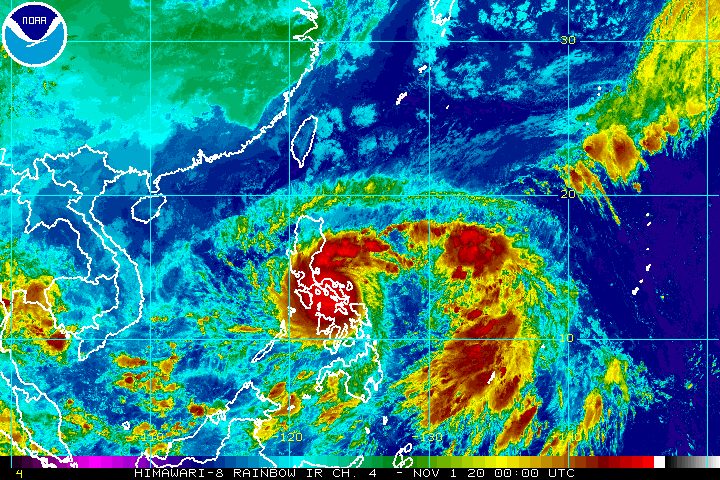 Super Typhoon Rolly (Goni) made its 2nd landfall in Tiwi, Albay, at 7:20 am on Sunday, November 1, bringing violent winds and torrential rain.

Its first landfall was in Bato, Catanduanes, at 4:50 am on Sunday.

The Philippine Atmospheric, Geophysical, and Astronomical Services Administration (PAGASA) said in a bulletin released past 8 am that Rolly is moving west at the same speed of 25 km/h, after hitting the municipality of Tiwi.

The super typhoon maintained its maximum sustained winds of 225 km/h, but its gustiness increased from 280 km/h to 310 km/h. It is the world’s strongest tropical cyclone for 2020, so far. (READ: FAST FACTS: Tropical cyclones, rainfall advisories)

PAGASA said “catastrophic violent winds and intense to torrential rainfall” from Rolly’s eyewall and inner rainbands are “prevailing or expected within the next 12 hours” in these areas:

“This is a particularly dangerous situation for these areas,” the state weather bureau warned.

Below is the latest list of areas under tropical cyclone wind signals as of 8 am on Sunday. Metro Manila is among the areas upgraded to Signal No. 4.

PAGASA added that strong breeze to near gale conditions due to the northeasterlies will be experienced over the rest of Northern Luzon that are not under Signal No. 1.

The state weather bureau maintained its rainfall outlook for Rolly, again reminding the public to watch out for floods and landslides.

In addition, there is a high risk of storm surges in the next 24 hours. These storm surges, “which may be accompanied by swells and breaking waves reaching the coast, can cause life-threatening and damaging coastal inundation.”

“Moreover, there is also a moderate to high risk of seiche or storm surge over the coastal areas surrounding Laguna de Bay and Taal Lake,” added PAGASA.

Travel is also risky for all types of vessels in:

In the remaining seaboards of the country, there are moderate to rough seas, with waves 1.2 to 2.5 meters high. PAGASA advised those using small vessels to take precautionary measures, while “inexperienced mariners should avoid navigating in these conditions.”

After hitting Albay, the center of the super typhoon will cross Camarines Sur and Camarines Norte on Sunday morning, according to PAGASA.

Then it will head toward the Marinduque-southern Quezon area on Sunday afternoon.

Rolly is forecast to exit mainland Luzon landmass and emerge over the West Philippine Sea between Sunday night and early Monday morning, November 2.

By the time it emerges over sea,  it would have weakened back into a typhoon.

Rolly could leave the Philippine Area of Responsibility (PAR) in the early hours of Tuesday, November 3.

It is still moving west northwest at a relatively fast 30 km/h and is already expected to enter PAR on Sunday morning, joining Rolly.

Once Atsani enters, it will be given the local name Siony. (READ: LIST: PAGASA’s names for tropical cyclones in 2020)

Atsani continues to have maximum sustained winds of 65 km/h and gustiness of up to 80 km/h. It is likely to intensify into a severe tropical storm in the next 24 to 36 hours.

But PAGASA maintained that Atsani or the potential Siony “remains less likely to affect any portion of the country over the next 2 to 3 days.”