Signal No. 1 in more areas as Maring continues merging with Nando’s remnants 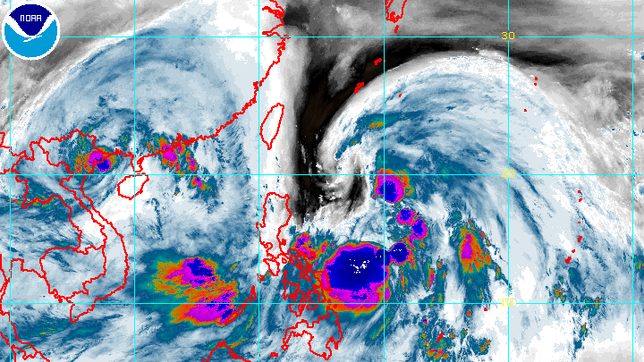 Facebook Twitter Copy URL
Copied
Nine areas in Luzon, the Visayas, and Mindanao are under Signal No. 1 due to Tropical Storm Maring (Kompasu), as of 5 am on Sunday, October 10

Tropical Storm Maring (Kompasu) continued to absorb the remnants of Tropical Depression Nando early Sunday, October 10, with their merger expected to be completed in 6 to 12 hours.

Nando had weakened into a low pressure area or remnant low on Saturday evening, October 9.

Maring was last spotted 665 kilometers east of Virac, Catanduanes, slowing down from 30 kilometers per hour to only 10 km/h as it moved north.

The tropical storm still has maximum sustained winds of 85 km/h and gustiness of up to 105 km/h.

After the merger, Maring is expected to strengthen into a severe tropical storm within 24 to 36 hours, or by Monday, October 11, at the latest. (READ: FAST FACTS: Tropical cyclones, rainfall advisories)

In its 5 am bulletin on Sunday, Philippine Atmospheric, Geophysical, and Astronomical Services Administration (PAGASA) placed more areas under Signal No. 1, which means strong winds are expected:

Occasional gusts are also possible in coastal and mountainous areas of the regions below, even if they are not under a tropical cyclone wind signal. This is due to Maring’s “expansive wind field” and “the gradual enhancement of the southwesterlies and northeasterlies,” said PAGASA.

The weather bureau warned that the enhanced southwesterlies will also bring moderate to heavy rain to these areas on Sunday:

Maring, meanwhile, may trigger rain in varying degrees. Affected areas must be on alert for isolated to scattered floods and landslides.

A gale warning was issued at 5 am on Sunday for the eastern seaboards of the Philippines due to Maring and the northeasterly wind flow. Waters are rough to very rough, with waves 2.8 to 4.5 meters high.

In the remaining seaboards of Luzon and the Visayas and in the northern seaboard of Mindanao, waters remain moderate to rough. Travel is risky for small vessels.

On Sunday morning and afternoon, Maring is projected to accelerate and move north northwest over the Philippine Sea, “notwithstanding the possibility of short-term erratic motion” as it fully merges with what’s left of Nando, according to PAGASA.

Then Maring would turn west northwest toward extreme Northern Luzon, move over the Luzon Strait, and pass close to or over the Babuyan Islands between Monday evening and Tuesday morning, October 12.

Landfall in mainland Luzon, however, is not being ruled out.

Finally, Maring could move over the West Philippine Sea beginning Tuesday and leave the Philippine Area of Responsibility (PAR) on Tuesday afternoon.

Maring is the Philippines’ 13th tropical cyclone for 2021 and the second for October, while Nando was the country’s 14th for the year and the third for the month.