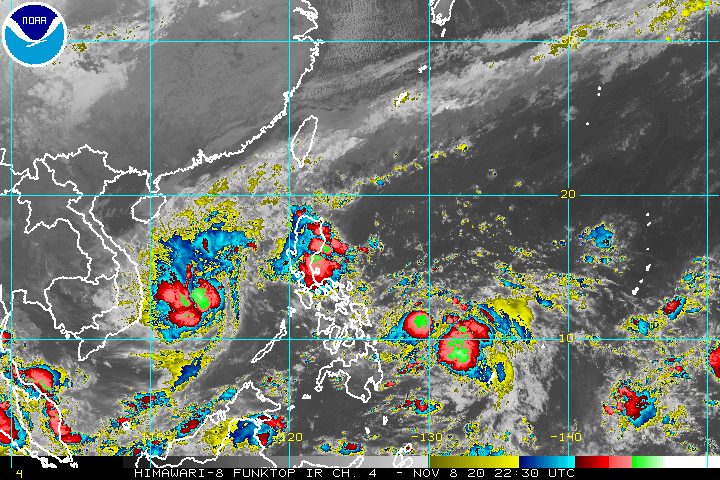 Tonyo intensified from a tropical depression into a tropical storm at 2 am on Monday, November 9, then left the Philippine Area of Responsibility (PAR) at 4 am.

The Philippine Atmospheric, Geophysical, and Astronomical Services Administration (PAGASA) said in its 5 am bulletin on Monday that Etau, a name contributed by the United States, is a Palauan word that means “storm cloud.”

As Tonyo left PAR at 4 am, it was located 710 kilometers west of Calapan City, Oriental Mindoro, over the West Philippine Sea.

PAGASA said the tropical storm is moving west at 30 kilometers per hour (km/h), heading for the southern part of Vietnam, where it is likely to make landfall on Tuesday morning or afternoon, November 10.

It earlier hit Masbate, Marinduque, Batangas, Oriental Mindoro, and Occidental Mindoro. No casualties have been reported.

Though Tonyo is already outside PAR, PAGASA said the tropical storm continues to affect the Kalayaan Islands in the West Philippine Sea. It is causing moderate to heavy rain there, as well as “occasional gusty conditions,” said the state weather bureau.

Tonyo and the remaining tropical cyclone inside PAR, Tropical Depression Ulysses, are also enhancing the easterlies or winds coming from the east. The enhanced easterlies will bring rain to parts of Luzon and of the Visayas on Monday, with floods and landslides possible.

Tonyo is also enhancing the northeast monsoon or hanging amihan, which will continue to bring strong to gale-force winds to these areas:

Travel remains risky, especially for small vessels, in seaboards where rough to very rough seas will be experienced in the next 24 hours.

Due to enhanced northeast monsoon (waves 2.5 to 5 meters high)

There will also be moderate to rough waters in certain seaboards.

PAGASA earlier said the tropical depression is heading for Bicol, where it is likely to make landfall on Wednesday, November 11.

Ulysses maintained its strength early Monday, with maximum sustained winds of 45 km/h and gustiness of up to 55 km/h. But the state weather bureau previously warned it could become a typhoon before it reaches land.

There are no tropical cyclone wind signals raised due to Ulysses yet since it remains far from the country.

PAGASA’s next bulletin on the tropical depression will be issued 11 am on Monday.

Tonyo was the Philippines’ 20th tropical cyclone for 2020, while Ulysses is the 21st – already above the yearly average of 20. (READ: LIST: PAGASA’s names for tropical cyclones in 2020)