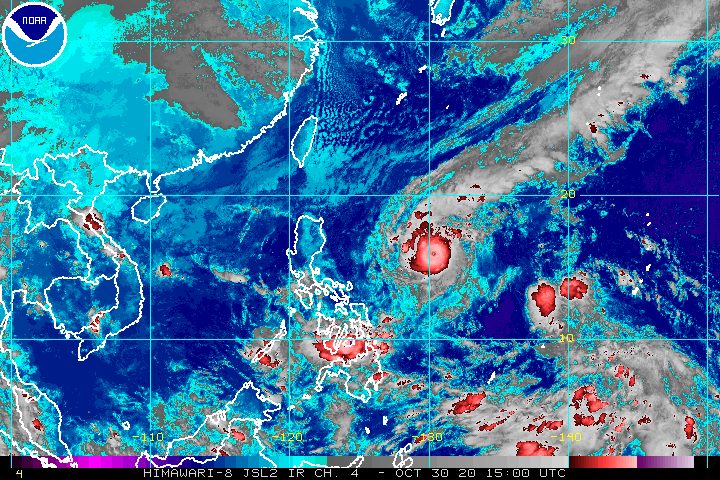 Typhoon Rolly (Goni) could become a super typhoon in the next 12 hours, warned the state weather bureau in its 11 pm bulletin on Friday, October 30.

“Owing to very favorable conditions, there is an increasing likelihood that this typhoon will reach super typhoon category over the next 12 hours,” PAGASA said, referring to the fact that Rolly remains over the Philippine Sea, and tropical cyclones strengthen over water.

Earlier on Friday afternoon, Rolly had maximum sustained winds of 185 km/h and gustiness of up to 230 km/h.

At the moment, Rolly is now 895 kilometers east of Casiguran, Aurora, moving west southwest at a slightly slower 15 kilometers per hour (km/h) from the previous 20 km/h.

Then on Sunday, November 1, “it will gradually turn towards the west northwest, bringing its inner rainbands-eyewall region near or over” Catanduanes, Camarines Norte, and Camarines Sur in the morning and afternoon, and over the Quezon-Aurora area in the evening.

“The center of the eye of the typhoon is forecast to pass very close or over the Calaguas Islands” in Camarines Norte on Sunday afternoon, then make landfall in either Quezon or Aurora on Sunday evening.

Following its landfall, Rolly will cross Central Luzon then possibly exit the landmass of mainland Luzon on Monday morning, November 2.

“After landfall, Rolly is forecast to weaken considerably, but will remain at typhoon category until it emerges over the West Philippine Sea,” said PAGASA.

As of 11 pm on Friday, more areas have been placed under Signal No. 1. These places will experience “strong breeze to near gale conditions”:

Strong breeze to near gale conditions due to the northeasterlies will also be experienced over:

The highest possible tropical cyclone wind signal due to Rolly would be Signal No. 4. “Destructive to very destructive typhoon-force winds” are to be expected if Signal No. 4 is raised.

When it comes to rainfall, PAGASA said Rolly’s trough or extension is bringing light to heavy rain from Friday evening to Saturday morning in these areas:

Then between late Saturday evening and Sunday evening, heavy to intense rain from Rolly will hit the following:

The rain could trigger floods, landslides, and “sediment-laden streamflows” such as lahar, warned PAGASA.

There is also a “moderate to high risk” of storm surges up to 2 meters high this weekend in the coastal areas of the following:

Isolated storm surge heights of up to 2.5 meters high, added PAGASA, could be experienced in the coastal areas of San Miguel Bay in Bicol.

The state weather bureau warned as well that travel is risky for all types of vessels in:

In the remaining seaboards of the country, there are moderate to rough seas, with waves 1.2 to 2.5 meters high. PAGASA advised those using small vessels to take precautionary measures, while “inexperienced mariners should avoid navigating in these conditions.”

Rolly could leave the Philippine Area of Responsibility (PAR) on Monday evening.

Meanwhile, Atsani, the tropical cyclone outside PAR, weakened from a tropical storm into a tropical depression at 10 pm on Friday.

It now has maximum sustained winds of 55 km/h and gustiness of up to 70 km/h. But PAGASA said Atsani is likely to reintensify into a tropical storm in the next 24 to 48 hours.

As of Friday evening, Atsani was 1,790 kilometers east of the Visayas, moving northwest at 25 km/h. If it maintains its speed and direction, it may enter PAR on Sunday.

Once Atsani enters, it will be given the local name Siony. (READ: LIST: PAGASA’s names for tropical cyclones in 2020)

Fortunately, due to its distance from Philippine landmass, it is “less likely” to cause severe weather in the next 3 days.