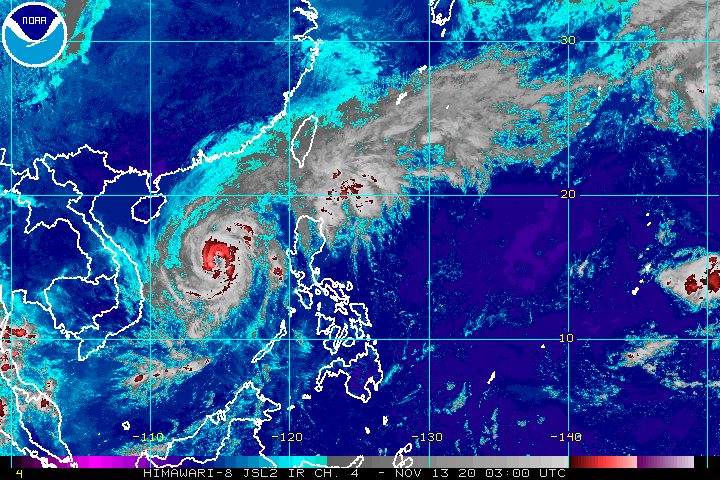 After briefly weakening into a severe tropical storm, Ulysses (Vamco) reintensified back to typhoon category at 8 am on Friday, November 13.

This was followed by its exit from the Philippine Area of Responsibility (PAR) at 9:30 am, leaving deaths and massive flooding in its wake.

The Philippine Atmospheric, Geophysical, and Astronomical Services Administration (PAGASA) said in its 11 am bulletin that Ulysses is now 500 kilometers west of Iba, Zambales, moving west northwest at a slower 10 kilometers per hour (km/h) from the previous 20 km/h.

The typhoon is heading for the central part of Vietnam, according to PAGASA.

PAGASA said Ulysses is likely to maintain its strength in the next 12 hours, but it could gradually weaken again due to conditions caused by the surge of the northeast monsoon or hanging amihan – cold, dry air. Tropical cyclones are fueled by warm, moist air.

While Ulysses is already outside PAR, the typhoon and the surge of the northeast monsoon will continue bringing gusty conditions to these areas:

Ulysses and the surge of the northeast monsoon also continue to affect coastal waters.

Meanwhile, PAGASA said small vessels should take precautionary measures in the eastern seaboards of Luzon, due to moderate to rough seas. Waves are 2 to 3.5 meters high.

The tail-end of a cold front is also affecting Northern Luzon, bringing rain that may cause more floods and landslides. PAGASA advised residents to remain on alert on Friday.

The National Disaster Risk Reduction and Management Council’s official death toll from Ulysses as of Friday morning was 14.

But the Armed Forces of the Philippines said government teams recovered at least 39 bodies in typhoon-hit regions.

Marikina City, which saw its worst flooding since Tropical Storm Ondoy (Ketsana) in September 2009, has been placed under a state of calamity. (READ: [ANALYSIS] Filipinos aren’t so much resilient as Duterte is incompetent, abusive)

Ulysses first passed very close to Bicol on Wednesday, then made landfall thrice in Quezon province:

Ulysses was the Philippines’ 21st tropical cyclone for 2020, already above the yearly average of 20.

It was also the 3rd for November, meeting the upper end of the forecast for the month. Note though that with over two weeks still left in November, the possibility of another tropical cyclone during the month is not ruled out.

For the next 5 months, these are PAGASA’s estimates for tropical cyclones inside PAR: