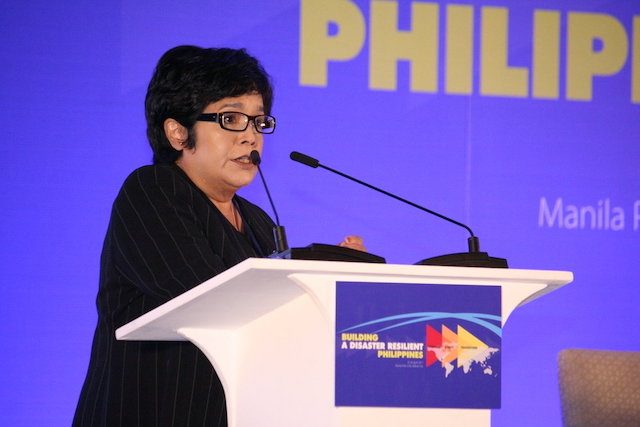 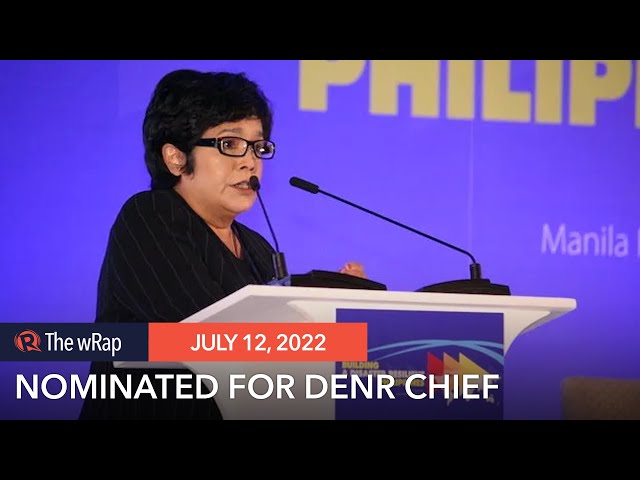 While many online commenters at first mistook her for Toni Gonzaga, the actress and host who campaigned heavily for Marcos’ presidential bid, Loyzaga is well known in environmental and academic circles.

She has three things going for her, say environmental experts and climate activists who had worked with her.

First, her expertise on climate disaster resilience gives the DENR an opportunity to implement and craft policies through the lens of climate change and disaster-preparedness, said Father Jett Villarin, a climate scientist and executive director at the Manila Observatory where Loyzaga worked for many years.

“I do think she will employ such a disaster risk and resilience lens in her work, which is good… Expect more science to enter into policy and decision-making,” he told Rappler.

Climate change affects all sorts of government policies – from mining, to protecting national parks, to air pollution from cars and industries.

A DENR chief with this perspective would have the motivation to harmonize government policies in a way consistent with reducing carbon emissions and helping communities, sectors, and industries survive and thrive amid the consequences of a warmer planet.

Loyzaga’s experience in Manila Observatory – for nine years as its executive director and more recently as a member of its International Advisory Board – means she has worked for decades with scientists and can count on a large network of experts in this field.

“Ms. Loyzaga is the perfect and best choice for the position because of her experience and background,” said Tony La Viña, a lawyer and climate expert who succeeded Loyzaga as Manila Observatory executive director.

“She combines a strong grounding in the natural and social sciences with an understanding of the business sector, poor communities in urban and rural areas, and sustainable development challenges,” he told Rappler.

The Manila Observatory is a scientific research institution founded by the Jesuits, which has been studying Philippine weather patterns and earthquakes since Spanish colonial times. Its scientists have contributed to international research on the environment, and in particular, on climate change.

Loyzaga herself has co-authored studies on household resilience to flooding in Metro Manila, the dynamics between drought and urbanization, and housing and informal settlements.

Alyansa Tigil Mina, a nongovernmental organization campaigning against abuses of the mining industry, expect Loyzaga to “rely more on science-based analysis” when deciding on environmental policies.

Her nomination and that of Raphael “Popo” Lotilla as energy secretary indicate that climate change is a Marcos priority, said La Viña.

Loyzaga’s expertise on environmental issues could be seen as a welcome change to President Rodrigo Duterte’s environment secretary, retired military chief Roy Cimatu. During the Duterte administration, enforcement was very much the theme of the department.

As DENR chief, Cimatu led in rehabilitating Boracay Island during its controversial six-month closure, and in cleaning up Manila Bay, which involved cracking down on pollutive establishments. Cimatu also led Duterte’s typhoon task force which was supposed to craft a plan to prevent a repeat of flooding in Cagayan province and Marikina City experienced during Typhoon Ulysses (Vamco). The task force submitted its plan to Duterte in 2020.

While the Duterte-time DENR under the late environmentalist Gina Lopez cracked down on abusive mining operations and put a stop to new open-pit mining projects, the DENR, under Cimatu, lifted the open-pit mining ban.

In fact, it’s been a while since the DENR was helmed by someone primarily from the academe. Before Cimatu and Lopez, there was Ramon Paje, a career DENR official who started out as a forester. The last academic who led the DENR was marine biologist Angel Alcala who served as science secretary under the Ramos administration. He was named National Scientist in 2014.

Past DENR secretaries were mostly politicians like Lito Atienza, Heherson Alvarez, Michael Defensor, and Ernesto Maceda. There were also economists like Carlos Dominguez III and environmental advocates like Jun Factoran and Elisea Gozun. Aside from Cimatu, the late Angelo Reyes was another retired general who became DENR secretary.

Dealing with an organization, working with others

Second, Loyzaga has plenty of experience handling organizations and administrative work, as her nine years as Manila Observatory executive director show. She was also president of the National Resilience Council, a group that brings together government, communities, the academe, and the private sector in implementing key international agreements on disaster resilience and climate change.

Good administrative experience is a huge plus when leading an agency as large as DENR which encompasses an umbrella of bureaus, task forces, and councils.

Third, the environment secretary-designate knows how to get different groups to work together, a useful skill for any DENR chief.

The DENR has often struggled with its role as both conservationist of natural resources, and regulator. It deals frequently with highly vocal and passionate green groups and business groups from the mining, transport, or manufacturing sectors.

“She also has shown herself capable of bringing together the private and public and civil society sectors to the table when it comes to resilience,” said Villarin.

La Viña can’t second-guess Loyzaga’s policies on mining and the plastics industry but is certain her decisions will be “science-based” and “balanced.”

“She would be sensitive to the business sector but also would prioritize the poor. She is a big supporter of poverty mapping to understand how we sacrifice the poor in development decisions,” he said.

Alyansa Tigil Mina’s Jaybee Garganera wonders how Loyzaga will handle the policies to be pushed by Marcos’ economic team that may entail compromises in environmental protection.

“It will be interesting to see how her science-based background will respond to the clamor of the economic team for more mining projects that environmental science says will increase our risks and vulnerabilities to climate impacts,” he said.

There are also worries that Loyzaga would be more vulnerable to the lobbying power of corporate groups fighting regulatory and transparency initiatives.

“This is her first political appointment and she might face serious challenges in facing the vested corporate interests that want to influence DENR policies, especially on mining and EIA of projects,” said Garganera.

Virtually all industries require EIAs or environmental impact assessments of their projects or establishments, assessments which are made by the DENR. The issuance of environmental compliance certificates is one regulatory practice that could easily be corrupted by firms or unscrupulous DENR officials and employees.

With her background in climate change, would the DENR be working more closely with the Climate Change Commission in formulating a new Philippine pledge (in technical terms: nationally determined contribution or NDCs) for reducing carbon emissions and improving Filipinos’ capacity to weather climate change impacts?

“Top of my mind will be how much will her appointment influence then the level of participation of the department in the Philippine NDC given the last submission in April of last year?” he told Rappler.

The Philippines is expected to contribute to the global stocktake of carbon emission pledges in 2023.

Cielo Magno of Bantay Kita, an advocate for mining transparency, is “hopeful” that Loyzaga’s background means she will champion a review of regulatory policies, especially in the mining sector.

“I am hoping that she can lead the agency in reviewing the requirements of extractive activities and to incorporate in the environmental impact assessment the effects of extractives to the vulnerabilities of communities,” she told Rappler.

“I also hope that she will support the real-time and full disclosure of licenses, contracts, social and environmental monitoring reports and impact assessments, and the active participation of civil society in the monitoring of extractive industries,” she added.

Only a few days before the end of the Duterte presidency, the finance department withdrew the Philippines from the Extractive Industries Transparency Initiative, which for years had pushed the government to make public key data about the mining industry.

Alyansa Tigil Mina and other groups will be closely watching her choices of undersecretaries, believing this will show what direction she wants DENR to take.

Garganera said, “We hope that she will strongly retain her bias for science and preference for social justice in leading the DENR.” – Rappler.com