DISTANCE LEARNING. Teachers make use of green screen as they prepare for the livestreaming of online classes in Valenzuela City School of Mathematics and Science.

Facebook Twitter Copy URL
Copied
'What I see is that the new normal would be a combination of the school-based and home-based. Hindi na talaga 'yung purely classroom ang ating new normal in education,' says Education Assistant Secretary Malcolm Garma

While the Philippines will be reopening up to 120 schools for limited face-to-face classes in a pilot run approved by President Rodrigo Duterte, millions of Filipino students would likely not experience the same learning setup even after the pandemic.

In a Rappler Talk interview on Thursday, October 21, Education Assistant Secretary Malcolm Garma said that the “new normal” in education would not be a “purely classroom setup.”

For two pandemic school openings, students had to stay at home as they continue their education via the distance learning system, which has been widely criticized due to its poor implementation.

There has been an ongoing debate about opening schools during a pandemic. While most students and parents have been urging the government for a gradual reopening of schools, a number of them are also anxious about this move, considering the health risks involved.

Until the pilot run starts on November 15, the Philippines will remain one of the last two countries that have yet to reopen schools for in-person classes since the World Health Organization declared a pandemic in March 2020, with the other country being Venezuela.

Garma said that the pilot run of face-to-face classes would determine the best practices to be adopted in the new normal of classroom learning in the country.

“Within that pilot study period, this is where we will learn not only in terms of the safety in so far COVID-19 is concerned, but also the learning. So we would see the value added [of classroom learning],” he said.

Garma said that though the classroom setup is known as the best way for students to learn prior to the pandemic, things could have changed after months of learning through a remote system.

“Let’s see after so many months that our children are learning from their homes. Tingnan natin ano ba ang nagbago sa kanilang motivation. Ano ba ang value added if babalik sila sa classroom (Let’s see what has changed in terms of their motivation for learning. What is now the value added if they will go back to school)?” he asked.

The pilot run of limited face-to-face classes will run for over two months, from November 15 to January 31.

Weeks before the start of the pilot run, 29 public schools withdrew from the plan, as their host communities were not in favor of students going back to physical classrooms. These schools were part of the initial 59 list of schools in areas deemed low-risk for COVID-19 identified by the Department of Education and Department of Health.

The DepEd was eyeing to complete the 120 schools for the pilot run prior to the November 15 schedule.

Check the stories below for the list of schools approved for limited face-to-face classes and how it will be done. 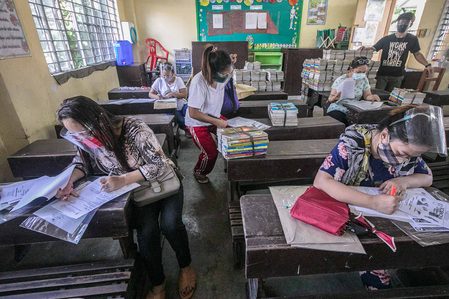