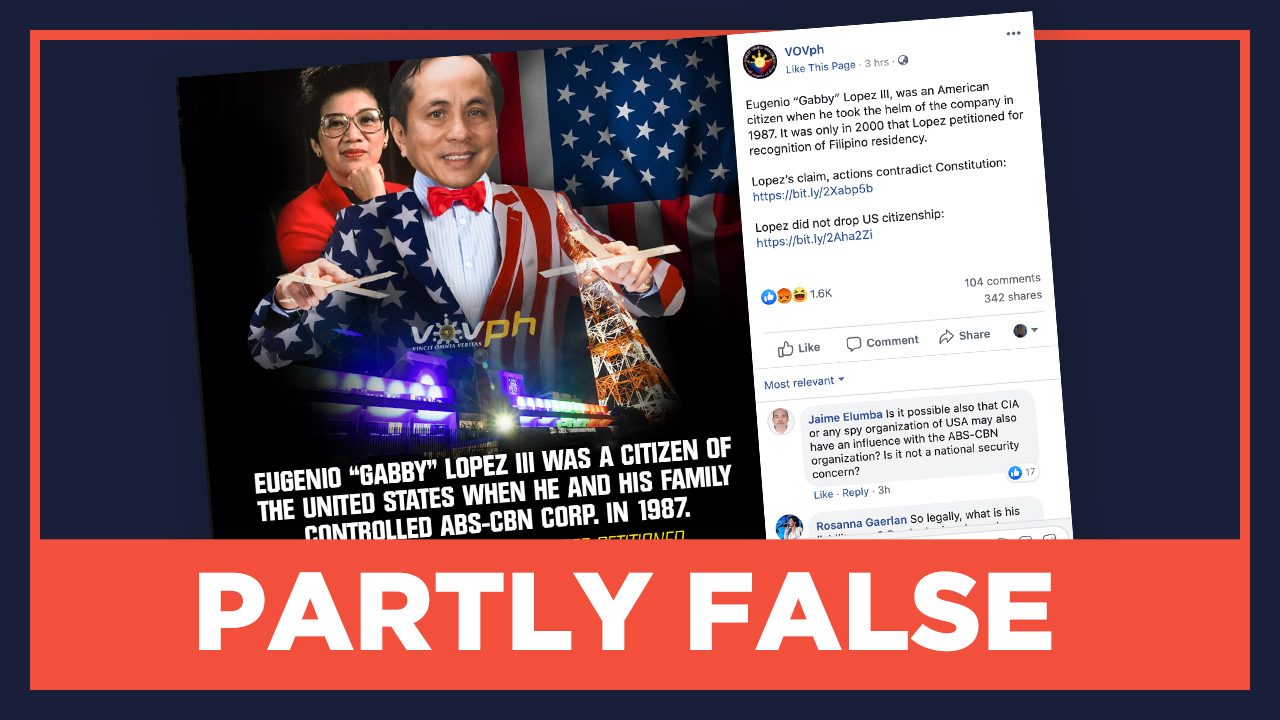 This claim was made by House Deputy Speaker Rodante Marcoleta during the joint House hearing of the committees on legislative franchises and good government and public accountability on Tuesday, May 26.

He cited an opinion piece published in the Manila Times on February 24 titled “ABS-CBN’s head honcho Gabby Lopez is a US citizen,” by Rigoberto Tiglao.

Marcoleta said: “ABS-CBN’s former president, Mr Eugenio ‘Gabby’ Lopez III was an American citizen when he took the helm of the company in 1986 as director then president and then chairman in the later years. It was only in 2000 that he petitioned for recognition of Filipino citizenship and was issued a certificate of recognition as a Filipino citizen in 2002.”

The same claim was echoed in a Facebook post by the page VOVph on Thursday, May 28. Both the text and the graphic in the post say the following: Eugenio “Gabby” Lopez III, was an American citizen when he took the helm of the company in 1987. It was only in 2000 that Lopez petitioned for recognition of Filipino residency.”

The facts: Lopez is both a Filipino citizen and an American citizen. The Philippines even allows dual citizenships.

According to Article IV, Section 1 of the 1935 Constitution, which was already in effect when he was born in 1952, the following are considered Filipino citizens:

Lopez is also an American citizen because he was born by his Filipino mother in the US.

Article XIV of the US Constitution states, “All persons born or naturalized in the United States, and subject to the jurisdiction thereof, are citizens of the United States and of the State wherein they reside.”

“He’s a Filipino under Philippine law, clearly, but because he was born in the US, under US laws, he’s also an American citizen,” said lawyer and former Supreme Court spokesperson Ted Te on the issue.

The question, then, said Te, would be whether Lopez has done anything that might be interpreted as a loss of citizenship under Philippine law, such as taking an oath that renounces every other citizenship.

According to a statement on his citizenship by ABS-CBN on May 11, “[Lopez] did not need to acquire Filipino citizenship because he never lost it nor renounced it.”

They further stated: “When Mr. Lopez asked the Bureau of Immigration to recognize his citizenship, it was for the purpose of getting official recognition of his Filipino citizenship.

The company also said, “The Department of Justice and the Bureau of Immigration have both recognized the Philippine citizenship from birth of Mr. Lopez as contained in Identification Certificate No. 0069 dated 1 Oct 2002.” – Vernise L Tantuco/Rappler.com