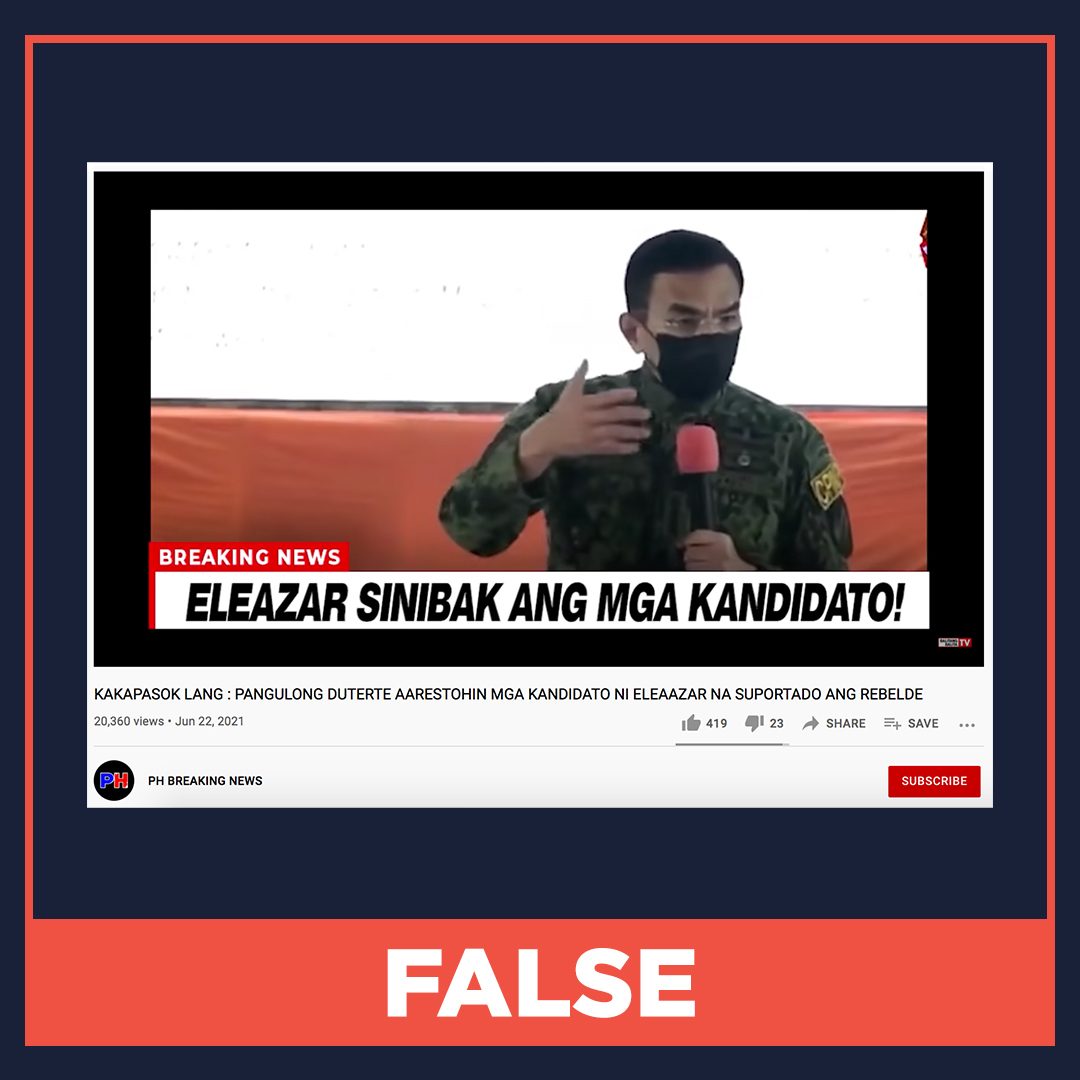 Facebook Twitter Copy URL
Copied
PNP chief Police General Guillermo Eleazar only warned politicians not to give in to the NPA’s extortion demands, and that violators may face charges under the Anti-Terrorism Act of 2020

Photos of four politicians – namely former senator Bongbong Marcos, Senator Grace Poe, Manila Mayor Isko Moreno, and Senator Manny Pacquiao – are included in the thumbnail along with a picture of Eleazar pointing having a speech bubble, saying, “WAG NYO KO SUBUKAN!” (Do not test me!)

Eleazar only reminded and warned political candidates to stay away from the extortion activities of the Communist Party of the Philippines (CPP) and the NPA, its armed wing, specifically through the “permit-to-campaign fee.”

“I want to remind persons planning to run in the elections that giving in to this demand for money by the CPP/NPA would mean giving the communist rebels financial support and would make them liable for violation of several special laws including the Anti-Terrorism Act of 2020,” Eleazar said in a PNP press release on June 21.

In the video, a photo of the “permit-to-campaign fee” released by the PNP, as well as Duterte’s message to the nation last June 21, were used as the basis of the claim. However, the photo and the video do not prove the claim.

In Duterte’s speech, he threatened to arrest people who refused to get the COVID-19 vaccine. “Kung ayaw mong magpabakuna, ipaaresto kita, at ang bakuna itusok ko sa p’wet mo,” he said. (If you do not want to get vaccinated, then I will arrest you, and I will inject the vaccine into your butt.)

Candidates may face charges for financially supporting terrorist groups and organizations under Section 3 of Republic Act 10168 or the Terrorism and Financing Prevention and Suppression Act of 2012 in Proclamation no. 374, according to an article published by the Philippine News Agency entitled, “PNP braces for NPA’s extortion activities as elections near,” as well as from a press release by the PNP.

Moreover, no news reports prove that Eleazar dismissed any candidates for the 2022 elections. The PNP chief doesn’t have that power or authority.

The Commission on Elections (Comelec) is the primary government agency that enforces and administeres laws and regulations concerning elections, including disqualification of candidates.

Section 4.2 of Resolution No. 10481 says that the PNP and Armed Forces of the Philippines (AFP) may file a request with the Committee on the Ban on Firearms and Security Personnel (CBFSP) for Comelec control.

Comelec control allows the poll body to have immediate and direct control and supervision over national and local officials and employees, as well as full control over all national and local law enforcement agencies as defined under Section 2 of Resolution No. 10481.

Meanwhile, Section 2, Rule 25, of Comelec Rules of Procedure says that “any citizen of voting age, or duly registered political party, organization, or coalition of political parties may file with the Law Department of the Commission a petition to disqualify a candidate on grounds provided by law.”

Lastly, politicians or nominees can only become official candidates when the campaign period starts. Therefore, until the filing of certificates of candidacy in October, no politician is considered a candidate. Alshana Ann Almeda is a Rappler intern. This fact check was reviewed by a member of Rappler’s research team and a senior editor. Learn more about Rappler’s internship program here.