FALSE: Tilapia was introduced to Philippines during Marcos presidency 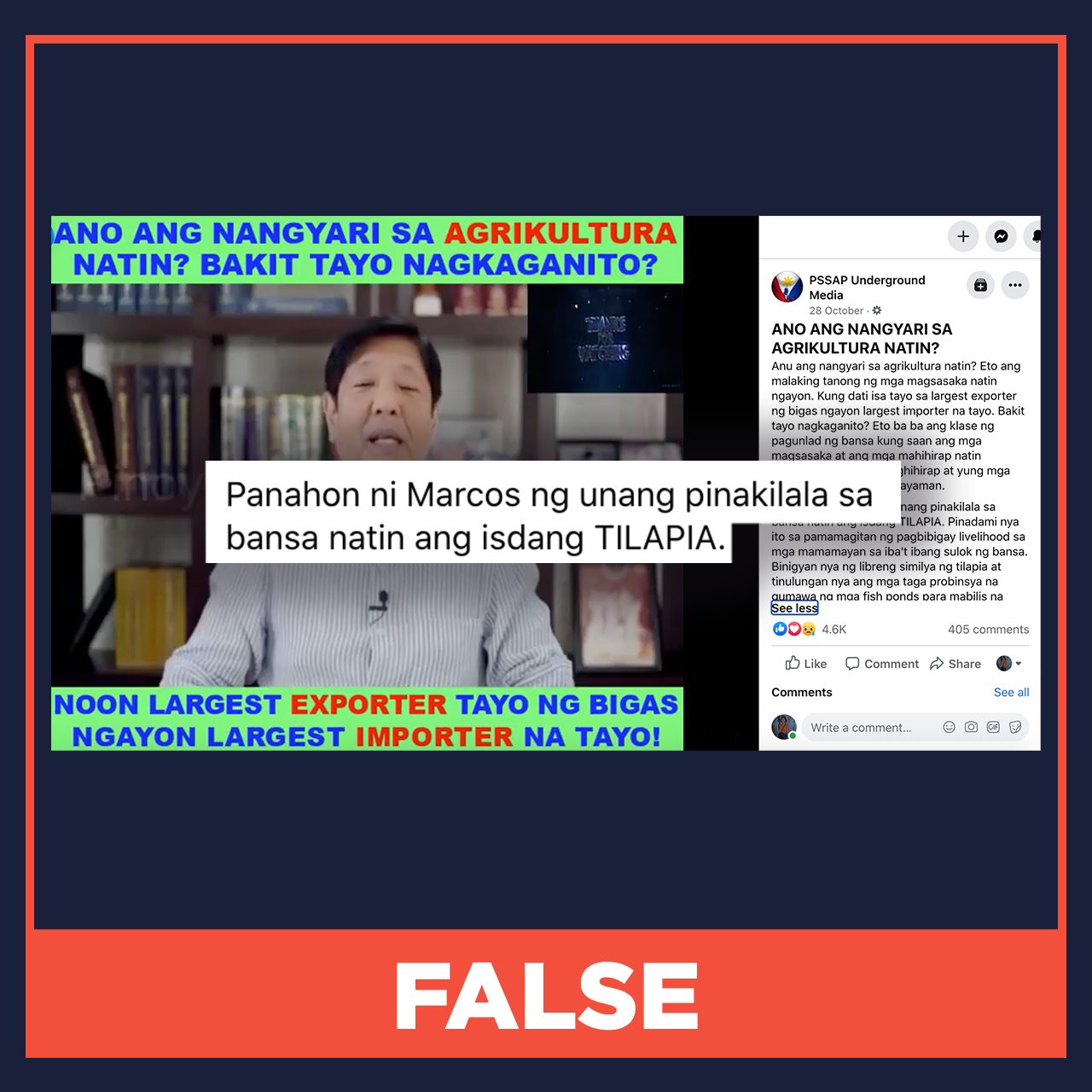 Facebook Twitter Copy URL
Copied
Tilapia was introduced to the Philippines in 1950, before Ferdinand Marcos’ presidency began in 1965

Several Facebook posts contain the claim that tilapia was first introduced to the country during the administration of former president Ferdinand Marcos, which happened from 1965 to 1986.

Tilapia was introduced to the Philippines in 1950, through the initiative of biologist Deogracias Villadolid, the director of the Bureau of Fisheries at that time.

In the publication “The Specialized Philippine Enterprise Reference of Experts and Scientists” (SPHERES) by the Department of Science and Technology (DOST), Villadolid’s profile states: “It was Dr Villadolid who introduced tilapia in the Philippines in 1950 when he was Director of the Bureau of Fisheries. He also initiated fisheries education in the country. For this reason, he is known as the Father of Fisheries Education in the Philippines.”

This profile can also be found in an article by librarian Melchor V. Cichon titled “Father of Fisheries Education in the Philippines” published in the January-March 1996 issue of the journal Otolith. This was republished by the Iloilo-based publication Daily Guardian.

Villadolid has numerous contributions to the field of marine biology and fisheries education. He has over a hundred publications in his name. Some of his published titles mentioning “tilapia” listed in the “Publications” section of his SPHERES profile were published from 1954 to 1960, which shows that tilapia cultivation was already put into practice in the country before Marcos’ presidency began in 1965.

An article by Rafael D. Guerrero III titled “Farmed Tilapia Production in the Philippines Is Declining: What Has Happened and What Can Be Done,” published in the June 2019 issue of DOST’s Philippine Journal of Science, also acknowledged tilapia’s introduction to the Philippines during 1950. It said: “While the milkfish is an indigenous fish, the Mozambique tilapia (Oreochromis mossambicus) was first introduced in the country in 1950 from Thailand followed by the Nile tilapia (O. niloticus) in 1972 and other species (O.aureus, O. hornorum, Coptodon zillii, and Sarotherodon melanotheron).”

A document by the Food and Agriculture Organization (FAO) of the United Nations (UN), “Rural Aquaculture in the Philippines,” written by Wilfredo G. Yap, concurs with 1950 being the year of introduction of tilapia to the Philippines. This is stated in the document section 2.1.6, “Tilapia,” where it says, “In 1950 the late Dr Deogracias Villadolid, Director of the then-Bureau of Fisheries, brought in the first tilapia (Oreochromis mossambicus) from Thailand.”

PSSAP Underground Media’s claim was also shared by numerous Facebook groups and pages. Others posted a similar claim on their own. Below is a partial list:

The post also claimed that the Philippines did not export rice after the Marcos administration, but this is false.

Rappler has fact checked “PSSAP Underground Media” before when they said the Priority Development Assistance Fund (PDAF), or “pork barrel,” was part of the Philippine Constitution and a “legacy” of former President Corazon Aquino. – Percival Bueser/Rappler.com