FALSE: Video shows people being rescued due to Typhoon Ulysses Facebook Twitter Copy URL
Copied
The video is taken out of context. It shows rescue efforts in Guatemala due to Hurricane Eta. 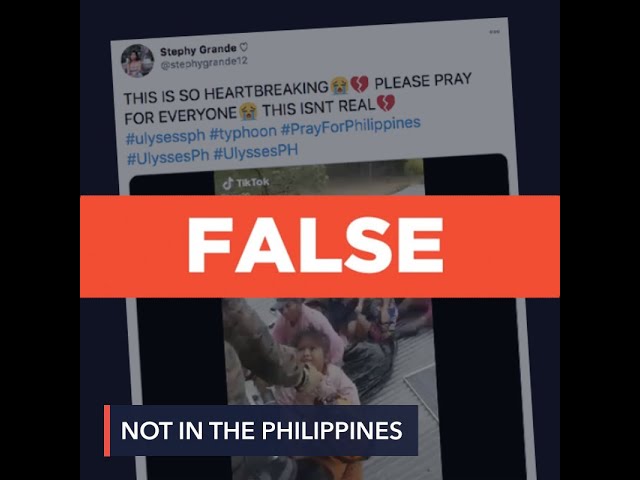 Twitter user @stephygrande12 posted a video on the morning of November 12, supposedly showing people being rescued from the roof of a structure after the onslaught of Typhoon Ulysses (Vamco).

It was captioned, “This is heartbreaking. Please pray for everyone. This isn’t real,” along with hashtags such as #UlyssesPH and #PrayForPhilippines.

This claim was emailed to Rappler for verification. The tweet has acquired 6,100 retweets, 2,300 quote tweets, and 10,100 likes as of writing.

This is false. Using reverse image search, Rappler found that the video was taken in Guatemala and was posted on November 7, after Hurricane Eta battered Central America.

It was tweeted by Guatemalan President Alejandro Giammattei with a caption that translates to: “We will continue with the rescue efforts of each family and each Guatemalan. United we will emerge from this emergency.”

It was also tweeted by the Guatemalan Ministry of National Defense with a caption translating to: “[#GuatemalanArmy] through the Guatemalan Air Force and the Humanitarian and Rescue Battalion, they carry out rescue operations for people who are in areas affected by the [#TropicalDepressionETA], in the department of #Izabal.”

Typhoon Ulysses hit land in Quezon Province on Wednesday, November 11. It was over the West Philippine Sea as of Thursday afternoon. – Loreben Tuquero/Rappler.com