Why Duterte’s message of ‘care and power’ attracts It could be one of your officemates passionately explaining Rodrigo Duterte’s platform, a high school classmate who constantly posts Duterte quotes or memes, a taxi driver proudly sporting a Duterte baller, or even your doctor making a heartfelt defense of Duterte’s latest controversial remark while you wait in his clinic.

Duterte’s supporters are outspoken, both online and offline. Online data shows they are the most engaged on social media, making Duterte’s name trend on Twitter, voting for him diligently in online surveys.

The Davao City mayor has supporters from all social classes: from market vendors who label their fruits and vegetables with his name to businessmen who transform their SUVs to shiny Duterte posters on wheels. 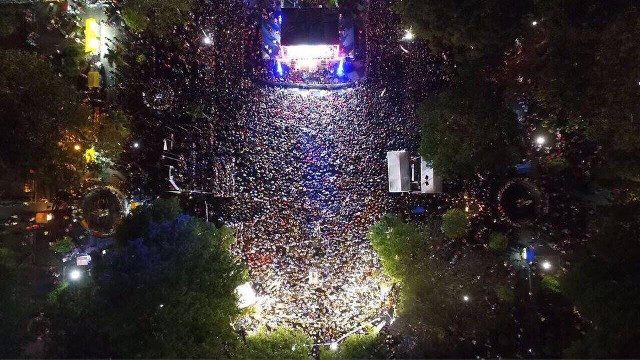 But you ain’t seen nothing yet until you attend his rallies. Jam-packed football fields and plazas. Filled-to-the-brim auditoriums and covered courts. Many of these crowds, sometimes numbering tens of thousands, are not given food or drink by organizers.

Most wait 6 hours or more for Duterte to arrive. I talked to a mother who was in the venue by 8 am. Duterte, perenially late, showed up at 6 pm.

Watch this woman go from disappointment to joy after waiting 5 hours for #Duterte in Valenzuela City #PHVote pic.twitter.com/K8SuuFaee3

Was she angry to be waiting? No. It would all be worth it to catch a glimpse of Duterte, she said. True enough, the crowds are almost hysterical when he arrives. I’ve seen women cry at the sight of him or jump over barriers and shove away his bodyguards to kiss him on the cheek.

Once, a sea of supporters in Batangas broke the glass door of the Lipa mayor’s office in their determination to follow Duterte.

Political analysts say this is Duterte’s secret weapon: his emotionally-attached base of supporters.

“Duterte’s advantage is that he has emotionally-attached supporters. Supporters of other candidates choose by rational calculation but Duterte’s supporters give their whole heart and soul,” said UP political analyst Aries Arugay.

This emotional attachment could be one reason why a sizable chunk of Duterte’s support base are voluntary campaigners, not paid campaigners or “hakot.”

Arugay calls it a “grassroots” movement and even suspects that this level of volunteerism for a candidate can beat traditional political machinery when it comes to safeguarding votes. (READ: Over 600,000 OFWs mobilizing for Duterte campaign)

“It could trump machinery. The machinery is paid. People work for the machinery because they are hired. In Duterte’s case, it’s volunteerism,” Arugay told Rappler.

His message of ‘care’

So why the emotional attachment?

Those from lower economic classes are particularly swayed by the way he projects himself as a caring leader.

Foundational to this message is people’s perception of him as an “authentic” leader. (READ: Can Rodrigo Duterte win by being himself?)

“Duterte’s appeal lies in that he presents himself as an authentic person. Even if he curses, people perceive that as ‘nagpapakatotoo lang siya’ (he is just being true to himself),” said Cornelio.

His gutter language, his crass jokes, his constant reminders that he is an “ordinary person”, even his flirting with local women reinforce the perception that he is “from the people, for the people.”

The poor are more likely to have an “emotional affinity with a man who is one of the people,” says Cornelio.

In this sense, the emotional vote is not necessarily an irrational vote, says Cornelio. It’s still a calculated decision to support someone who cares for you, who seems to have your best interests at heart.

Roxas is likely not less sincere in his intention to serve the country, but what matters is how the less privileged perceive him.

The US-educated former secretary with a famous surname is very careful with his words and often speaks the “language of technocracy” which can be cold and alienating to poor Filipinos.

“If he was applying as CEO, he would get the job. But the president is also head of state. He carries with him a very symbolic role,” says Cornelio.

Roxas’ attributes do not necessarily match with attributes most important to a Filipino voter which Cornelio listed down as, “concern for the poor, having principled stance, and personal integrity.”

It doesn’t help that Roxas is heavily associated with the Aquino administration, an administration that is more and more perceived as being “cold and distant.”

President Benigno Aquino III has been “missing in action” in some of the biggest crises of his 6 years in power like the Manila hostage-taking, Mamasapano massacre, and Kidapawan protest, said Cornelio.

“The Aquino administration is not known for empathy,” he added.

Compare this to how Duterte supporters promote his image.

They post old photos of Duterte wading shin-deep in a flood as he assists in disaster response efforts, they tell stories of how Duterte offered himself as a hostage in a prison riot, they share every moment he facilitated the release of hostages from New People’s Army rebels. Duterte is perceived as a man of action, always in the thick of things, involved with the concerns of the people.

“That’s why he can present himself as a credible savior, like Jesus Christ, caring. One who loves us no matter what. You will support someone who cares for you,” said Cornelio.

No wonder Duterte’s support base has been described as “cult-like” by some people. It’s the manifestation, said Cornelio, “of the desire for a messiah, a caring messiah, a messiah who is one of us.”

His message of ‘power’

The “caring leader” attracts the biggest chunk of voters, the Classes D and E. But Duterte is also the top pick of the middle- to upper-class. Why so?

It has to do with the second part of Duterte’s dual message: that he is a powerful and strong leader. (READ: The Punisher and The Bully)

Cornelio describes those from Classes ABC to be mostly urban dwellers. “These are people who want discipline and public order in the city. Duterte is perceived as the man who can make it happen,” he explained.

The pervading sense among well-to-do Filipinos is that though there were many gains in the Aquino administration, these gains have not yet translated into more orderly cities, better infrastructure, more disciplined citizens.

While there has been a crackdown on corrupt politicians with the highly-publicized pork barrel investigations, corruption persists in agencies like the Land Transportation Office and Bureau of Customs.

The upper class just want a leader who can fix these problems so they can attend to their concerns in peace – whether it’s making their businesses grow or bringing their children to school safely.

For Duterte supporters in this economic class, Davao City, his “exhibit A,” is proof he can deliver. His emphatic, if simplistic, “Just stop it. I’ll do it,” is a welcome antidote to the Aquino administration’s many-worded platitudes with supposedly less action on the ground.

Duterte’s message of power attracts voters who may not be swayed by his message of care. Compare this to Grace Poe who is “all care, none of the power,” says Cornelio.

Lack of experience continues to be one of the criticisms lobbed at Poe.

One Duterte supporter in Valenzuela told me he used to support the neophyte senator but realized “she doesn’t have the political will Duterte has.”

Another supporter in Catanauan, Quezon even dismissed Poe just because she is a woman. “She’s too soft. She can’t make tough decisions,” he said.

If this dual message is working for Duterte, it will also put a ton of pressure on him if he wins.

With less than two weeks before election day, voters should be mindful of what to reasonably expect from their candidates.

Supporters must ask themselves if they should be satisfied with a sparsely explained anti-crime promise and theatrical pronouncements on his last resort should China continue to contest Philippine jurisdiction over the West Philippine Sea.

Voters should appreciate the massive gap between the job of a mayor, no matter how large his city is, and the job of a president.

“Can he transcend being a city mayor? Because the Philippines is not just Davao magnified. It’s more complex. It’s a different ball game,” said Arugay.

The end-game is close at hand, and in a few days we will see if Duterte’s dual message will propel him to Malacañang. – With a report from Patty Pasion/Rappler.com