Hospitals in the Philippines: Where they are – and aren’t 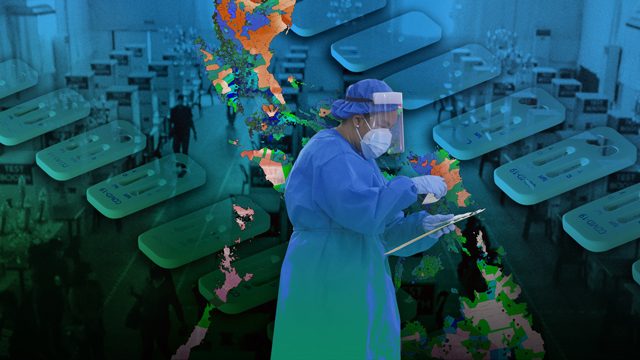 Facebook Twitter Copy URL
Copied
There is a big difference between urban centers and remote areas, echoed by a stark contrast in poverty incidence

MANILA, Philippines – COVID-19 is by far, one of the worst crises we’ve lived through. As it spread around the world, it exposed cracks in healthcare systems across different countries. Like others, the Philippines’ healthcare system has been struggling to cope.

As of May 18, the country has seen over 12,000 cases and 800 deaths, and has conducted tests on more than 200,000 individuals. Despite great efforts from the public and private sector, the country has a ways to go in terms of healthcare infrastructure.

Though testing centers may have been allocated based on the current COVID-19 situation, the issue of placing healthcare facilities will remain long after the pandemic.

Having enough healthcare facilities is crucial. Unfortunately, resources appear not to be distributed evenly in all areas, which ties in issues of poverty and access to healthcare.

Given the 2020 budget, we hope that the Department of Health’s P172.37-billion budget and the rollout of the Universal Healthcare Law are steps towards addressing this.

We obtained data from the DOH list of healthcare facilities, and selected all facilities listed as hospitals. To be clear, this means smaller clinics, infirmaries, rural health units, and barangay health stations are not included.

The DOH declared that level 2 or 3 hospitals can care for COVID-19 patients, since these have intensive care units (ICU) needed to house severely ill patients. In this analysis, however, we included level 1 and non-accredited hospitals to see which areas have facilities that can be improved upon, and those without facilities at all.

This map shows the location of different hospitals throughout the country, which allows you to select or remove hospitals by level (1, 2, 3, or none).

There is a big difference between urban centers and remote areas, echoed by a stark contrast in poverty incidence. Hospitals are mainly clustered around Metro Manila, and smaller clusters appear in cities like Cebu, Iloilo, and Davao.

It makes sense that cities are hubs for healthcare – they have more people, and get first access to resources. This leaves Filipinos in more rural areas at a big disadvantage.

We plotted the different municipalities, and colored them using their population density (i.e., the number of people per square kilometer, using the 2015 census) – darker means more densely populated. We also colored the points by ownership – blue for government hospitals and orange for private hospitals.

Many municipalities are colored green – putting their population density at around 100 to 300 people/km2, which include places like Catarman in Samar or Sagada in Mountain Province. From the graph, many of these areas only have one or two – or sometimes no hospitals – in their vicinity.

If you remove the private hospitals (unclick the orange button on the map that says private), it leaves entire blocks of municipalities without hospitals in their vicinity.

This poses a big challenge for poorer Filipinos who cannot afford private hospital fees. It is almost no wonder that 7 out of 10 Filipinos die without seeing a doctor.

Summary stats: How many hospital beds does an average municipality have per 1,000 people?

From past figures pulled from the World Bank, this is how we stack up compared to our ASEAN and other neighbors.

Countries with comparative economic situations to ours like Malaysia and Vietnam fare relatively better than the Philippines. In the country, most municipalities do not even surpass 1 bed per 1,000 people.

What exactly does this mean? Let’s take Quezon City as an example. In 2015, Quezon City had 2.9 million people. As of the last DOH update, Quezon City also had 9,438 beds. Using this ratio, for every 1,000 people, there are 3 hospital beds available. If even just 10% of Quezon City got sick, that would still mean 30 people would need to share one bed.

It’s important to note that these only account for beds in hospitals. During a crisis, barangay health stations and rural health units can provide beds which have not factored into this analysis, as well as quarantine facilities that the government has put up for the pandemic.

Unfortunately, hospitals may have been attributed to neighboring municipalities due to mismatches between the map and DOH data.

Summary stats: How far is an average municipality from the nearest hospital?

Though there may be hospitals in the municipality, people will have difficulty reaching it if it’s far. This is especially true for people with no transportation, who are forced to walk to hospitals.

The disparities between urban and rural centers are huge. In Metro Manila, the average city center is 660 meters away from a hospital, and the top 10 most populated provinces (2015) average 6.36 km. As for all other municipalities, the nearest hospital is 13 km away on average.

This is terrible news for our fellow Filipinos with no transportation, who might have to walk to get there. So how far is 13 kilometers? It’s the distance walking on EDSA from Quezon MRT Station in Quezon City, to Magallanes Station in Makati.

While there are blocks of remote municipalities in Palawan, Samar, and Cotabato, those who have it worst are – unsurprisingly, islands scattered across our inland seas. Agutaya, a group of islands located west of Panay, is 42 km from the nearest hospital – by boat. The same goes for Concepcion, east of Mindoro, and Tawi-Tawi in Mindanao.

Using the municipality center as a proxy for distance does not capture the distance for all points in a municipality. For a more detailed map showing walking distances to the nearest hospital, check out the one below.

The COVID-19 pandemic has highlighted the importance of an effective and comprehensive healthcare system. Government must improve our system, and continue working towards accessible healthcare for all. – Rappler.com

LJ Flores is an intern at Rappler and a student at Yale University studying statistics and data science. He enjoys learning new things, indie music, and good coffee.

Shapefiles were obtained from PhilGIS, while hospital data was obtained from the DOH list of healthcare facilities, and mapped to shapefile polygons using Philippine Standard Geographic Codes from Thinking Machines. Information from the list was checked against information from Dashboard PH.

This story was made in partnership with TheNerve, a Manila-based consultancy that specializes in bringing together valuable data insights and meaningful narratives.