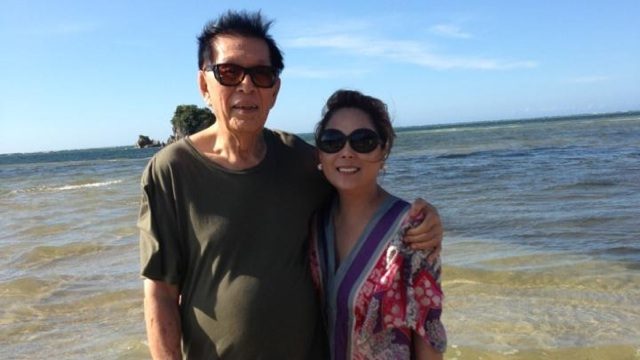 Facebook Twitter Copy URL
Copied
REPUBLISHED: ‘She is the sort of person who will protect her principal, but will not do anything against his interest or without his permission’

This story was first published on October 1, 2013. We are republishing it due to renewed public interest after the Supreme Court ordered on January 19, 2023, the release of Gigi Reyes from detention after nine years.

MANILA, Philippines – It’s perhaps the unlikeliest of relationships. She was a student activist in her college days at the University of the Philippines (UP), while he was the defense minister who implemented Martial Law under the regime of Ferdinand Marcos.

His marriage of 55 years has borne two adult children linked to past controversies, while her marriage, known to have ended, has produced 3 kids, none of whom have been publicly controversial. She is 30 years younger than the man she calls “The Boss,” an intelligent and astute politician who has survived many political upheavals, including rebellion charges against him.

Abrasive and cutting as he wishes, most especially to political enemies, former Senate President Juan Ponce Enrile or JPE has a “special fondness” for his former chief of staff Jessica Lucila “Gigi” Reyes, say those who have been in the Senate for decades.

On past occasions, they add, they have seen Enrile give Reyes a hug and a buss on the forehead. He values her loyalty, for sure, as well as her professional competence. Gigi Reyes was regarded as “the door, if not the bridge, to JPE.”

But at least twice, JPE tried to dispel notions that there was anything more than a professional relationship between them. In January 2013, during an interview on television, he said, “If they’re implying that she’s my girlfriend, well, I’m too old for that, my God!”

That was in reaction to insinuations made in a privilege speech by fellow senator Alan Peter Cayetano about a relationship between Enrile and his then-chief of staff. Cayetano’s speech was in retaliation for Reyes’ accusations of hypocrisy against him for supposedly receiving a “cash gift” from the Office of the Senate President. The ugly incident ended with an apology and the irrevocable resignation of Reyes from Enrile’s office.

Before that, the first public denial came way back in 1998 when the Chicago Tribune reported that Enrile’s wife Cristina left him after she could no longer tolerate his “alleged tryst with a top aide.”

In a statement, Enrile said in 1998: “What is totally false and malicious are the reports in the press and the rumor mills that the cause of our marital difficulties is an alleged relationship between me and my Chief of Staff, lawyer Gigi Reyes. There is no relationship, other than an official and professional one.”

The issue would not have mattered, nor would it have been of public interest, were it not for plunder charges involving the alleged misuse by lawmakers – including Enrile – of billions of pesos from their Priority Development Assistance Fund (PDAF). Reyes was among the respondents named in the complaint filed by the justice department with the Office of the Ombudsman on September 16.

She is accused of signing documents that facilitated the release of Enrile’s PDAF to fake non-governmental organizations (NGOs) linked to Janet Lim Napoles, the woman said to be behind the intricate web of corruption and deception involving pork barrel funds.

In an affidavit submitted by Merlina Suñas, among the witnesses in the PDAF scam, Reyes is mentioned as being among the recipients of commissions given by Napoles to legislators and their staff.

When Enrile’s lawyer Enrique dela Cruz defended his client, saying the former Senate president “never authorized anyone to enter into an illegal transaction. If they did, it’s outside their authority and they should be held responsible,” many took notice. It signalled that Reyes was going to be left hung to dry.

Obviously hurt by Dela Cruz’s pronouncement, interpreted as having been made with the blessings of Enrile, Reyes spoke about “travesty and betrayal” in a September 21 post on her Facebook page. In all capital letters, she wrote, “The worst blow has just been dealt upon me by no less than the camp of Senator Juan Ponce Enrile, the man I served with full dedication, honesty and loyalty for 25 years.”

The following day, emerging from a four-day hospitalization, Enrile made an appearance in the Senate and said: “I am not out to betray any of my people. I’ve never been known for that.”

It was as if “The Boss” and his loyal staff were communicating with each other through the media.

Described as “charming with a high EQ (emotional quotient),” Reyes graduated from the UP College of Law in 1987. Regarded as “one of the boys” back then, she became vice chair of the UP Arts and Sciences Student Council. Among her contemporaries in the early 1980s was student activist Lean Alejandro, who was vice chair of the UP Student Council. Alejandro would later be ambushed and killed.

The ’80s was marked by student unrest fueled by the assassination of opposition leader Benigno Aquino Jr. in 1983 and the earlier sham presidential elections of 1981. Student leaders influenced by polarized ideologies of national democracy (NatDem) and social democracy (SocDem) organized rallies that condemned the Marcos dictatorship and the pseudo lifting of Martial Law.

The political winds of change would blow up with the 1986 People Power uprising, which Enrile and then Armed Forces Chief of Staff Fidel V. Ramos supported.

As a student leader, Reyes was not a firebrand. “Articulate, sharp, and very intelligent,” the NatDem-influenced Reyes was “acceptable even to the non-Left,” her contemporaries said. Aligned with the student group SAMASA, they engaged in nasty polemical exchanges with their rival Tugon, which was associated with the SocDems.

After law school, Reyes joined the Pecabar law firm of Ponce Enrile, Cayetano, Reyes, Manalastas. It was 1988 and it was there where she met Enrile.

By the early 1990s, she was brought to the Senate to work as technical/legal staff before eventually being appointed chief of staff in the mid-1990s, Senate staffers recalled.

Very close to her father Pat Gonzales, editor in chief of the Martial Law-era Bulletin Today, Reyes probably saw in Enrile her own father, said a former Senate staff. She worshipped Enrile the same way she worshipped her father, who died of a heart attack.

As Enrile himself would tell the Inquirer in January, “I call her up every day, even in the wee hours if I suddenly think of something I need to have ready the following day. She takes care of everything for me. I have no time for details.” As the Senate staffer said, “Gigi devoted her life to him.”

Before her September outburst on Facebook, Reyes wrote on the occasion of Fathers’ Day last June: “JUAN PONCE ENRILE…public servant, politician, friend, boss…but first and foremost…A LOVING FATHER. When he takes you under his wings, he will love and protect you at all cost…with self-abandon and self-sacrifice. Jack and Katrina, thank you for sharing your father’s love to us all who love him so dearly and are grateful for the profound and essential kindness of this great man. HAPPY FATHERS DAY TO THE BEST BOSS ANYONE CAN HAVE!”

Much earlier, Gigi’s ex-husband, lawyer Rodolfo “Inky” Reyes, tried to mask trouble in their marriage, even going to such extent as faxing a statement to reporters to say, “I am positively sure that he (Enrile) wouldn’t do anything to hurt us or our marriage.”

More than a decade later, however, he openly declares that he is now married to Aimee Vesagas-Reyes and has three sons. He is also active in the Victory Christian Fellowship, where he leads bible discussion groups.

Gigi Reyes would have been a politician’s ideal wife. She was popular in the Senate and did not push her weight around. Her only weakness perhaps was expensive jewelry and designer bags.

She was open to issues being brought up to her principal to push or advocate for, and was willing to help law school batchmates and even people she did not know very well. Her own law school batch donated a room in the UP Law School building named after Enrile, who was chosen guest speaker in their November 2012 law alumni homecoming. It was Reyes’ silver jubilarian batch that hosted the event.

The choice of Enrile was a controversial and hotly debated one, given his role in the Marcos administration. But those who opposed it eventually acquiesced. After all, Enrile had steered the Senate past rough waters in the impeachment of former Supreme Court Justice Renato Corona.

Perhaps because of her proximity to power, Gigi Reyes was both feared and respected. She attended Senate caucuses and had easy access to JPE, even joining him during Estrada’s last night in Malacañang at the height of the EDSA Dos uprising in 2001.

Many approached her because they knew she was influential. Her 50th birthday bash was attended by senators, politicians, and even President Benigno Aquino III. When JPE launched his book recently, she was there. When Enrile’s son Jack made a bid for the Senate, she and her brother Patrick were very much involved in his campaign.

In a mock Senate poll held in May 2013, Jack placed No. 2, reaping the benefits of his father’s generosity to Senate employees, and Gigi Reyes’ persuasive presence.

She would be part of political decisions and deal with senators when needed. She is known to be close to senators Edgardo Angara (he was godfather in her wedding to former husband Inky), Jinggoy Estrada, Chiz Escudero, Bong Revilla, and, of course, had known Napoles herself.

In the past she would fly to Macau to look for potential locators in the Cagayan Economic Zone Authority in Enrile’s bailiwick. On August 31, Reyes again left the country for Macau – before the complaints were filed against her and Enrile with the Office of the Ombudsman.

As an administrator, she was very good and “very efficient,” Senate insiders said. But she was not the type who would do things on her own. “Boss, okay na ba ito (Boss, is this okay?)” she would often ask Enrile, checking with him on major decisions.

“She is the sort of person who will protect her principal, but will not do anything against his interest or without his permission,” said one who knew her. “Whatever she did had the blessings of JPE.” – with Marites D. Vitug/Rappler.com