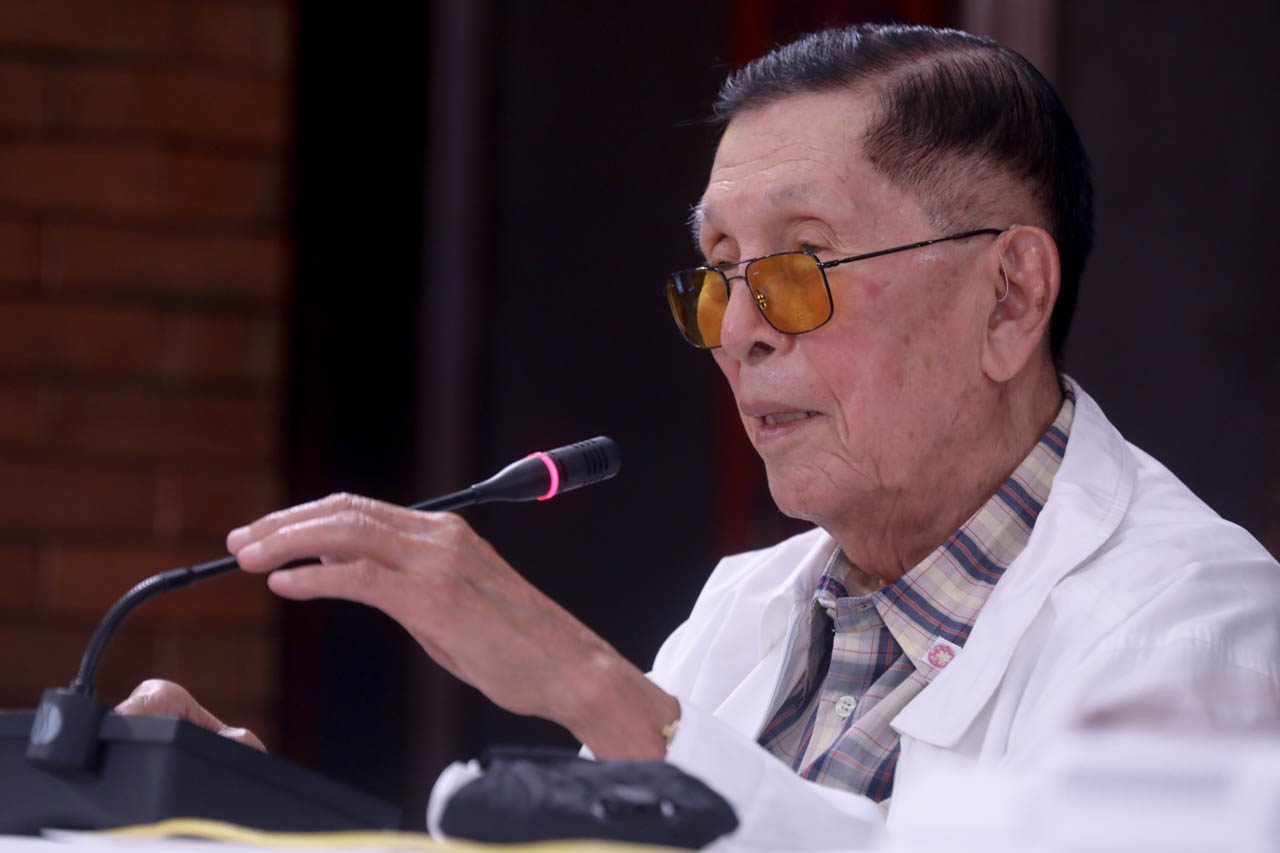 TURNAROUND. Former Senate President Juan Ponce Enrile shares his narrative with President Rodrigo Roa Duterte on the West Philippine Sea before the President's address at the Malacañang Golf Clubhouse on May 17, 2021.

A political has-been who had receded from the public view resurfaced on Monday night, May 17, to give life to a regime’s policy of wooing China in the face of Beijing’s unrelentless bullying in the West Philippine Sea.

After the politician’s dismal showing in the 2019 midterm elections, everyone thought he, three years short of being a century-old, would simply slip into oblivion, enjoying the remaining years of his storied life reminiscing about his glory days in power.

But Juan Ponce Enrile found reason to return to the political spotlight – courtesy of President Rodrigo Duterte, no less.

Duterte was not disappointed because Enrile supported his bilateral approach to resolve the maritime dispute with China – a turnaround from the former senator’s position when he backed former president Benigno Aquino III’s decision to internationalize the issue.

Enrile, sitting as Senate president back then, was 100% behind the Aquino administration’s plan to seek support from allies after China deceived both the United States and the Philippines and seized control of Scarborough Shoal after a three-month standoff.

Enrile’s turnaround is not surprising, as it has characterized his relations with strongmen in power.

A brilliant lawyer, Enrile was first recruited by then-president Ferdinand Marcos when he won against reelectionist Diosdado Macapagal in the 1965 election. He was Marcos’ first finance secretary for two years from 1966 to 1968, after which he became justice secretary from 1968 to 1970.

When Marcos won a second term as president in 1969, he appointed Enrile as his defense secretary in February 1970, a post he held until August 1971. He was reappointed in January 1972 to the same post, but this time as defense minister. This period was marked by student unrest and rebellion from both Muslims in the south and a ragtag New People’s Army in Central Luzon.

Marcos imposed Martial Law in September 1972 to stay in power beyond the limits of a two-term presidency under the 1935 Constitution.

Enrile even gave him an excuse to declare military rule by staging his own ambush supposedly by communist rebels in a gated village in Mandaluyong. Fourteen years later, he would reveal the incident was fake.

As the chief implementor of Martial Law, Enrile – also the longest-serving defense chief in the country – has been accused of being an accomplice to the arrest, jailing, torture, and killing of thousands of people, some of whom just disappeared.

His power increased under Marcos after he was elected in 1978 as a member of the Interim Batasang Pambansa, the dictator’s rubber stamp parliament under the 1973 Constitution. He won again in the 1984 parliamentary election.

But as Marcos’ health started failing, the ambitious Enrile began planning to succeed him, building his own political power base and cultivating loyal Armed Forces officers built around his own security detail led by then-Army lieutenant colonel Gregorio Honasan II.

Enrile was not alone. There were other political forces aspiring to replace Marcos. The February 1986 snap presidential election gave the Cagayan-born politician a chance to seize political power.

The mutiny by his loyal soldiers was discovered, but before Marcos and his loyal generals led by Fabian Ver could make a move, Enrile announced his breakaway from the dictator, enlisting the support of a well-respected, West Point-trained general, Fidel V. Ramos.

The Filipino people pardoned Enrile’s sins during the dark days of the dictatorship and he was hailed a hero overnight.

But the unrepentant Enrile lusted for power. He realized it was a mistake to hand over power to the martyred senator’s widow, Corazon Aquino.

Fresh from the victory of the February 1986 “People Power” uprising, he set into motion another power grab, codenamed “God Save the Queen,” in November of the same year, when Aquino was visiting Japan.

The playbook was taken from Suharto’s coup in Indonesia in the mid-1960s – Enrile blamed the rising influence of communists in the Aquino government. The plan would start with the brutal kidnapping and killing of left-wing labor leader Rolando Olalia and his driver, and putting the blame on the Maoist-led rebels for the Plaza Miranda bombing of 1971.

The coup fizzled out after then-chief of staff, General Ramos, stayed loyal to Cory Aquino, ordering troops to stand down, particularly members of the soldiers’ fraternity, Guardians Brotherhood, the foot soldiers in the political game.

As a result, Enrile was removed from the Cabinet and became a staunch critic of the administration after winning a Senate seat in 1987.

When Ramos succeeded Aquino as president in 1992, Enrile quietly slipped into the background as a congressman until 1995, and then made a comeback to the Senate, where he stayed  until 2001.

He fell from grace when he supported the deposed president Joseph “Erap” Estrada, and was among politicians who instigated the destructive EDSA 3 in 2001, which led to his defeat in his Senate reelection bid.

Taking a populist position against the high cost of electricity, he won a Senate seat in 2004. He was reelected in 2010, riding on his popularity as Senate president when controversy hounded then-senator Manuel Villar Jr., who quit his position as leader of the upper house of Congress.

Enrile became popular when he presided over the impeachment trial of then-Supreme Court chief justice Renato Corona. The trial resulted in Corona’s conviction.

Many people say “Manong Johnny” – as he was often called – could have been the country’s best president. Although he sought the presidency in 1998, he lost to the immensely popular Erap Estrada.

His popularity did not last long after he picked fights with fellow senators, first with Antonio Trillanes IV over the South China Sea issue, and later with the Miriam Defensor-Santiago over a bill on the Responsible Parenthood and Reproductive Health Act of 2012.

Enrile offered to resign as Senate president in January 2013 after Santiago exposed the distribution of money to fellow senators, except three lawmakers whom he was at odds with. Five months later, he resigned from the position because the issue continued to hound him.

His credibility further dipped later that year when he was linked, along with two other senators – Jinggoy Estrada and Ramon “Bong” Revilla Jr. – to the multi-billion-peso pork barrel scam of businesswoman Janet Lim Napoles. She has since been convicted of graft and malversation.

Enrile was briefly jailed in 2014 for plunder cases together with Estrada and Revilla. But he was released on humanitarian reasons because of his age and health.

He quietly bowed out of politics after his term in the Senate ended in 2016, but tried to make a comeback in 2019. He placed 22nd in a field of 62 candidates.

Many people admire Enrile’s astuteness and sharp mind even in his advanced age, but critics say he has selective memory, especially when questioned about his controversial political statements, particularly historical facts that were twisted to promote his own narrative and suit his own political objectives.

On Monday night, Enrile returned to the political limelight, perhaps to serve a political purpose.

He continues to battle a plunder case and 15 graft charges in the anti-graft court Sandigandabayan. Jessica “Gigi” Reyes, his former Senate chief of staff whom he was known to be fond and protective of, remains in jail for the pork barrel scam.

Could these cases be linked to Enrile’s zealous support for the Duterte administration? – Rappler.com