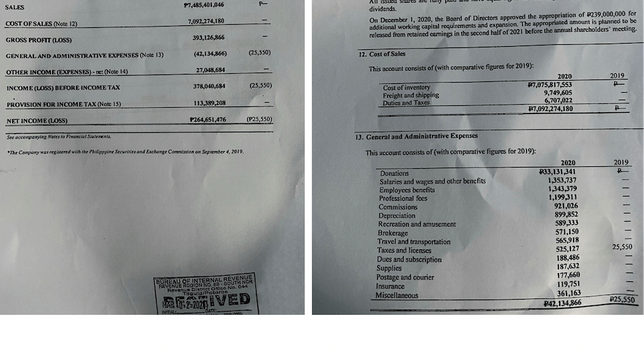 Facebook Twitter Copy URL
Copied
(1st UPDATE) Pharmally's financial statement for 2020 shows that its sales that year was a whopping P7.49 billion – indicating that all these may have come solely from the P7.9 billion contracts that it got from the government

After the Duterte government awarded Pharmally Pharmaceutical Corporation P7.9 billion worth of contracts in 2020 despite the latter having only P625,000 in paid-up capital, the newly registered company declared a net income of P264.7 million that year.

The company – whose executives have links to an ex-adviser of President Rodrigo Duterte and some of them wanted in Taiwan – is poised to earn more as the government has awarded them at least four additional contracts in 2021 totalling P2.3 billion.

Pharmally’s financial statement for 2020 shows that its sales that year was a whopping P7.49 billion – indicating that all these may have come solely from the P7.9 billion contracts that it got from the government.

Duterte, Malacañang, and COVID-19 plan chief implementer Carlito Galvez Jr. have all defended the government deals with Pharmally, saying it was the supplier who could deliver at the time.

This was despite former PS-DBM chief Lloyd Christopher Lao acknowledgment before senators that he could have been negligent in vetting suppliers like Pharmally. and Senator Risa Hontiveros’ revelation that Pharmally’s biggest shareholder, Huang Tzu Yen, and his father had been wanted for various forms of financial fraud in Taiwan since December 2020.

Rappler’s investigation shows how these companies is connected through a network to Yang.

All these left Pharmally Pharma P264 million in net income, driving its total assets to P284 million – a giant leap from its a little over half a million in assets in 2019.

Venture with another new firm

Of at least four pandemic contracts that Pharmally bagged in 2021, documents for which were accessed by Rappler from public databases, one was awarded by the DOH to Pharmally’s joint venture with another young company, Business Beyond Limits OPC (BBLOPC).

On March 15, 2021, when the DOH opened the bids, Pharmally Pharma in joint venture with BBLOPC joined. They had the second lowest bid, with Nikka Trading as the lowest bid.

However, Nikka Trading was declared non-responsive, and the DOH decided to go with Pharmally and BBLOPC.

According to Securities and Exchange Commission (SEC) documents, BBLOPC was incorporated in June 2020 to import, distribute, and trade medical supplies.

It had a single director, Sophia Mercedes Custodio, who subscribed P10 million worth of share capital. This amount remained the same up to yearend 2020.

BBLOPC’s nominee in its article of incoporation in 2019, Krizle Grace Mago, is the authorized representative of Pharmally Pharma in two of its 2021 contracts.

Editor’s Note: In an earlier version of this story, we reported that BBLOPC was incorporated in February 2019. It has been corrected to June 2020.