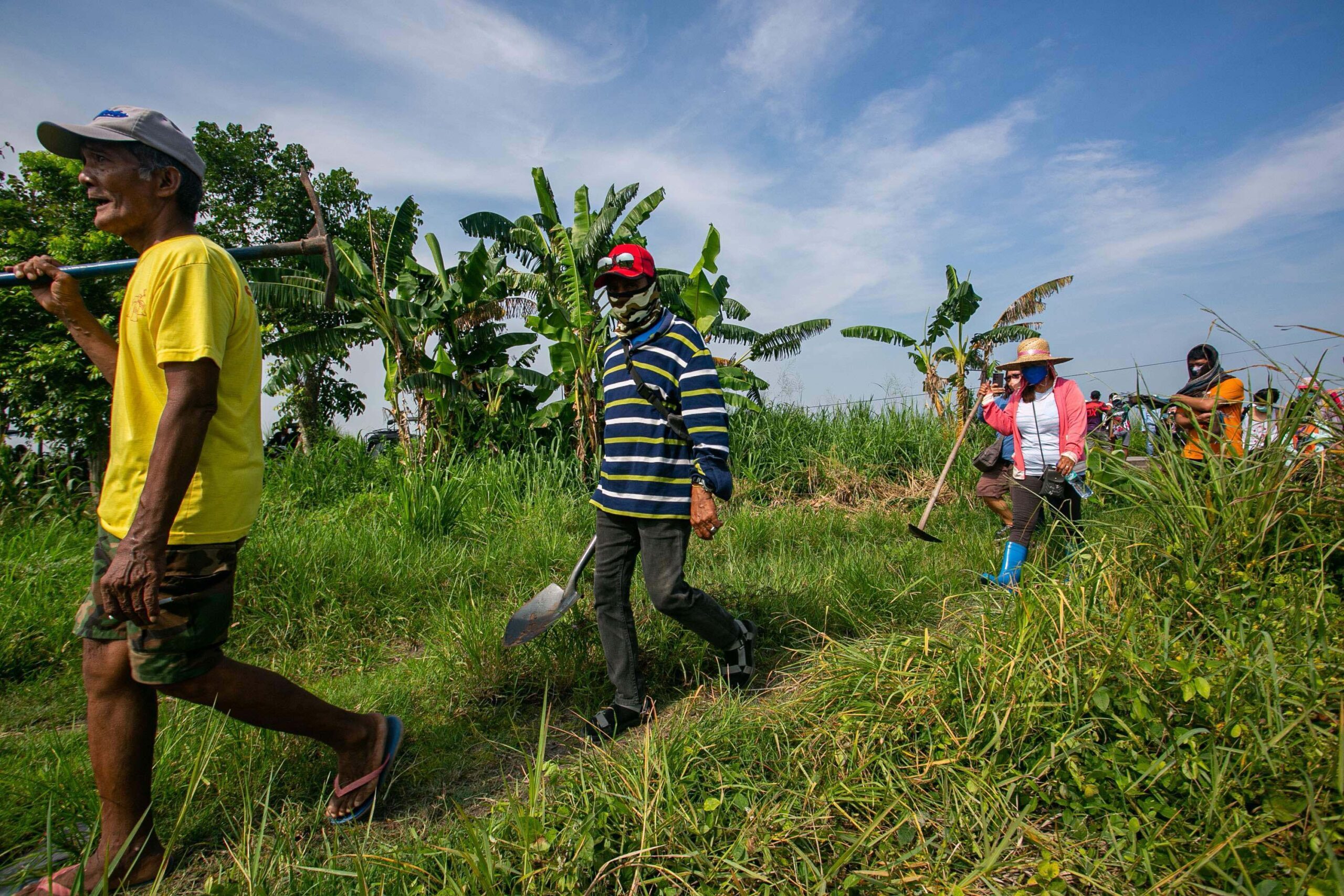 ASSERTION. MAKISAMA-Tinang farmers and advocates head to their June 9 bungkalan or cultivation activity to highlight their long wait for land already awarded to them by the Department of Agrarian Reform in 1995.

Facebook Twitter Copy URL
Copied
(UPDATED) An agrarian reform beneficiary could earn a P99,616 average yearly net profit per 10,000 sqm (roughly P8,300 a month) 'even without government support' if the community is organized, exercises collective management, and breaks dependence on a single crop By 2016, according to the Philippine Statistics Authority, the government had awarded 87.4% of the target lands to more than 2.8 million farmers, including those working in the previously exempted sugar industry.

Under the 1988 Comprehensive Agrarian Reform Law (CARL) signed by then-president Corazon Aquino, award meant the issuance of certificates of land ownership to agrarian reform beneficiaries (ARBs). But as the Hacienda Tinang case shows, award does not always mean possession or control of the land.

Twenty-seven years later, the farmers are still not in possession of the land.

The Hacienda Tinang narrative veers away from the traditional landowner vs farmers conflicts that erupted when sugar estates came under agrarian reform.

“It is a case of farmers vs farmers,” a former senior DAR official familiar with the Tinang case told Rappler on Monday, July 19.

It may not be that simple.

For one, the Tinang case displays a skewed balance of power. Numerous studies have also linked these agrarian face-offs between peers to divide-and-rule tactics by landowners or big cultivators exploiting loopholes in a government bureaucracy under the thumb of powerful political clans.

The Dominican Province of the Philippines offered 2 million sqm of Hacienda Tinang in 1991 under the voluntary-offer-to-sell model, the least problematic of CARL distribution options.

On this lush farm in the Central Luzon food bowl, activist farmers of the Malayang Kilusang Samahan ng Magsasaka ng Tinang (MAKISAMA-Tinang) and the Tinang Samahang Nayon Multipurpose Cooperative Inc. (Tinang SN MPCI) are battling each other for control of the land.

The DAR affirmed 178 ARBs as rightful owners of the 2-million sqm CARP block on June 20, weeks after the violent dispersal of MAKISAMA’s June 9 bungkalan or cultivation activity.

The DAR gave 94 MAKISAMA members 758,000 sqm and assigned 1.24 million sqm to 84 members of the cooperative controlled by the family of Concepcion Mayor Noel Villanueva. The agency told the ARBs it would distribute individual titles by the end of that month.

But on July 6, provincial agrarian reform officers (PAROs) Rogelio Marzan and Jocelyn Ramones said installation would have to wait for 58 other ARBs to complete validation requirements. Interviewed by phone on July 15, Marzan said, “The officers of Task Force Tinang are already gone, so we are waiting for the central office to reorganize.”

Installing MAKISAMA’s 94 members should not affect the interests of the other ARBs because the area is covered by a DAR-approved land survey, DAR External Affairs and Communications Assistance Secretary John  E. Laña told Rappler on Monday, July 18.

Laña is the vice chair and only remaining member of Task Force Tinang, which the DAR created to untangle the two parties’ conflicting agrarian claims.

The delay, according to MAKISAMA chairman Felino Cunanan and Abby Bucad, stems from the mayor’s lobby for an increase in the number of beneficiaries. 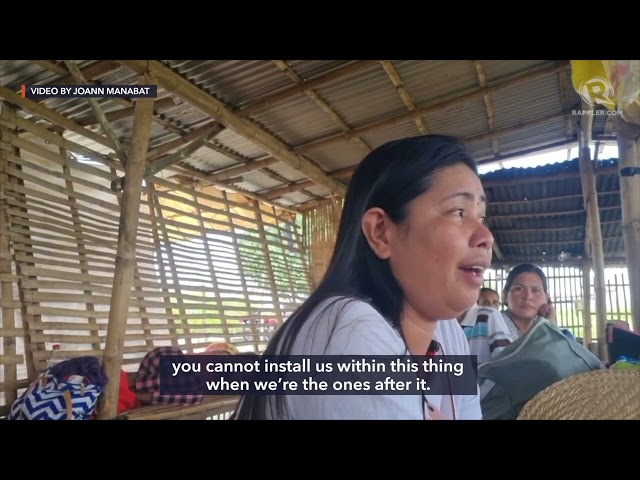 In a July 6 interview with Rappler, Villanueva confirmed that he wants 436 ARBs, to reflect the cooperative’s management of the hacienda from 1998 to 2018.

MAKISAMA lawyer Jobert Pahilga told Rappler the cooperative offered a “win-win solution” after police broke up the June 9 bungkalan and filed complaints against 83 participants, including 13 farmers: If MAKISAMA allows the increase in ARBs, all complaints related to the bungkalan would disappear.

The cooperative’s 1.24-million sqm share would then go up to 1.64 million sqm.

“The coop is not the owner, they cannot offer what they do not own,” was Pahilga’s response.

The municipal court in Capas, Tarlac has junked charges of illegal assembly and malicious mischief. Farmers and advocates still face additional complaints of disobedience to authority, obstruction of justice, and usurpation of real rights.

Villanueva defended the cooperative’s claim on Hacienda Tinang by citing its access to the Landbank of the Philippines’ credit program and the DAR’s funding of its projects. But the mayor’s main argument is based on a mysterious second CLOA, which DAR allegedly issued in 1998 after wrapping up inclusion-exclusion proceedings.

The process struck out more than 50 of the 236 original ARBs, including Cunanan, and added a hundred members of the cooperative, according to Villanueva. 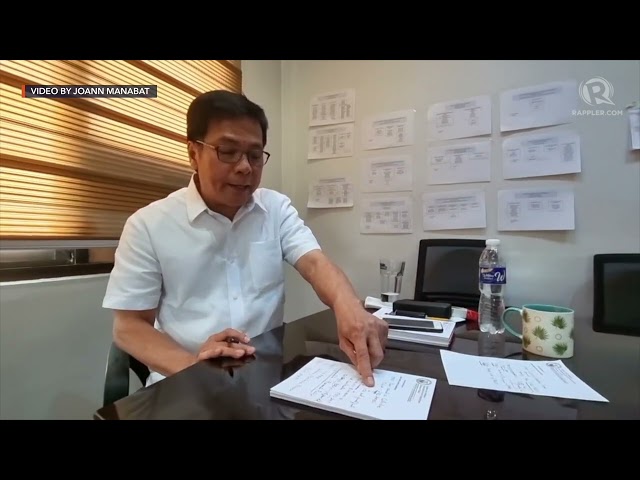 The Supreme Court in October 2018 ruled that the CLOA is the standard for proving land ownership.

The mayor’s problem is that DAR officials in the national, regional, and provincial offices have not seen a copy of this second CLOA. The cooperative’s February 25, 2022 petition for the revalidation also did not include the document, Laña told Rappler.

The mayor blamed the absence of the second CLOA on DAR’s incompetence. But the cooperative also never authenticated its copy of the CLOA, he admitted.

The cooperative was already established when 378 Hacienda Tinang farmers voted to join it in 1998, the year it took over the hacienda’s management.

Instead of undergoing a lengthy process of forming a new cooperative for Hacienda Tinang, “our elders suggested that since we already had a cooperative, the Tinang Samahang Nayon, we should just let them (new ARBs) join,” Villanueva told Rappler in a mix of English and Filipino. 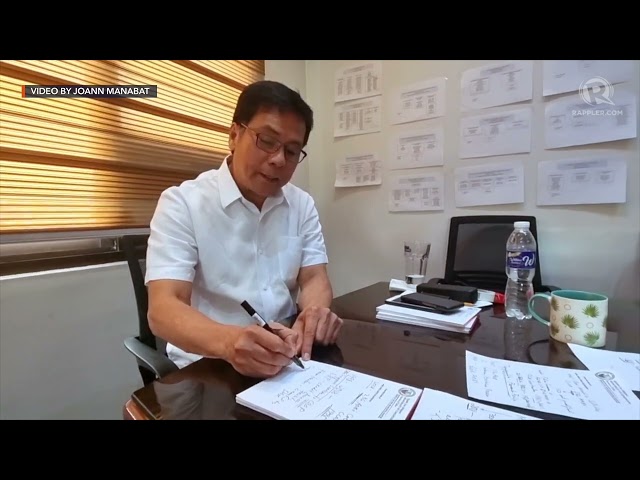 A 1989 Japan International Cooperation Agency (JICA) report on cooperatives mentions a Tinang Multi-Purpose Cooperative registered on December 15, 1988 with registration number RFIII-FF0159. This cooperative, according to the JICA document, was already handling ARBs on 3.52 million sqm of other sugar lands.

The cooperative has links to an even older one that managed emancipated rice lands under Presidential Decree 97, the agrarian reform program of the late dictator Ferdinand E. Marcos.

The 90 farmers who refused to join the cooperative formed MAKISAMA.

They learned of the 1995 CLOA only in 2016, when the wife of a cooperative member went to the DAR Central Luzon office after the cooperative struck out her husband’s name from the ARB list. Only then did MAKISAMA begin the long process of completing requirements for land distribution.

One thing stands out in the welter of claims and counter-claims: Villanueva is not a disinterested party. He is the head of a powerful local clan with substantial financial stakes in the cooperative.

A 1992 notarized Tinang SN MPCI articles of cooperation shows the mayor, brothers Vernon and Antonio, and five other Villanuevas as incorporators, with 62 of the total 240 shares, each person having paid P800 for an 8-share bloc.

The other incorporators are close allies or relatives of the mayor’s family, according to MAKISAMA.

Before winning a congressional seat for Tarlac’s 3rd district, Villanueva was already the town mayor. Vernon is a provincial board member and former barangay captain of Tinang. Another brother, Antonio, also served as municipal councilor and barangay captain. The mayor’s son, Erwin James, likewise served in the barangay before winning a council seat in the May 2022 elections.

The ARBs claimed Vernon was barangay captain at the time when the CLOA was kept from them. Antonio also occupied the same post from 2010 to 2013 and another Villanueva – Norman, from 2018.

Given the Villanueva clan’s experience in handling agrarian reform lands, and the power it has enjoyed in Tinang village and Concepcion town for decades, it is a mystery why they never registered the cooperative’s CLOA.

Like Hacienda Tinang’s farmers, many long-time CLOA holders are still not in control of awarded lands.

A 2017 report, “Socio-economic Assessment of the Philippine Agrarian Reform,” in the Agris On-line Papers in Economics and Informatics, said most obstacles come from local government units (LGUs) controlled by, or in the pocket of, landlords or big cultivators.

The report cites cases in Leyte and Negros Occidental where landowners paid groups to prevent land possession by recognized ARBs.

Frustrated ARBs – like farmers who received only P10,000 a year or just P833 a month in profit-sharing dividends from the late tycoon Eduardo “Danding” Cojuangco’s estates in Negros Occidental – have also filed petitions to cancel onerous agreements under CARP’s stock distribution option (SDO).

The scheme allows corporate landowners to give farm workers the right to purchase often undervalued capital stock but with no decision-making powers. (READ: Farmers still hungry after 30 years of agrarian reform)

Mariano’s DAR stint was short; the powerful Commission on Appointments rejected his nomination. In that time, he overturned agreements that circumvented CARP through the sale, transfer, or assigning of agrarian reform lands, including joint venture deals.

The Voluntary Land Transfer (VLT) option, where landowners transact directly with beneficiaries, also allowed evasion of coverage through the use of relatives and other dummies in 70% of the agreements, according to a 2017 study by the Philippine Institute for Development Studies (PIDS).

The fallout can be bloody, like the 2018 massacre of nine partificipants in a bungkalan activity in Hacienda Nene, Sagay, Negros Occidental.

The workers, all long-time workers of the plantation, were pressing the DAR to implement its 2007 notice of coverage, but were told the owner had “donated” the land to seven persons, including “the laundry woman, driver, and secretary.” The beneficiaries never farmed the land, which the landowner leased out.

They face great financial woes in capital-intensive sugar farming, especially with the current runaway prices of fertilizer and fuel, principal inputs in the industry.

The DAR has also said the lack of credit access and government support services caused 89% of ARBs nationwide to be delinquent in paying their mortgages. ARBs drowning in debt have allowed private financiers, often also landowners and sugar traders, to grab back the land through illicit lease agreements.

Under the aryendo system, 10,000 sqm can be leased from P15,000 to P20,000 annually in fertile plains to as low as P5,000 in upland areas, according to the Unyon ng Manggagawa sa Agrikultura’s (UMA) 2017 scan of sugar-growing provinces like Negros Occidental and Bukidnon, and the Southern Tagalog and Central Luzon regions.

For Mariano and other activists, free land distribution and a waiver on all unpaid mortgages, is the only way to sustain the gains of agrarian reform.

However, the non-government network Task Force Mapalad said an ARB could earn a P99,616 average yearly net profit per 10,000 sqm (roughly P8,300 a month) “even without government support” if the community is organized, exercises collective management, and breaks dependence on a single crop.

MAKISAMA members plan to set aside a substantial portion of their share to farm vegetables, Bucad said. They would manage their share of the land under a set-up similar to a cooperative, “but with more democratic decision-making.”

When they will finally get their dream, is a question that remains. – Rappler.com