Facebook Twitter Copy URL
Copied
Here's what the Philippines' top two officials plan to do in 2023, and what they 'see' for the future

To welcome 2023 – and to mark their first six months in office – the country’s top two officials collaborated on a New Year vlog posted by no less than President Ferdinand Marcos Jr.

In it, the two – wearing gray hoodies – did what most content creators on YouTube would do: chat about their 2023 resolutions while throwing in “predictions” for the coming years.

Marcos has made it a point to populate his official YouTube channel. The President, following his 2016 electoral defeat and in the run-up to his successful 2022 run, had been consistent in posting vlogs that cover a gamut of topics – from news and current affairs to more personal features on his family, including talk of his father and namesake, the late dictator.

Marcos’ videos on his YouTube page are different from videos released by the Palace under the Office of the President or the Presidential Broadcast Staff-Radio Television Malacañang, the agency tasked with documenting his official activities.

In the New Year vlog, which runs under 5 minutes, the two talk about their 2023 resolutions. For Duterte, who is also education secretary, it’s to “sleep longer.”

Marcos said the same, noting that he needs to “learn to rest (matuto akong magpahinga)” because he was getting sick. During his quick trip to Belgium in December, Marcos developed a cold and had a visibly hoarse voice in his speaking engagements there. The President, who has several family members in politics, also said he hoped to spend “more time with family” in 2023.

Marcos and his wife, First Lady Liza Araneta-Marcos, are parents to three adult sons. Their eldest, Ferdinand Alexander or Sandro, is a neophyte legislator who is senior deputy majority leader in the House and joined his father in the President’s first few trips abroad. Their two younger sons, Joseph Simon and William Vincent, occasionally join the first couple in official Palace functions or sometimes grace events where they themselves are the guests of honor.

Duterte jokingly said she saw a grandchild – a girl – for Marcos in 2023. 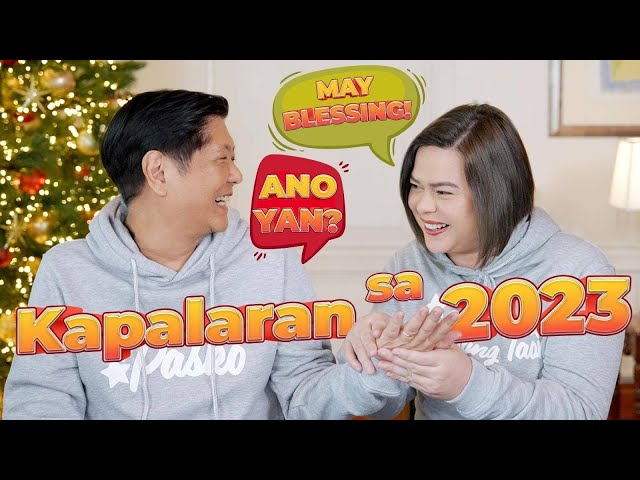 (Hers is the heart of a mother. That’s her motivation for the work she does. So I think Inday Sara will be in public service her entire life.)

The video was released early evening of New Year’s Day, or hours after flights were halted in Philippine airspace due to technical issues. Operations partially resumed the same day, but not before the shutdown had affected tens of thousands of passengers heading to and from Metro Manila.

The last time Duterte appeared on Marcos’ YouTube page, they were the leading presidential and vice presidential candidates, according to surveys.

Marcos and Duterte ran alongside each other in the 2022 polls under the “Uniteam” banner, a supercoalition of sorts as it brought together politicians and clans from the national and local levels. They were the de facto administration candidates despite Marcos not getting the explicit endorsement of the incumbent president then, Duterte’s father. Their tandem won by a landslide.

The two concurrently head departments in government. Duterte is Marcos’ education chief while Marcos is his own agriculture secretary. – Rappler.com