Tricycle driver Ronald Carigo touched the hearts of many when, in under four minutes, he gave what may as well be one of the most eloquent and earnest monologues on why Leni Robredo should become the next Philippine president.

The tricycle driver plying the roads of Cupang, Muntinlupa, recently went viral for his heartfelt endorsement of Robredo. The power of Mang Ronald’s words rested in its simplicity and sincerity.

One would think then that he would have a lot to say when he meets Robredo. After all, the veteran journalist John Nery said the tricycle driver had given a master class in persuasion without even trying.

But when Mang Ronald finally got the chance to see in person his candidate during Muntinlupa’s cityhood anniversary on Tuesday, March 1, he was at a loss for words.

Mang Ronald stood there, clearly starstruck, his left hand frozen in a “Laban” sign. It was a complete contrast to Robredo, who could not hide how excited she was to see him.

Robredo clutched Mang Ronald’s right arm tightly, leaning her head lightly on his shoulder as if to embrace him.

Mang Ronald seemed unable to speak at that moment, but his eyes twinkled with happiness.

It was his daughter instead who ended up talking to the woman gunning to be the most powerful official in the land. 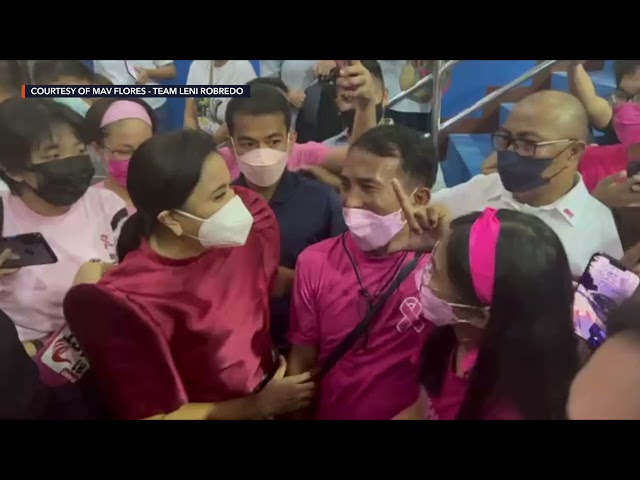 When Robredo left the venue, Mang Ronald cried. His daughter helped wipe the happy tears away.

The Vice President later tweeted that meeting Mang Ronald was the “highlight” of her day.

Robredo, humbled by the support from the tricycle driver, told Ronald, “Maraming salamat sa tiwala mo (Thank you for trusting me).”