BANGKOK, Thailand – In 2021, Thailand’s social media witnessed deep polarization among netizens who supported different types of COVID-19 vaccines. This schism was difficult to bridge because it was so intertwined with the existing political rift, which divided Thais roughly into pro- and anti-establishment citizens.

Our investigation into the dynamics of Facebook conversations on vaccines showed that narratives and lies which discredited the mRNA vaccines while promoting others were prevalent among groups and pages which were seen to be pro-regime. These Facebook posts justified the initial government’s vaccine plan, which was criticized for its over-reliance on non-mRNA vaccines, and buried online opposition to it.

We discovered that those pages and groups amplified messages between one another, and many activities were detected to be inauthentic behaviors which conformed to the “information operation” (IO) carried out by authorities and so-called independent actors to promote the regime and attack the opposition.

The use of information warfare in Thailand is nothing new.

Facebook and Twitter uncovered military-sponsored online IOs from 2020-2021, taking down accounts associated with the Royal Thai Army. The opposition also made similar exposés in their last three parliamentary no-confidence motions from 2020-2021.

According to opposition members of parliament, the military’s IO was systematic in that troops were instructed to create several avatar accounts or pages to mask the identities of the people who created them. The online troops were also given three colors to represent key messages: white to commend the regime, gray to respond to criticism, and black to discredit and attack the opposition.

Despite such systematic efforts, the Stanford Internet Observatory, which studied the Thai military’s IO on Twitter in October 2020, concluded that the military-organized IO “was a low-impact operation,” owing to its receipt of low engagements and its ineffectiveness caused by sloppy works.

“The accounts tended to rely on a few basic tactics, such as replying en masse with supportive messages to tweets from Army PR accounts and dogpiling onto tweets from opposition-aligned accounts. Overall, the accounts were thinly backstopped: many of them had empty bio sections and used stolen profile pictures,” the report said. 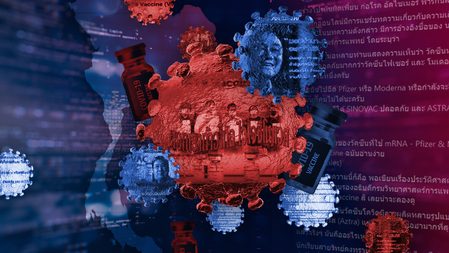 IO and the pandemic

The pandemic in the last three years, however, resurfaced IO and its danger on public discourse and democracy in general. For one, disinformation on vaccines led many Thais to hesitate to receive them.

After vaccine options got more diversified, many Thai netizens began to recall how their parents or elderly relatives had feared or were reluctant to get Pfizer or Moderna vaccines because they believed – without checking – incorrect claims about these vaccines from shared messages on Facebook, Twitter, and Line.

In October 2021, hashtag #ไฟเซอร์นักเรียน (Pfizer for students) trended on Thai Twitter after a number of students expressed their refusal to get Pfizer jabs, citing obtained information from social media. Other students also said their parents did not allow them to receive Pfizer vaccines because they believed the wrong information about Pfizer that was spread on social media.

Apart from this, the other significant dimension to consider is the impact of pro-regime information campaigns about vaccines that were directed towards opponents of the regime.

While pro-regime social media warriors did not have massive following in the period covered, “the activism is impactful and detrimental to the opposition fundamentally because royalist digital repertoires work in tandem with other digital repression tactics of the regime, especially ‘lawfare’ (the abuse of draconian laws against dissidents),” wrote Janjira Sombatpoonsiri, an assistant professor and project leader at the Institute of Asian Studies, Chulalongkorn University.

This “online vigilantism by pro-regime mouthpieces and royalist actors,” according to her, paved the way for “official surveillance and censorship by flagging subversive content and reporting violations to the police.”

“In this sense, draconian laws offer a meaningful activist path for royalist groups who diligently collect evidence and file lawsuits against those they deem disrespectful of the monarchy,” Janjira added. She cited existing laws such as the Computer-Related Crime Act (enacted in 2007 and amended in 2016);  Article 112 of the Criminal Code; and Sections 326 to 333 of the Criminal Code on defamation. These laws have been “abused to stifle anti-establishment supporters with multiple charges.”

What makes online disinformation dangerous, she asserted, is that this was carried out along with state efforts  to censor the public and conduct surveillance.

This tactic was applied at the height of the vaccine debate, such as in the case of Thanathorn Juangroongruangkit, when he – on Facebook live in January 2021 – accused the government of giving exclusive rights to the Crown Property Bureau-owned company to manufacture and distribute COVID-19 vaccines. On social media, pro-regime actors flooded Facebook with condemnations of Thanathorn, with many using the hashtag #สนับสนุน112 (Support Article 112) in their posts.

The Prime Minister’s Office later sued him for Article 112, the world’s strictest lese-majeste law which imposes a maximum penalty of a 15-year imprisonment per charge, and alleged violation of the Computer Crime Act. Earlier this April, the Criminal Court accepted the case filed by the public prosecutor, and Thanathorn was later granted bail.

There’s also the case of anti-government activist Rukchanok Srinok, a member of Power Clubhouse Group, who was charged with violating Article 112 by a royalist Facebook fanpage ‘ศูนย์ช่วยเหลือด้านกฎหมายผู้ถูกล่วงละเมิด bully ทางสังคมออนไลน์ ศชอ.’ (Thailand Help Center for Cyber Bullying Victims – THCVC), for her criticisms of government’s procurement of vaccines that was linked to the monarchy.

The pro-regime information warfare on the vaccine issue reflected the state’s general strategy, which is to label political opponents with such exaggerated terms as “nation-haters” (phuak-chang-chat, in Thai) or “monarchy-overthrowers” (phuak-lom-chao, in Thai), which helped strengthen the justification for launching legal attacks against government critics.

This tactic is similar to what was deployed in the Philippines, where pro-administration information operations tagged opposition activists as “communists’ or ‘terrorists,” resembling the playbook in the Duterte government’s war on drug: demonize drug users or dealers online to justify attacks and extrajudicial killings against them on the ground.

State-backed information warfare has been a growing concern in the Philippines ever since the President Rodrigo Duterte took office in 2016. Troll armies which keep on supporting and protecting the Duterte government, as well as attacking activists, have become a part of the lives of Filipino social media users. At the height of the pandemic , keyboard armies defended the Duterte government’s weak response to the pandemic and harassed its critics, as confirmed by Twitter, which removed hundreds of accounts associated with the operation in April 2020.

Information warfare that took advantage of COVID-19 issues for political gain is not only limited to Thailand and the Philippines. Studies showed that countries like Egypt, the UAE, Saudi Arabia, China, and Russia leveraged on the pandemic to strengthen political control.

Although Facebook and Twitter responded in each country, including Thailand and the Philippines, by taking down fake accounts and those proven to conduct inauthentic behavior, these moves seemed insufficient given the scale of the IO networks in both countries. Their algorithms made way for information warfare to easily manipulate public opinion to advance the political agenda of the state, in the process harming democracy and strengthening the grip of authoritarian states. – Rappler.com

Wongpun Amarinthewa is a Thai journalist and a recipient of the Aries Rufo Journalism Fellowship.