Massacres, incidents of violence against farmers MANILA, Philippines – Farmers are undeniably among the most hard working in the country yet they remain the poorest.

The lack of improvement in the lives of food producers in an agricultural country like the Philippines stems from receiving low wages and not owning the land they till, among others.

Farmers have taken it upon themselves to fight for their rights, resorting to dialogues and strikes to protest unfair labor practices. But there have been several incidents when their cries for help were met with bullets and other threats to their lives.

The recent killing of 9 sucargane workers in Hacienda Nene in Negros Occidental is not the first violent incident against farmers. Here are the others:

At least 21 farmers from Maliwalu, Bacolor, Pampanga were executed on April 7, 1950 allegedly as “revenge” for the death of military captain Nonong Serrano. Serrano was reportedly killed by members of the  Hukbo ng Bayan Laban sa Hapon (Hukbalahap) allegedly from Maliwalu.

Serrano was said to have headed the private army that gave protection to then Pampanga governor Jose Lingad. The politician lost his reelection bid in 1951 due to the massacre.

At least 5 farmers were killed by members of the Philippine Constabulary in Culatingan, Concepcion, Tarlac, according to historian Teodoro Agoncillo in his book History of The Filipino People.

Authorities, however, said that the victims were part of the Hukbalahap and engaged in battle with them. The town vice mayor belied this, claiming that they were “peaceful farmers.”

More than 6,000 farmers on February 1, 1981 protested in Guinayangan, Quezon, calling the government’s attention to land reform, fair prices, and rampant militarization in the province.

What was supposed to be a “peaceful” protest for their rights turned bloody when soldiers, according to witnesses, opened fire at the group – killing two farmers and injuring thousands in the process.

Five farmers were killed while several were injured on December 19, 1981 when members of the Philippine Constabulary (PC) opened fire at a group composed of at least 400 residents in Culasi, Antique.

They were protesting high taxes on agricultural products and abuse of state forces. At least 20 people were killed when government forces fired at a crowd of farmers on September 20, 1985 in Escalante, Negros Occidental. They were protesting the systematic oppression under the late dictator Ferdinand Marcos.

Estimated to include 5,000 sugar workers, farmers, fishermen, and urban poor, the group was fired at by soldiers, policemen, and paramilitary forces when they held their line during dispersal. According to witness accounts, several were instantly killed while those who ran to hide were pursued by armed forces.

A fact-finding commission chaired by then ombudsman Raul Gonzales was organized but was criticized for not holding the landlords and law enforcers to account. The low-ranking policemen jailed were eventually released on parole in 2003. Thirteen people were killed and 39 were injured when government forces fired at a group of 2,000 farmers who trooped to Malacañang on January 22, 1987.

The farmers, who initially spent a week camping outside the Department of Agrarian Reform in Quezon City, wanted to have a dialogue with then-president Corazon Aquino regarding equal land distribution and decent wages.

No one has been held accountable for the deaths of the farmers but families of the victims and human rights groups continue to call for justice 31 years on.

Soldiers killed 17 people, including farmers, on June 23, 1987 in Lupao, Nueva Ecija. According to reports, the massacre of the civilians was in retaliation for the death of a platoon leader killed by the New People’s Army (NPA) the night before.

Witnesses reported 20 soldiers arriving in the village early morning, gathered residents and killed them “with gunfire and bayonets.” The massacre was blamed on the anti-insurgency campaign of the administration of Corazon Aquino.

The soldiers responsible faced the military court but were later acquitted. A clash between government forces and farm workers on November 16, 2004 in Hacienda Luisita led to the death of 7 while injuring at least 120 others.

The violence erupted during a picket by hacienda workers who condemned the earlier retrenchment of farmers. They also called out the flawed distribution option that would have given them stocks instead of the land the farmers needed.

Protesters maintained that the police called in to disperse the crowd started the violence, adding that they directly fired at the group of farmers.

A 2001 report by the National Bureau of Investigation (NBI) concluded that “there were enough reasons to believe” that the government troops “may be responsible” for what happened. (READ: NBI report on Luisita massacre: Protesters more credible than gov’t)

The Military and Law Enforcement Offices under the Office of the Ombudsman dismissed all charges against police and military respondents in 2010. At least 50 people were injured while 3 were killed, including two police, when violence erupted between protesting farmers and government forces in Kidapawan, North Cotabato on April 1, 2016.

The farmers, estimated to reach 3,000, demandde government assistance amid the drought that widely affected their farms. Initiated in March 2016, they called for the release of calamity funds and sacks of rice. (READ: Kidapawan and the rice riots)

But the dispersal after their permit to rally lapsed turned violent – protesters allegedly threw objects at the police while witness accounts said police shot at the group. Many groups questioned the use of guns but the police said there were also active shooters in the crowd. 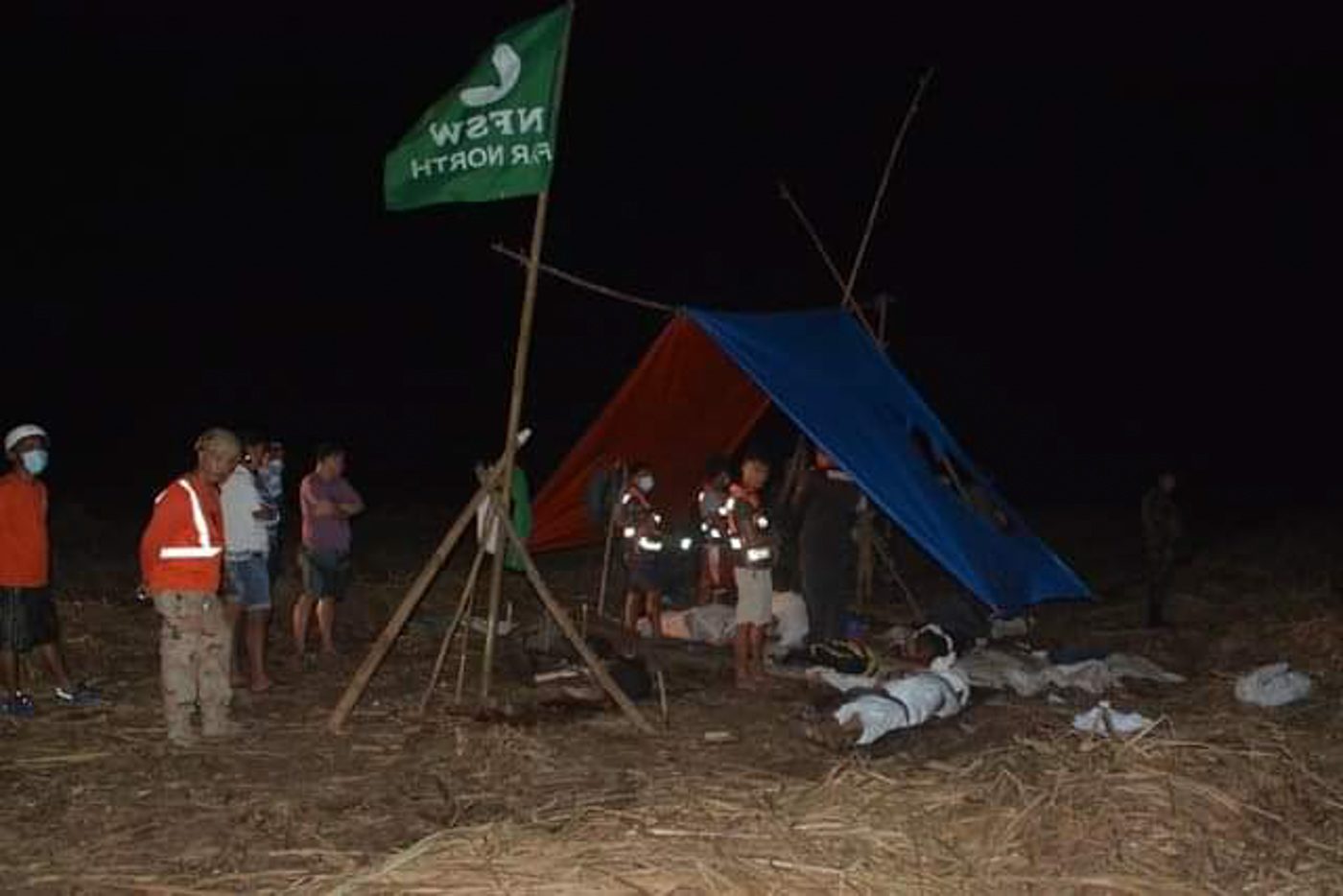 The victims, including 4 women and two minors, were resting in their makeshift shelter when at least 40 men reportedly fired at them.

The Philippine National Police (PNP) is investigating the case, adding that they are looking at a land dispute as the primary motive for the killing of the members of National Federation of Sugar Workers (NFSW).

Negros Occidental Governor Alfredo Marañon Jr has announced a P500,000-reward for any information on the suspects while Malacañang has called the killings a “dastardly act.” – Rappler.com