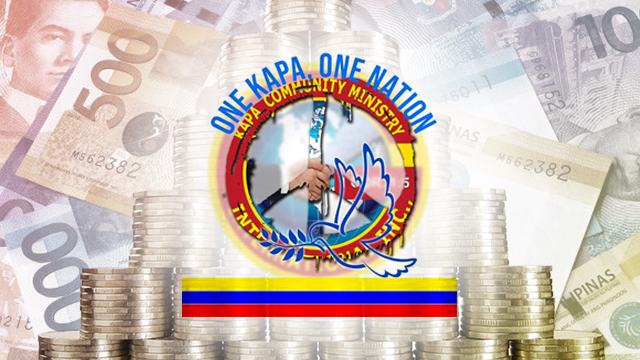 MANILA, Philippines – Kapa Community Ministry International (Kapa) claims it has helped millions of Filipinos grow their money. It promised Filipinos that after a one-time donation, they will be receiving 30% of the amount for life.

Securities and Exchange Commission (SEC) Chairman Emilio Aquino called it an outright scam, saying it was “mathematically impossible” for any company to offer such.

Despite the red flags, its investors supported Kapa and called the government “anti-poor” for ordering the shutdown of the supposed religious organization.

Pastor Joel Apolinario, the organization’s leader, claims they have as many as 5 million investors, making it one of the largest scams in Philippine history.

The SEC said none have come forward to complain, but they have witnesses to help them for the case build-up.

Apolinario is based in Bislig City, Surigao del Sur and started the organization there in 2015. Since then, it had branched out to most of the regions.

To be a member of Kapa, investors fill out a small form and donate at least P10,000 up to at most P2 million.

The contract states that the donation shall be used to achieve Kapa’s mission for the “propagation of the religious faith, establishment of livelihood programs for the benefits of its members.”

According to the Civil Code of the Philippines, a donation is a voluntary transfer of possession without any consideration and is considered a gift.

Compared to typical investments, mutual funds grow between 5% to a little over 9%. Government securities like T-bills and T-bonds yield at most over 6%.

The SEC said that the investment-taking activity of Kapa constituted a Ponzi scheme, an investment program that offers impossibly high returns and pays investors out of the capital contributed by later investors.

Aquino said the investment scheme is simply unsustainable. To illustrate, Kapa will need P15 billion a month to pay 5 million members, who have contributed at least P10,000 each.

Early members defend Kapa and attest that they have earned cash. The problem, however, is that the money they earned came from other people.

Without recruiting new members or soliciting more investments from the public, the pooled funds will not last beyond 3 months. 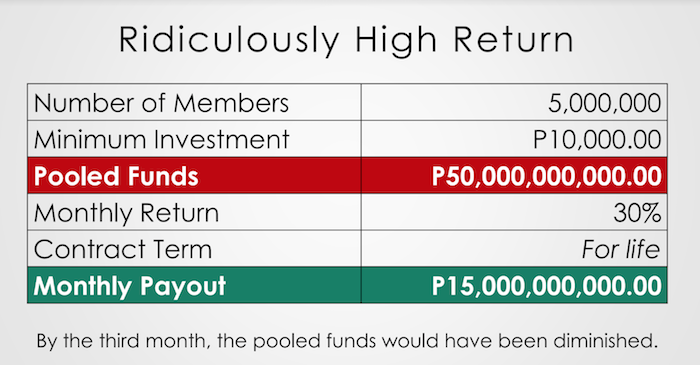 Apolinario claims that Kapa has been operating for 6 years now and boasts of a diverse portfolio of businesses to sustain its promises to investors.

However, the SEC said that majority of the businesses are newly registered sole proprietorships. Moreover, some corporations which are allegedly acquired by Kapa do not have financial capabilities to generate the necessary funds to sustain the high returns.

“These are basically startups because these companies are new and there is no way it could have generated billions. And if they really did, the country’s top corporations could not even earn that big,” Aquino said. 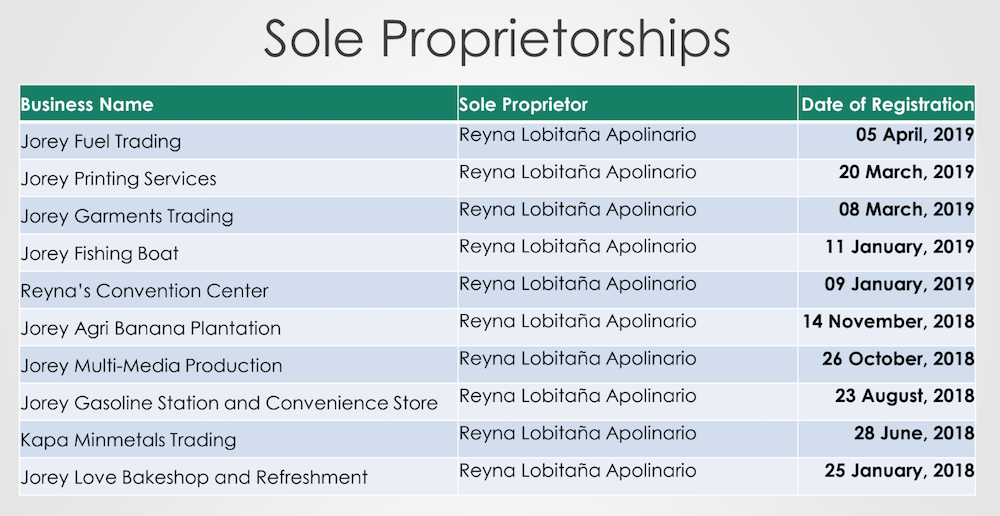 Kapa needs at least P15 billion a month to pay its supposed 5 million members who have contributed at least P10,000.

Some of the supposed Kapa-owned companies reported revenues nowhere near the needed amount to pay out investors.

The revenues of Aces Tagum College in 2018 stood at P24.3 million, while its expenses were at P23.3 million, which means it earned just P1 million that year.

The SEC also found that Kapa was venturing into gold processing. Aquino said this may indicate that Kapa is using investors’ money to finance the startup.

Aquino also disclosed that they found that Apolinario and his wife Reyna acquired 9 luxury vehicles between 2018 to 2019.

How did it grow?

Kapa’s official numbers clearly show that it is not capable of fulfilling its promises. But why did people still fall for it? How did it grow to be one of the biggest investment scams in Philippine history? (READ: Timeline: The Aman Futures pyramid scam)

He said disinformation spread quicker this time around due to social media.

But as with many Ponzi schemes in history, all of them are bound to fall.

As early as 2017, the SEC already issued an advisory against Kapa. It was only in February 2019 that the commission issued a cease and desist order, and eventually a revocation order in April.

In June 4, the Court of Appeals issued a freeze order on Kapa’s assets.

The National Bureau of Investigation already conducted simultaneous raids on some of Kapa’s headquarters in the regions.

Aquino admitted that Filipinos need more lessons on financial literacy to put an end to scams. He also said enforcement agencies need to be educated as well, as there have been reports that some policemen invested in Kapa.

With soaring prices of goods and wide inequality between the rich and the poor, it is no surprise that Filipinos desire a little more comfort and fast cash.

Can government and the private sector take advantage of the high risk appetite of some Filipinos and lead them toward legitimate investments? – Rappler.com