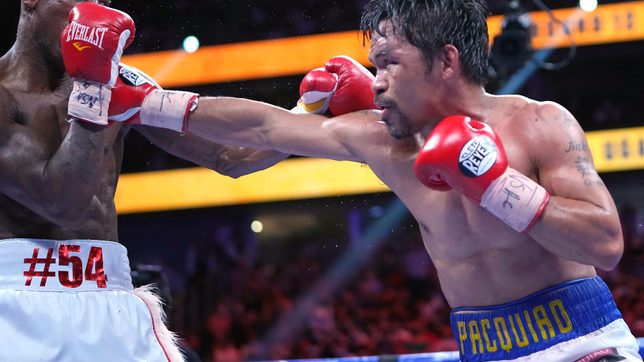 Facebook Twitter Copy URL
Copied
(1st UPDATE) Fighting for the first time in more than two years, Manny Pacquiao could not solve the puzzle Yordenis Ugas posed in their bout for the WBA super welterweight belt

It seems like Father Time has finally caught up with Manny Pacquiao.

Fighting for the first time in more than two years, the Filipino icon could not solve the puzzle the Cuban posed as Ugas earned the nod of the judges, 115-113, 116-112, 116-112. (HIGHLIGHTS: Manny Pacquiao vs Yordenis Ugas fight)

A replacement foe for unified welterweight champion Errol Spence Jr, Ugas proved his mettle as he executed his fight plan to a tee to take down the only eight-division world champion of the sport.

Pacquiao had trouble finding an opening against the defensive-minded Ugas, who scored most of his points off continuous jabs and heavy right overhand punches to the head.

Although Pacquiao ended up as the busier fighter with 815 thrown punches – more than double Ugas’ output – he landed only 130 for a measly 16% rate, according to Compubox.

Meanwhile, Ugas landed 151 for a respectable 37% and dominated in the power punches category with a scintillating 59%, with 101 of his 171 power shots thrown connecting.

Seven years younger than the 42-year-old Pacquiao, the Cuban also looked more energized in the latter rounds as the Filipino eventually slowed down.

Pacquiao later bared he felt tightness on his legs.

“I’m sorry we lost tonight. I did my best. I apologize,” said Pacquiao.

Ugas, who raised his record to 27-4 and stretched his win streak to four fights, is now setting his sights on a unification bout against Spence, who holds the World Boxing Council and International Boxing Federation belts.

Spence is currently recovering from an eye injury, which prompted him to pull out of his blockbuster bout against Pacquiao.

“He is the next one on the list. I want to fight him. But most of all, I’m praying that he recuperates,” Ugas said through a translator.

Pacquiao, on the other hand, asked for patience from his fans regarding his decision whether he will continue fighting after hinting at retirement prior to the Ugas clash.

The boxing legend suffered his first loss since July 2017 as he saw his win-loss-draw record drop to 62-8-2.

“Let me rest first and relax and make a decision if I will continue to fight or not,” Pacquiao said. – Rappler.com