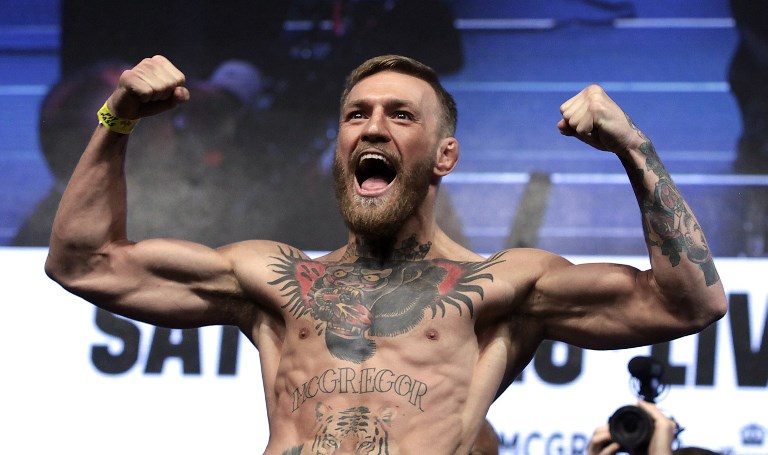 (FILES) In this file photo taken on August 25, 2017 MMA figher Connor Mcgregor poses during a weigh-in in Las Vegas, Nevada. - Mixed martial star Conor McGregor said on March 25, 2019 he had retired from the sport, vowing to hang up his gloves for the second time in three years. (Photo by John GURZINSKI / AFP)

“Tinatanggap ko,” McGregor tweeted on Saturday, August 1, raising speculations that he has accepted an offer to fight Pacquiao.

McGregor intrigued fans about his next move by tweeting “I accept!” a day before, although he did not elaborate on his future plans.

But the Tagalog tweet gave context to his earlier post since there have been talks of McGregor once again testing the boxing waters to face Pacquiao.

The Irishman fought undefeated American boxer Floyd Mayweather Jr in his first and only boxing match, succumbing in 10 rounds via a technical knockout in 2017.

McGregor, though, has been retired since June after last seeing action in the UFC in January, when he hammered out a first-round technical knockout win over Donald Cerrone.

Pacquiao, meanwhile, is being eyed to face either Terence Crawford, Errol Spence Jr, or Mikey Garcia before the year ends as he dangles his World Boxing Association welterweight belt. – Rappler.com