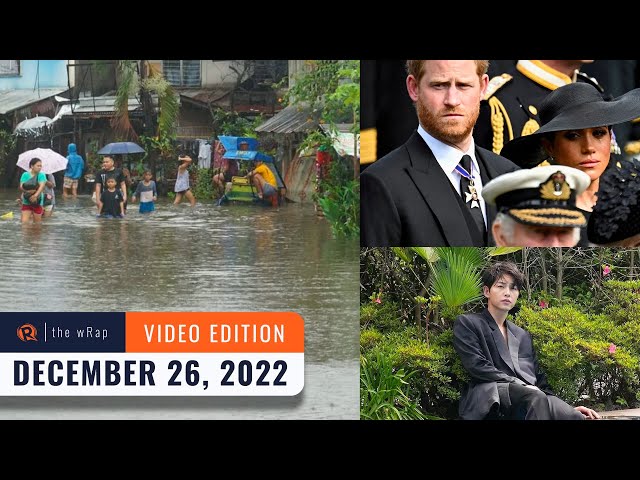 Thousands spend Christmas in Mindanao evacuation centers. At least two people died in a landslide in Oroquieta City in Misamis Occidental on Christmas Eve, December 24, when the rain started pouring.

No brownouts, but expect higher power rates during 2-week Malampaya shutdown. The Department of Energy urges the public to conserve energy as the Malampaya natural gas facility will undergo maintenance shutdown in February 2023.

Beijing, Shanghai residents back to work as China eases into living with COVID-19. After years of ruthless anti-coronavirus curbs, China President Xi Jinping scraps the country’s zero-COVID policy in the face of protests and a widening outbreak.

UK’s Sunak criticized for asking homeless man if he ‘works in business’. British Prime Minister Rishi Sunak faces criticism for his seemingly out of touch remarks when he asked a homeless man at a charity whether he “worked in business” and wanted to get into the finance industry.

Harry and Meghan dismiss Sun apology for offending column as ‘PR stunt.’ Britain’s Prince Harry and his wife Meghan on Saturday, December 24, dismissed an apology by the tabloid Sun newspaper for publishing a column highly critical of Meghan as a “PR stunt” and said the newspaper had not contacted her to say sorry.