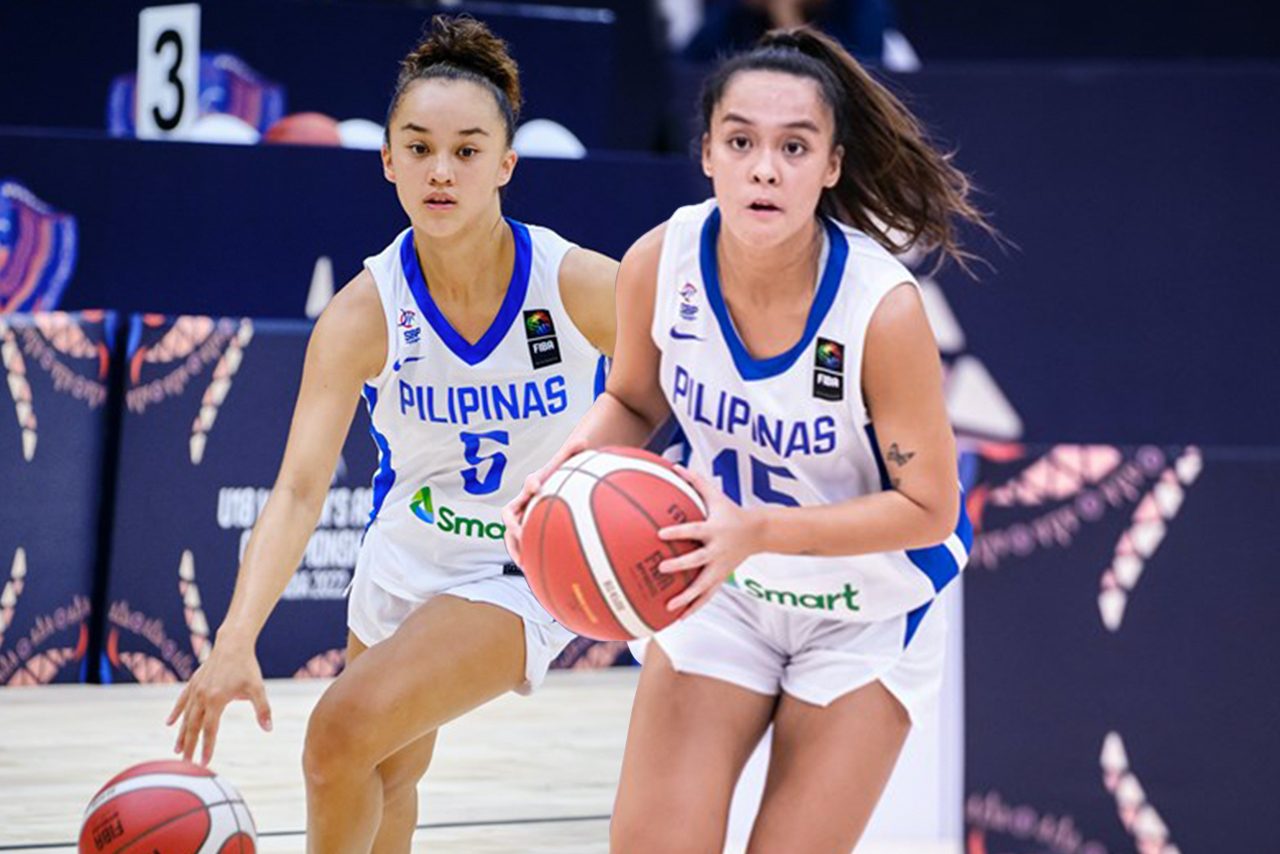 REPRESENT. Louna Ozar (left) and Ashley Loon prove their worth for Gilas Girls.

MANILA, Philippines – A pair of 18-year-old girls traveled cross-continent to the Philippines to play ball for the national team.

Both of them grew up in Western countries.

One of them is an incoming freshman varsity player for Rochestor University in the United States.

The other is a guard for the under-20 squad of the ESB Villeneuve-d’Ascq Lille Metropole, whose senior team plays in the Ligue Feminine de Basketball, the top flight women’s league in France.

Both trace their roots to Mindanao.

Ashley Loon and Louna Ozar were both vital pieces for the Gilas Girls who recently placed third in Division B of the FIBA Asia Women’s Under-18 Championship held early September in Bengalaru, India.

Gunning for the championship to gain promotion to Division A, the Philippines swept its group but saw its bid crushed following a heartbreaking one-point loss to Malaysia in the semifinals.

The Filipinas salvaged bronze by defeating Samoa in the third-place match.

Ozar and Loon were two of the most consistent performers for Gilas Girls.

Loon was the team’s top rebounder, collaring 6.4 boards per outing. She had a slow start to the tournament, but ended strong by scoring in double figures in her last three games.

In their last game in the group stage, she almost posted a triple-double with 14 points, 8 rebounds, and 8 assists. She was at her best in the crossover semifinals when she registered a double-double of 17 points built on 5 triples and 10 rebounds. She averaged 9.6 points.

Ozar was the team’s defensive anchor and utility player. Since the team lacked size, Ozar often had to play out of position, sometimes called upon by national team coach Pat Aquino to play the four or even the five spot.

Ozar topped the team in efficiency and averaged 11.4 points, 5.2 rebounds, and 3 steals. She was particularly clutch against Samoa in the group stage when she scored 6 of the team’s 8 points in the end game to quash their opponent’s rally. She topped the team in scoring in the game against Maldives with 22 points.

There are those who believe the outcome of the semis game against Malaysia would have been different if Ozar did not go down with an injury which forced her to miss the second half.

Loon was born in Basilan and studied at Claret in Zamboanga City before her family moved to the States when she was eight years old.

She was named Most Valuable Player while playing for Berkley High School. She led her squad to their first district championship and became the first player in school history to break the 1,000-point mark. She graduated from Berkley with high academic honors.

It was from her high school and AAU basketball exploits that her father, Chris Intig Loon, gathered video highlights to send to the Gilas Women’s social media page. Shortly thereafter, Chris was contacted by Aquino, who expressed interest in recruiting Ashley for the Gilas program.

It was a chance of a lifetime that Loon and her family made sure not to pass up.

“It’s really knowing that I am not only playing for myself but for my country, that I am representing the Philippines which is a huge thing,” said Loon.

Loon also relishes the friendships she forged with girls her age, who like her, love the game of basketball and dreamt of becoming part of the national team.

“I was close with most of the players but the people I was always with were Kalynne Mendez, Sumayah Sugapong, and Sydney Heyn,” he said. “My teammates and I would have sleepovers and we would just laugh all night and talk about the most random things. I think the bond we had was what made our team special.”

The youngest of three children of Camiguin native Leo and French national Anne, Ozar was selected to play for the France national team in the FIBA Under-16 Women’s European Championship in Portugal in 2020. The event, however, was canceled due to the pandemic. It was also around the same time that Louna was able to secure her Philippine passport.

“I chose to play for the Philippines because my Filipina side is my greatest pride. For me, it is an honor to be able to play for Gilas,” Ozar said.

Ozar had long been on the radar of Aquino after posts of her exploits in the social media page Midlife Halftime gained traction online. After Ozar obtained her Philippine passport, Aquino wanted her to make her debut for Gilas in the 2020 FIBA 3×3 U18 World Cup in Hungary. But again, the pandemic prevented Gilas from participating.

From her first initial experience playing for the Philippines, Ozar has learned to adapt and overcome challenges.

“Even if we do not have tall players, we were able to prove that we are fighters and that we can win,” she said.

“When it is time for the national anthem, it is a moment that brings so much emotions to me because of the realization that we are representing the Philippines and we are wearing the country’s jersey,” shared Ozar.

Loon and Ozar, along with the likes of Sumayah, Sydney, Kristan Geyl Yumul, Camille Nolasco, Gabby Ramos, and Kate Bobadilla, among others, are names that will become fixtures in the Gilas rosters in the years to come.

They will be the future Allana Lim, Gemma Miranda, Jack Animam, Afril Bernardino, and Janine Pontejos – names who have come to define the Philippine women’s national team program.

Ozar and Loon will be among the next generation who will make sure that Gilas Women will remain competitive and will conquer greater heights in the years to come. – Rappler.com