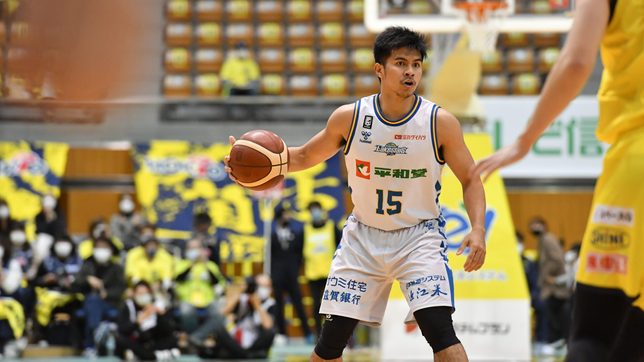 TOUGH STRETCH. Kiefer Ravena and the Shiga Lakestars still can’t snap out of the funk.

MANILA, Philippines – Kiefer Ravena and the Shiga Lakestars failed to put an end to their long and painful losing streak as they fell to the Sunrockers Shibuya, 102-75, in the Japan B. League on Sunday, December 5 at the Aoyama Gakuin Memorial Hall.

Ravena finished with just 4 points on a dismal 1-of-8 shooting, 3 assists, and 2 steals in the 27-point blowout as the Lakestars dropped their seventh straight outing and moved down to 6-9 in the standings.

Coming off Division 1’s three-week break, the Sunrockers hardly looked like they missed a beat as they quickly built a double-digit cushion, 28-16, at the end of the opening period.

It was all Sunrockers from there on as they even managed to extend their advantage to as many as 31 points, 72-41, which proved too much for the struggling Lakestars to overcome late in the second half.

Two-time NBA champion James McAdoo led the way for the Sunrockers with 25 points and 10 rebounds, while Leo Vendrame, Koyo Takahashi, and You Nishino added 12 markers apiece.

Ovie Soko topscored for the Lakestars with 24 points, while Teppei Kashiwagura and Sean O’mara chipped in 14 and 12 points, respectively.

Ravena and the Lakestars will look to finally snap out of their losing skid when they collide once again with the Sunrockers on Monday, December 6 at 6:05 pm, Manila time.

Just like his brother’s Shiga Lakestars, Thirdy Ravena’s San-En NeoPhoenix still couldn’t put an end to their lengthy losing streak as they dropped to the Seahorses Mikawa, 98-73, at the Toyohashi City Gymnasium.

With Ravena serving the second of his two-game suspension following a postgame outburst last November 14, the undermanned NeoPhoenix had no answers for the red-hot Seahorses, who even led by as many as 30 points, 94-64, with 5:32 to go in the final frame.

Seven players scored in double-figures for the Seahorses, but it was Masahi Hosoya who led the way with 17 points.

Justin Knox finished with 19 points and 10 rebounds, while Shota Tsuyama and Yoshiyuki Matsuwaki contributed 18 and 16 markers respectively for the NeoPhoenix, who slipped further down the standings with a 3-13 record.

Ravena will be back in action for the NeoPhoenix on Saturday, December 11, when they take on the defending champion Chiba Jets at 4:05 pm, Manila time. – Rappler.com