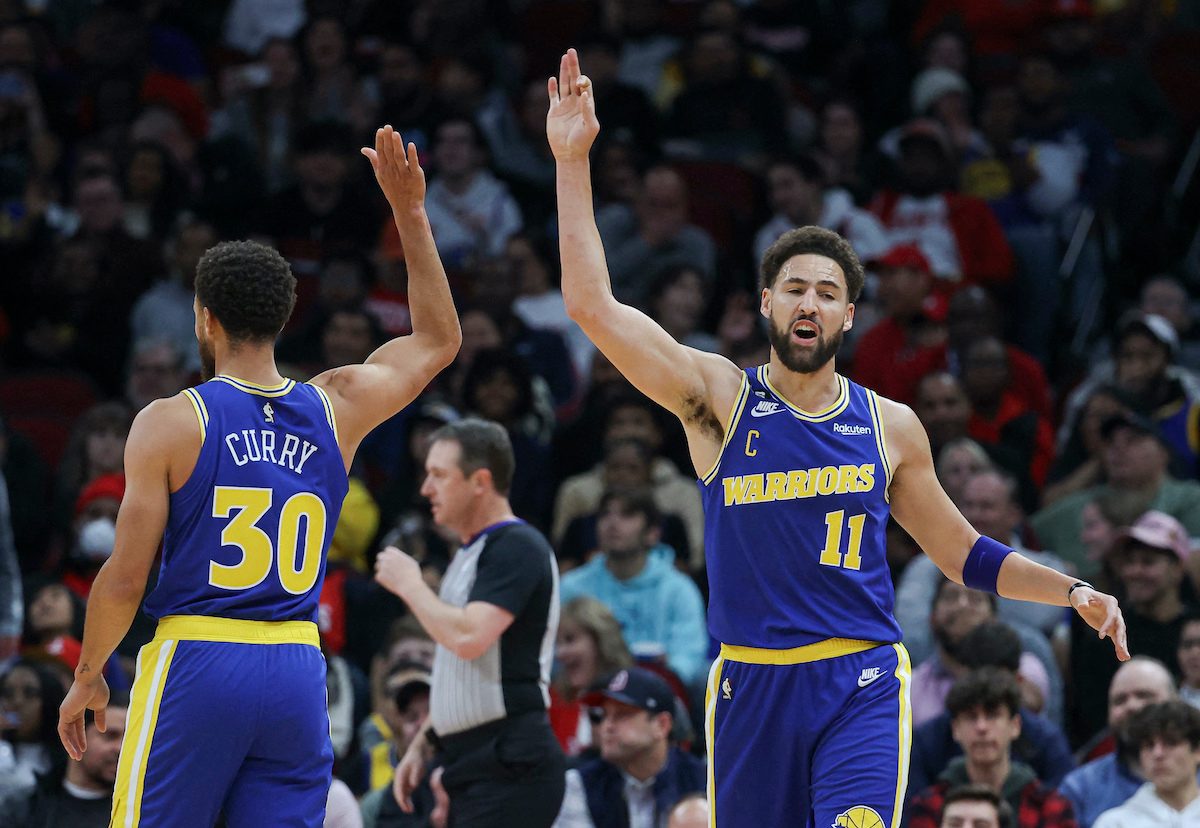 SPLASH BROTHERS. Klay Thompson and Steph Curry connive as the Warriors finally win on the road.

Facebook Twitter Copy URL
Copied
The Warriors improve to 1-8 on the road behind a timely explosion from Klay Thompson, who nets a season-high in points

Klay Thompson scored a season-high 41 points, Stephen Curry posted a season-best 15 assists, and the Golden State Warriors recorded their first road victory of the season with a hard-fought 127-120 decision over the Houston Rockets on Sunday, November 20 (Monday, November 21, Manila time).

After blowing a 20-point first-quarter lead, the Warriors had to battle tooth and nail to ward off the Rockets.

Curry and Thompson were up to the task, teaming for a three-pointer prior to the close to the third quarter that provided the Warriors a 97-94 lead entering the final period. In the fourth, Thompson drilled 3 three-pointers including, one with 66 seconds left that answered a pair of free throws by Rockets rookie Jabari Smith Jr. and extended the Warriors to a 123-117 lead.

Curry assisted on the Thompson three-pointer to close the third and the three-pointer that pushed the lead to 6. He followed with a three-pointer with 34.2 seconds left that levied the knockout blow. Curry added 33 points and 7 rebounds. He and Thompson were a combined 17-of-27 from deep.

The Rockets gave a spirited effort, led by Kevin Porter Jr. (30 points and 6 assists) and Smith, who scored a career-high 22 points and grabbed 7 rebounds. Fellow rookie Tari Eason added a career-high 19 points with 8 rebounds and 3 steals. KJ Martin scored 12 off the bench.

It was a scorching start for the Warriors and Thompson in particular. Golden State led by as many as 18 points in the first quarter behind Thompson, who hit his first 6 shots before missing a three. Thompson was up to 18 points at that juncture and had 20 of the Warriors’ 40 points in the period as Golden State shot 69.6% while making 6 of 9 shots from behind the arc.

However, Houston whittled that 18-point deficit to 40-28 entering the second and went on an extended 18-2 run behind its bench, most notably Martin and Eason. Martin capped the surge with a dunk at the 9:25 mark that listed the Rockets to a 41-40 lead, and Houston extended that margin to 61-52 on a pair of Green free throws to complete the 29-point, first-half turnaround.

Curry responded with a three-pointer, an assist on a Thompson three-pointer, and a pair of free throws as the Warriors shaved the deficit to 65-61 at the break. Eason, Martin and Smith totaled 35 points in the half. – Rappler.com