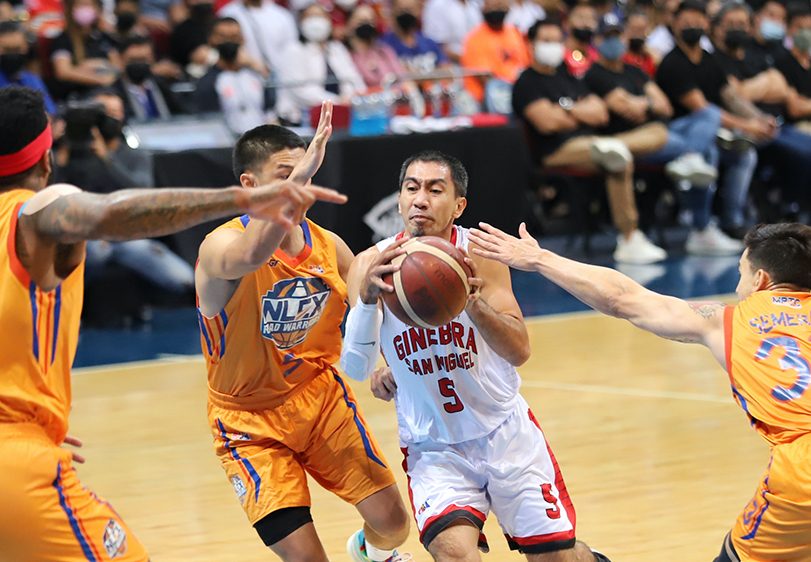 MY BAD. LA Tenorio owns up to his mistakes as Ginebra misses out on an immediate entry to the finals.

MANILA, Philippines – Barangay Ginebra counts on LA Tenorio to deliver down the stretch during close games.

But the usually calm and collected Tenorio was nowhere to be found in the endgame as Ginebra fell short of a sweep of NLEX in their PBA Governors’ Cup semifinals after a heartbreaking 85-86 loss on Sunday, March 27.

It was a rough ending for the veteran guard after he saw his pass intended for Justin Brownlee stolen by Road Warriors import Cameron Clark, who broke an 83-83 deadlock with a three-point play with seven ticks left.

With no timeouts remaining, Tenorio then went coast-to-coast for an easy layup only to realize that he needed a triple to force overtime, allowing NLEX to cut its series deficit in the best-of-five affair to 1-2.

“I was not aware,” Tenorio said in a mix of Filipino and English. “I got disoriented by my turnover before that play, so I was not able to look at the scoreboard.”

“That was very unusual for me to do that, especially in those kinds of situations.”

Tenorio has been one of the Gin Kings’ best players in the semifinals, averaging 14.7 points, 7.3 assists, and 3.7 rebounds.

Even in Game 3, the 37-year-old star still put up a near double-double of 10 points and 9 assists on top of 4 rebounds and 2 steals.

His string of impressive games, though, are not enough consolation as Tenorio confessed it will be difficult for him to forget his costly blunders.

“I’m going to admit that it is not going to be easy for me to let this incident go. But as one of the vets in the team, I cannot deal with this. I have to battle,” Tenorio said.

To be fair to Tenorio, his late-game mistakes were not the only reason Ginebra failed to close out the series.

As a start, the Gin Kings shot below 50% from the free throw line, making only 13 of their 27 foul shots.

But Tenorio acknowledged that the game will be remembered for his untimely errors as he took responsibility for the loss, their first in the playoffs after four straight wins.

“I told the guys, it is really on me. This game is on me,” Tenorio said. “As one of the vets, I really have to admit my mistakes.”

“Although we had a lot of things all throughout the game that should not have happened, at the end of the day, it will come down to the last possession. You’re not going to look at the whole game.”

Fortunately for Tenorio, Ginebra remains ahead in the series and will have a chance to finally dispatch NLEX in Game 4 on Wednesday, March 30.

“We’ll bounce back. We’ll figure it out.” – Rappler.com