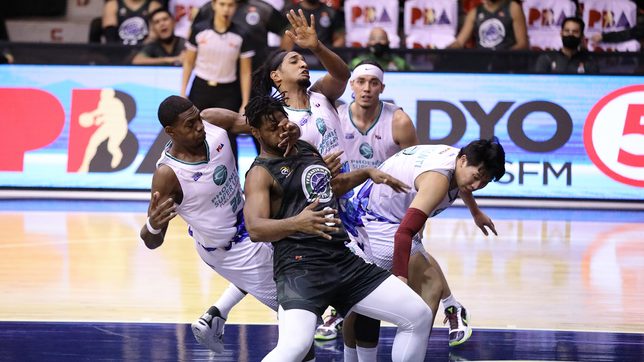 MANILA, Philippines – The Phoenix Fuel Masters found their fire late as they outgunned the Terrafirma Dyip in a stunning 103-100 comeback win to start their 2021 PBA Governors’ Cup run on Thursday, December 9, at the Ynares Sports Arena in Pasig.

Phoenix star guard Matthew Wright bucked an ice-cold start and dropped 13 of his 17 points in the fourth quarter alone, capped by a triple at the 4:16 mark for the 91-all tie off a 14-1 run.

Although new Dyip guard Alex Cabagnot sank a crucial layup with 7 ticks left to get within two, 100-102, the breaks of the game ultimately fell Phoenix’s way as they held on to the win even after missing three of their last four attempts from the line.

Jason Perkins and Chris Banchero topscored for the Phoenix locals with 18 points apiece, while import Paul Harris churned out a 24-marker, 15-rebound double-double on 8-of-15 shooting.

“Just keep playing, take our chances. And I guess we just went down to our defense, and our defense really helped our offense.”

Import Antonio Hester led all scorers with 28 points and 16 rebounds on a stellar 11-of-14 clip in the heartbreaking loss, while Tiongson added 20 markers on 7-of-13 shooting.

In his first game with Terrafirma after seven successful years with the San Miguel Beermen, the 39-year-old Cabagnot chipped in 10 points, 7 rebounds, and 5 assists, albeit with 7 turnovers on a cold 4-of-17 clip.

Phoenix will try to keep up its winning ways as it faces the Blackwater Bossing on Saturday, December 11, 4 pm, while Terrafirma aims for a quick turnaround at 6:45 pm against the Rain or Shine Elasto Painters.