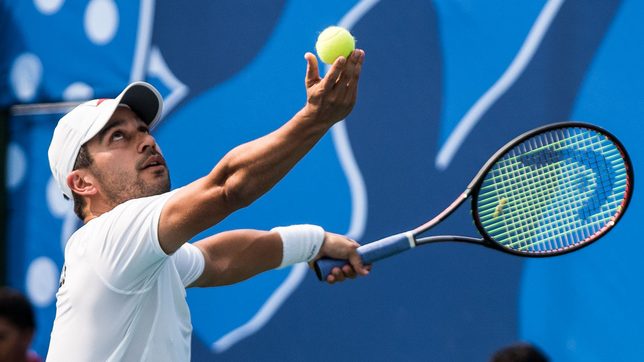 DERAILED. Treat Huey and other Filipino tennis stars express their desire to get back to competing in their respective ITF circuits.

A year after Philippine tennis impressed with a 1-2 finish in the 2019 Southeast Asian (SEA) Games men’s doubles tournament, the Philippine Tennis Association (PHILTA) failed its athletes as it was slapped with a two-year suspension by the International Tennis Federation (ITF).

A suspension from the world governing body of tennis would mean that Filipino tennis players would be barred from representing the country in ITF official team competitions like the Davis Cup.

As netters all over the world still continue to try to find their footing due to the COVID-19 pandemic, the Filipino players are not exempted from the widespread struggle.

“If my fellow players are barred from the Davis Cup and other international team competitions, it would be a huge blow to our livelihood in an already trying time,” said 2019 SEA Games silver medalist Treat Huey, who teamed up with Ruben Gonzales in the SEA Games men’s doubles event.

“The athletes should not suffer because of the shortcomings of PHILTA which we have no control over and are not even made aware of. ”

Huey has been trying his best to climb the world rankings as he teamed up with American Nathaniel Lammons to bag the doubles title of the Association of Tennis Professionals (ATP) Challenger Tour 2020 Split Open last October.

The national team mainstay, though, missed out a chance to participate in the country’s Davis Cup campaign against world No. 6 Stefanos Tsitsipas’ Greece last March.

The country’s tennis association was mainly suspended from the ITF due to unresolved leadership and governance issues.

Despite the ITF’s previous requests to hold a proper election under the POC rules, the international federation was giving PHILTA another chance to follow protocol in order to lift the ban.

Failure to comply with the request for the last time could lead to the expulsion of PHILTA.

“I really hope that there will be positive changes moving forward, starting off with the holding of an election. My ultimate hope is to have a unified and a more efficiently-run organization that will ensure that all the tennis players in the country will be properly taken care of,” added Huey.

“I just want to have the chance to be able to get back to competing again, after a crazy 2020.” – Rappler.com