FINALLY. Hidilyn Diaz crowns herself a world champion at last.

Facebook Twitter Copy URL
Copied
Hidilyn Diaz, the Philippines' first-ever Olympic champion, proves to be a cut above the rest as she defends her weightlifting crown in the women's 55kg 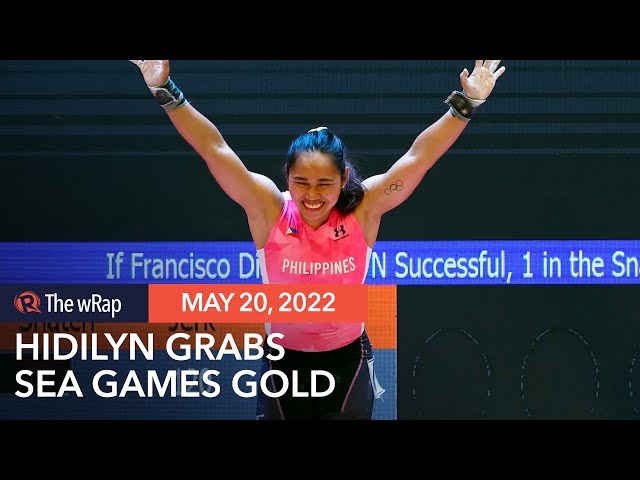 MANILA, Philippines – Weightlifting star Hidilyn Diaz took care of business in the Southeast Asian Games in Vietnam and provided the Philippines’ campaign with a golden boost.

The Philippines’ first-ever Olympic champion, Diaz proved to be a cut above the rest as she defended her crown in the women’s 55kg at the Hanoi Sports Training and Competition Centre on Friday, May 20.

Diaz withstood a gutsy challenge from fellow Olympic gold winner Sanikun Tanasan of Thailand, who held a slim lead after the snatch portion.

Tanasan – the 2016 Olympics women’s -48kg titlist – set a SEA Games record in snatch with a lift of 93kg, a one-kilogram edge over Diaz.

But Diaz separated herself from the pack with a 114kg lift on her first attempt in the clean and jerk to finish with a total lift of 206kg for her second straight SEA Games gold.

Indonesia’s Natasya Beteyob picked up a bronze after lifting 84kg in snatch and 104kg in clean and jerk for a 188kg total.

Diaz’s golden lift came at the right time to prop up the Philippines’ SEA Games bid, with the country dropping from third to fifth place in the medal table after its gold production slowed down over the past two days.

It is the Philippines’ 42nd gold in Vietnam as the country tries to narrow the gap against Singapore and Indonesia for the No. 3 spot. – Rappler.com