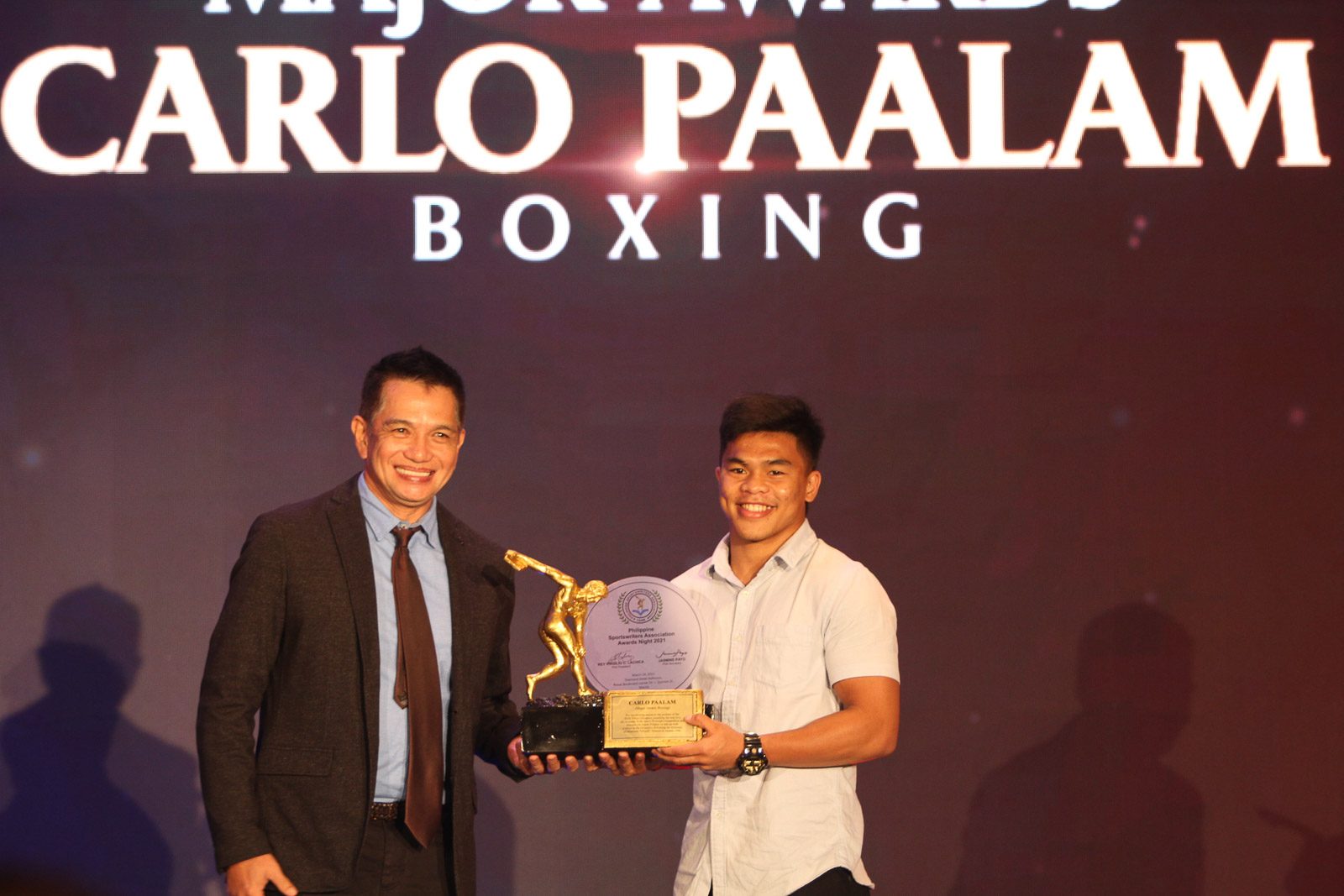 Boxers Carlo Paalam, Nesthy Petecio and Jerwin Ancajas receive recognition from Philippine Sportswriters Association (SMC-PSA) for their achievements in 2021, during the awards ceremony at the Diamond Hotel in Manila on March 14, 2022. Rappler

Facebook Twitter Copy URL
Copied
Coming off a well-deserved break from an Olympic silver medal finish, 23-year-old Carlo Paalam takes on a new challenge by moving up to bantanweight at the 2022 SEA Games in Hanoi, Vietnam

MANILA, Philippines – Carlo Paalam is making his in-ring return at the 2022 Southeast Asian (SEA) Games, and this time, he is battling with renewed confidence after his historic Tokyo Olympics stint where he won the country’s third boxing silver medal.

Speaking at the 2021 Philippine Sportswriters Association (PSA) Awards on Monday, March 14, the 23-year-old also revealed that he is taking on a additional challenge at the Hanoi, Vietnam games by moving up to bantamweight, or the 54-kilogram category.

“I can’t say I can win [the gold] because all of us are experienced, but I will do my best at the games,” said the soft-spoken boxing star in Filipino. “My confidence is already there because I’m an Olympian, but we can’t be too confident because it’s back to zero for us. We really need to work hard to succeed, and so we can protect our record.”

Paalam found success in the Olympics at the flyweight division, or the 51-kilogram category, where he downed 2016 Rio gold medalist Shakhobidin Zoirov in a stunning upset to assure himself of at least a bronze medal finish.

This was also a step up from the light flyweight class (49 kg) he competed in at the 2019 SEA Games, where he made hometown fans proud by winning his first career gold.

Paalam, though, took a well-deserved break after the Olympics, and has not yet started full-blown preparations for the Hanoi SEA Games.

In his down time, he said that he invested in his career earnings – putting up retail stores, and buildings for lease.

“The Olympics changed my life and my family’s. I really got myself into businesses because these opportunities don’t come very often in our lives,” he said. Before going back to work to represent the country again, Paalam just savored his time at the PSA Awards night held at the Diamond Hotel in Manila with his fellow Olympians Irish Magno and fellow silver medalist Nesthy Petecio.

Bronze medalist Eumir Marcial was also honored at the event, but was instead represented by his wife.

“I feel really happy because we Olympians are all together again,” Paalam said. “Eumir is not here, but he’s still with us in spirit because we’re one boxing team.” – Rappler.com