The Lady Bulldogs nabbed their 101st consecutive win in the UAAP women’s basketball tournament, downing Adamson University, 100-66, at the Mall of Asia Arena on Saturday, October 15.

“Tin Cayabyab I’ve been missing her for four games already. Good thing she had a good start and her teammates turned to her for confidence,” said NU coach Aris Dimaunahan.

NU asserted its dominance right from the opening frame, cruising to an 18-point lead, 31-13, and never looked back.

Karl Ann Pingol had 19 points as well in the victory with 9 rebounds, while Angel Surada was a perfect 5-of-5 from the field to end with 12 points and 10 rebounds.

Camille Clarin and Princess Fabruada had 10 points apiece as well, both grabbing 3 steals in the process.

NU zoomed to 5-0 while halting the Lady Falcons’ two-game winning streak to pull them down to 2-3, still at fifth.

Lady Falcon Dindy Medina erupted for 28 points on 9-of-17 shooting but her efforts went for naught, while Victoria Adeshina had her best game with 14 points and 12 rebounds.

“It’s always hard to play against a Dindy Medina. We played against her in 3×3, and her scoring prowess is really something else,” said Dimaunahan.

Up next for the Lady Bulldogs is streaking De La Salle University on Wednesday, 1 pm, at the UST Quadricentennial Pavilion.

Adamson looks to return to the win column later that day against Ateneo at 3 pm.

Earlier, La Salle hacked out a 65-58 victory over Far Eastern University behind the big games of Fina Niantcho and Charmine Torres.

Down by 10 after back-to-back conversions by the Lady Archers, the Lady Tamaraws unloaded 8 unanswered points to inch within two with 4:50 to go in the final frame, 54-56.

“I thought we had a grind-out game. We needed this kind of win because the last game we won by a blowout. This is a character win for us,” said Lady Archers head coach Cholo Villanueva.

Sario, who hit the dagger triple with 1:08 left, had 9 points as well.

“There’s really no superstar for us. The superstar here is the system,” added Villanueva, who saw different players stepping up in their four victories.

The Lady Archers stretched their winning streak to three to improve to 4-1, good for second, while the Lady Tamaraws absorbed their third consecutive loss to drop to 1-4 at seventh.

Danica Pacia had 16 points and 9 rebounds in the losing effort while senior Camille Taguiam was limited to just 3-of-15 shooting to end with 13 points, 8 rebounds, and 4 assists against 8 turnovers. 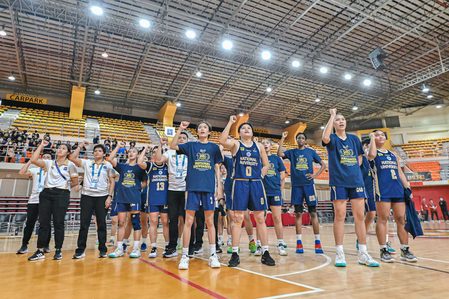