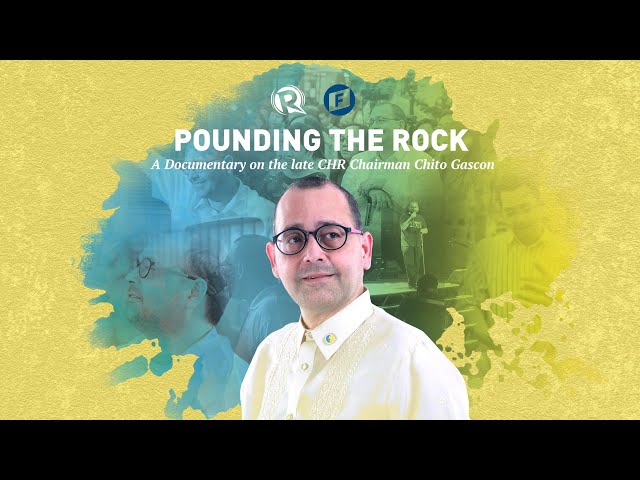 And it was a colossal “rock.” Under President Rodrigo Duterte’s administration, human rights suffered unprecedented setbacks that could only be compared to another dark era in Philippine history, Martial Law under the despotic President Ferdinand Marcos.

By his own estimate in 2018, Gascon said around 27,000 were killed in extrajudicial killings during Duterte’s bloody war on drugs.

In 2017, congressmen loyal to Duterte reduced the commission’s annual budget to P1,000 or approximately $20. That move to debilitate the commission was thwarted by the Senate.

Gascon kept chipping away at this gigantic rock that demonized human rights. President Duterte famously said in a 2018 State of the Nation address, “Your concern is human rights. Mine is human lives.”

That statement, uttered by the highest official of the land, further alienated the Filipino people from the concept of human rights, that is at its core about the quality of life of humans.

In 2020, he again told policemen, “I don’t care about human rights,” then told them to shoot addicts, because “all addicts have guns… even if you don’t see a gun, just go ahead and shoot him.”

A student activist who played a huge role in the EDSA uprising 36 years ago, Gascon saw the rise in the dead body count as a repudiation of our country’s democratic past. The Philippines ignited the flame of People Power across the world in 1986 as one of the first countries to depose its tyrant through a bloodless revolution.

Pounding the rock, he was unfazed despite the lies and vicious personal attacks Duterte inflicted on him.

“Every single strike, every moment whether in times of victory or frustration, what we do every day will make a difference,” Gascon said.

In this documentary, Rappler, in partnership with Friedrich Naumann Foundation For Freedom – Philippines, tells the story of Gascon’s legacy in the fight for democracy and human rights. – Rappler.com