[OPINION] Doubling down on deterrence in the West Philippine Sea Facebook Twitter Copy URL
Copied
'War is off the table, simply put, because [China] does not want it, and it can ill afford it, regardless of how much Beijing beats its chest'

The past four years have seen Chinese efforts to consolidate its hegemony over the Asia Pacific intensifying on an unprecedented scale. Inaction on the part of the Trump and Duterte administrations has left a gaping hole in Southeast Asian foreign policy – one that China has seen fit to exploit. Global pandemic, domestic turmoil, and a transition into the Biden administration have kept US officials busy. In the Philippines, Duterte, in particular, has long expressed fears of an unwinnable war with China, arguing against a more aggressive policy in the West Philippine Sea. Faced with little resistance, the regional power has managed a stranglehold on vast swathes of the disputed territories, beefing up its military presence and establishing forward bases on artificial  islands.

Over the course of his tenure, Duterte has shifted the country’s foreign policy focus from the United States to China. Unwilling to jeopardize relations with his newfound ally (and the not so-insignificant benefits that “friendship” entails), Duterte has repeatedly downplayed Chinese  incursions into Philippine territory and the extent of its hard and soft power influence over the country. And although he has formally reiterated the nation’s unequivocal affirmation of the 2016 Hague Ruling after years of ambiguity, concrete policies and actions to enforce the country’s tribunal victory have rarely gone beyond the sternly worded reprimand.

Continued Chinese aggression spurred both the Philippines and the United States into military action. Naval forces spearheaded by the AFP’s most  advanced warships, BRP Jose Rizal and BRP Antonio Luna, joined the USN’s Theodore Roosevelt Carrier Strike Group and Makin Island Amphibious Ready Group in an impressive display of force in the region. China has since dispersed the majority of the 200-vessel flotilla moored at the Julian Felipe  (Whitsun) Reef.

[Just Saying] The West Philippine Sea must be saved If there is any lesson to be taken from this most recent incident, it is that deterrence works. Looking back, similar military responses from countries such as India, Japan, Taiwan, and Vietnam against Chinese aggression have thus far failed to provide any reasonable cassus belli for China to declare war, even if border disputes have led to loss of life. Contrary to Duterte’s  unfounded assumptions, deploying military forces to hotspots in the West Philippine Sea did not lead to a devastating nuclear war, or even to a prolonged stand-off. Quite the contrary, it expedited their exit.

Duterte’s refusal to commit to action in our disputed territories seems now to be less the product of informed, calculated decision-making than it is the blunder of a man revealed to be completely out of his depth and yet remains adamant on refusing the advice of his own officials. Cut it simple, Beijing took a gamble and it lost. It had operated on the very same assumptions of docility as it always had, only this time, the difference proved to be our response.

See, Chinese diplomacy under Xi Jinping takes on a very realist approach, exerting power wherever and whenever it can at the expense of other nations. Its aggressive foreign policy acts as a deflection of its domestic troubles, projecting power abroad to placate its citizens at home through a kind of popular nationalism. War is off the table, simply put, because it does not want it, and it can ill afford it, regardless of how much Beijing beats its chest.

What Xi’s China is, is a  schoolyard bully. It has a preference for taking on smaller, weaker neighbors as opposed to states on equal footing. And like a bully, whenever these weaker states fight back, its confidence in its ability is shaken. Add to that the United States’ renewed commitment to maintaining American influence in the Asia-Pacific, and China is left with little choice but to back down, at least for now.

Our recent success in fending off, arguably, the most significant single act of Chinese aggression to date leads to that same conclusion that security experts and academics have long been advocating: shift our foreign policy focus in the West Philippine Sea from passive diplomacy (bordering on acquiescence) to active deterrence. 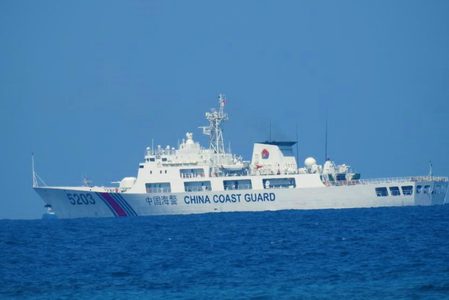 The Philippines’ geographical characteristics as an archipelago contrasted with its poor aerial and maritime capabilities pose significant challenges to national security. Out of the AFP’s main service branches, the Philippine Army takes up the lion’s share of military spending. The Philippine Navy and Air Force have long been neglected in the procurement of materiel and are widely considered to be some of the smallest and most outdated military forces in the whole of Southeast Asia.

Defense Secretary Lorenzana and other experts have, on numerous occasions, highlighted the need to invest resources into building a stronger navy – something which I have personally argued for and believe to be the most effective means of deterrence against Chinese incursions (not to mention securing our waters from internal threats presented by piracy and the unrestricted movement of terrorists). The commissioning of purpose-built warships like the recently deployed, Korean-made Jose Rizal-class frigates is a step in the right direction in asserting our economic and territorial rights in the West Philippine Sea. Clearly, the results speak for themselves.

As it stands, our military priorities must veer away from internal, counter-insurgency operations of dubious results, and of which other agencies such as the PNP are already involved, against its own citizens, and focus instead on the greater, external issues that threaten national security. More than rooting out perceived threats posed by (alleged) communists and rebels, now is the time for the AFP (and its handlers in government) to step up and protect our borders and our sovereignty from the very real threat of Chinese aggression. – Rappler.com