Facebook Twitter Copy URL
Copied
'My father was a fascist, and at home, tyranny reigned.... My mother took all the blows while the tyrant enjoyed the company of other women.'

My mother approached the mirror and fixed herself one last time. Last night’s fiasco had her praying she was somewhere else but the bed. Her swollen face could not hide the fact that she had grown weary, as were the bruises on her arms, no matter her effort to conceal them with makeup. She took her bag as if nothing had happened, bid farewell, and left for work. I was six ― and that morning, I knew something was wrong.

November is the start of the 18-day Campaign to End Violence Against Women (VAW). Violence against women has been a perennial issue in the country. It includes physical harm, sexual violence, psychological torture, and economic abuse. According to the World Health Organization, 1 in 3 women have suffered gender violence in their lifetime. My mother is part of this. 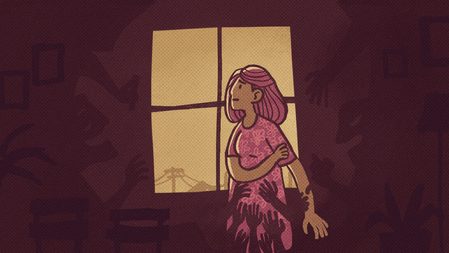 Growing up, I hadn’t realized we had been living with a tyrant, up until I witnessed my mother kneeling before him, begging for pity. No holds barred: my father was a fascist, and at home, tyranny reigned. His friends and colleagues often dubbed him “Kastila,” in reference both to his Spanish lineage, and his tendency to act cruel like a conquistador.

Most nights, he would go home drunk and beat my mother, and in response, she would cry in pain. Our house was made of bamboo, so every thud felt like an earthquake. My body synchronized with the trembling of the floor and of the nipa wall, which separated heaven from hell by at least an inch. On my end, I experienced multiple counts of physical and emotional abuse. For whatever reason, my father would summon me late at night to ask questions, devil’s advocate that he was. I would shake in terror. Whenever I failed to answer him, he would kick me or berate me endlessly. My mother would run to me offering comfort.

When they slept together, my father would leave a bolo by his side to threaten my mother not to fight back. She would then wake up every morning restless. I recall how, one time, he threw my mother out of the house in the middle of the night after he got frustrated with her. She ended up sleeping at my grandmother’s house, distressed. Then the violence intensified. Police cars started to frequent our compound. For two consecutive years, our Christmas would turn bloody. But I would return to school the following month pretending things at home were fine.

My mother took all the blows while the tyrant enjoyed the company of other women. When she worked as a domestic helper in Hong Kong, my father, who was still in college, met another lady. They bore a daughter together, secretly, at the expense of his marriage. When my mother found out about it, she was furious. Who wouldn’t feel sick to the core, betrayed by the man you promised your life to? Worse, it did not only happen once. It went on for years, and my mother’s tribulations did not seem to end. When I was a bit older, I accompanied her to Miagao to confront the new mistress he was seeing. The world crumbled when my mother heard the news. The woman was pregnant. That was the day I learned what a mother’s pain cost.

When my father lost his managerial position, the family’s finances sank. Our living standard plunged. And life got bumpier. Unbeknownst to us, he owed his company a lot. And his company before that; and even the ones whom he had cut ties with already. He was drowning in debt. No, my mother was drowning in debt. He escaped accountability and left it to us. My mother ended up paying for some, while I received his court letters and attended one of his court hearings in the city. A few years later, he was driven out of the house. He was no longer allowed to come near us lest he be punished. As a result, all the financial responsibilities were left to my mother. She sustained my education until I completed junior high school, got my first UP diploma, and returned to UP Visayas as an undergraduate student.

The violence I witnessed inflicted against my mother, the person who carried me for nine months, and took jabs to defend us, propelled me to fight back. Her struggles remind me always of our duty to stand up to tyrants like Duterte.

[Dash of SAS] For Duterte, sexism is a political strategy

It is the likes of Duterte, and his sexist remarks, that further legitimize violence against women today. Our home, which had turned into a war zone, but now a sanctuary, is just one of the grounds where violence against women take place everyday. In the countryside, women are abused by the military. In the workplace, they are discriminated against. In the media, stereotypes are propagated. In the face of tyranny, their capacity to lead is put to question. But no matter what else is to be said about them, the fact of the matter remains: Women are fighters; and among these fighters, a mother is telling her son, “halong” (take care).

As we campaign to end violence against women, may we also honor all the women who have fallen, fought, and freed our fellows in the spirit of genuine liberation. They may come from a place as small as a house, or as massive as a mountain. They may be a spark, or a blazing flame; a cushion at night, or shade at day; or even a voice, often dismissed, chanting: “Babae ako, hindi babae lang (I am a woman, not just a woman).”

I look into the mirror and find my mother’s eyes in mine. Soft. Sure. She is staring back at me, her words echoing: The world is cruel, and evil walks among us. Wherever you go, fight. I fixed myself one last time and left. If my mother can oust a tyrant, the women can oust Duterte. – Rappler.com

Phillippe Angelo T. Hiñosa is a student of Sociology at the University of the Philippines Visayas. He is currently the lead convenor of Rise for Education-Panay and the Councilor for Students Rights and Welfare of the UP Visayas-University Student Council.

[OPINION] To address gender-based violence amid COVID-19, we need creativity, collaboration, and courage