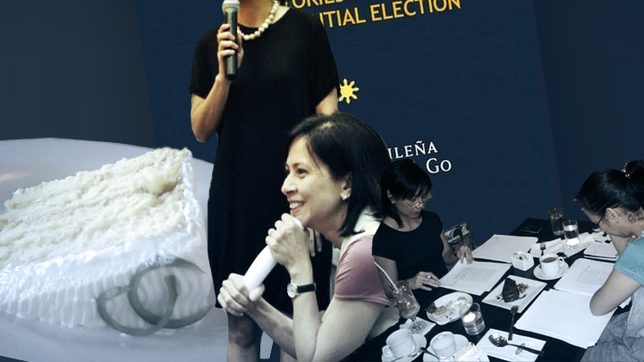 Facebook Twitter Copy URL
Copied
'When I finished my last chapter, I had the craving of an expectant mother, such that another friend called me insane before dutifully driving me two hours, through a rainy late afternoon, to Choco Kiss in UP Diliman'

This is a blog published by Newsbreak on July 15, 2011, shortly after the book Ambition, Destiny, Victory: Stories From A Presidential Election came out. Rappler is republishing it as a tribute to The Chocolate Kiss Café, which announced that it would be permanently closing its doors on June 22, 2021.

I didn’t realize it had gotten crazy, this craving I had for cakes the past four months or so, until a couple of friends called it so. From February until early June (2011), they noticed that, not a few times during very late nights or the wee hours, I proclaimed on Facebook how I was aching for the dayap chiffon cake from The Chocolate Kiss Café. Even now, my only mobile upload has been the photo of that dessert with the caption, “Heavenly re-defined.”

Perhaps there was only one thing crazier that I did, not too long before this. I agreed with Chay F. Hofileña’s idea to write a book on the last presidential elections without any sure funding, publisher, or even a guesstimate of how much more work it would require of us compared to another campaign book we previously collaborated on. In fact, the book – launched just last week as Ambition, Destiny, Victory: Stories From A Presidential Election – had everything to do with this jones for the dayap chiffon cake…and the quezo chiffon, the orange chiffon, the sour cream cheese, and all other cakes after that. It’s a long but delightful story.

My job directing Newsbreak’s coverage and my commitment as a contributor for ANC starting 2009 made me think of campaign and election reports only in terms of daily, weekly, and monthly targets. When 2010 rolled in, Chay’s mind was set on documenting this historical political exercise in a book. We had no quarrel about why. The 2010 presidential election was meant to be momentous for several reasons:

The candidates – even just the four major ones, who would each earn a chapter in the book – made for a colorful and interesting mix. We had a low-profile senator who was running on borrowed popularity – that of his recently departed mother. We had an impeached, convicted, incarcerated, and pardoned president whose impressive showing in the provinces the media tried to downplay. A self-made businessman was trying to introduce an innovation of using trusted corporate people in a very political and nuanced exercise, while having the misfortune of being singled out to explain his campaign spending despite some of his rivals’ questionable sources of funds. A highly qualified and principled candidate, who drew a following from youth voters who saw his performance in debates, was stubbornly casting his lot with a tainted principal and a party in crisis.

And the race just wouldn’t run out of surprises: how the people who were supposed to be watching – the campaign lieutenants and the media – failed to see a dark horse galloping from behind to break the vice-presidential finish line; and how it took “talent” on the part of the original frontrunner’s handlers to allow him to lose just like that.

Our problem was how to get the book out. There seemed, at the time, to be a dearth of grants for a book that intended to tell the campaign and election stories as they were, in a journalistic way and style. We weren’t willing to compromise our material to become what many institutions were so addicted to supporting – that is, anything that a broader readership would consider academic, esoteric, and far removed from the gut.

But Chay was born with determination for a twin. In time, we were constantly consulting with Dean Tony La Viña to refine the concept of the book (the Ateneo School of Government, which he heads, gave us some research fund). And my co-author managed to convince the man, whose surname she shares, to also share the book’s editorial cost. Finally, there came RayVi Sunico of Cacho Publishing House. While normally publishing children’s books, he willingly took on the election project because probably – just like my craving for the dayap cake (yes, we’re returning to that one) – crazy sometimes visited publishers like him, too.

His intro to the book never fails to convince me that, my biases aside, the book’s concept was indeed good: “This book leads us out…of the pointless convenience of demonization and the easy boxes of political expediency and shows how our leaders invested not only time or money or their effort but their very humanity in our people’s favorite form of both government and entertainment. Because it does that, it helps us realize that at least one way to win in the political game, is to step out of it and so, to learn.”

And this is where the Choco Kiss craving story begins. Ambition, Destiny Victory: Stories From A Presidential Election is a book one year in the making. Interviews started in April 2010, in the heat of the campaign. We conducted sit-down interviews with more than 60 campaign insiders, pollsters, analysts, and fellow journalists who were embedded in the campaigns. If we were to include the short interviews, informal talks, email and text exchanges with other election players, the count would easily run to more than a hundred. Throw in the articles, reports, papers, surveys, and books that we went over, and you’ll have an idea of how unwieldy the data had become by the time we were writing the chapters early this year. In between, Chay and I had countless discussions and self-critiques over coffee that, I swear, could have added up to gallons. We kept each other company until daybreak through chats and Skype. Each time we felt a point or two still missing past deadline, we found ourselves chasing after additional interviews and documents.

The result was an awkward attempt at initial drafts. The editor-publisher invited us authors to lunch after he sensed that the first two chapters were written for the sake of meeting our deadlines rather than telling the stories that had to be told. It was at Chocolate Kiss. As I gorged on my all-time favorite fish fillet with pesto salsa, RayVi served us as well a buffet of ideas on how we could improve certain rough points in the draft, identify what was obstructing the smooth flow of the narratives, adopt what would make a wider audience pick up the title from the bookstore shelves.

Maybe because he is himself a writer, he was always suggesting but never imposing in matters of content and style. He didn’t hold back on praising some brilliant or witty phrases we had used, or on pointing out at what point in a chapter we suddenly lost him. He provided perspective when we appeared to be getting too attached to the subjects we were writing about. For dessert, RayVi insisted we try the cakes other than the staple chocolate. By the time I was served my dayap chiffon (and they, their quezo chiffon), Chay and I had already gotten a handle on the tone and style we would adopt for the writing and re-writing of the chapters. We were going to narrate stories, capture drama, and portray the humanity of these people called political animals. We were not going to be just about numbers, lessons, and analyses.

Since then, whenever a deadline approached and I was under pressure, getting lost, or overwhelmed, my mind wandered back to that meeting, and the dayap chiffon cake that topped it, to put me back on track. A friend, another journalist, said my subconscious desire to finish the parts assigned to me manifested physically through that craving. When I finished my last chapter, I had the craving of an expectant mother, such that another friend called me insane before dutifully driving me two hours, through a rainy late afternoon, to Choco Kiss in UP Diliman.

Those who have read Ambition, Destiny Victory: Stories From A Presidential Election tell us that it reads like a novel, even while it packs a solid dose of information and insights. That’s their opinion. To me, it’s just like a generous serving of Chocolate Kiss’s light-textured dayap chiffon, with just enough sweetness, perfected by the almost gooey marshmallow icing. I know, it’s crazy! Just like our elections here – delectably crazy. – Rappler.com

Another Osmeña running for senator