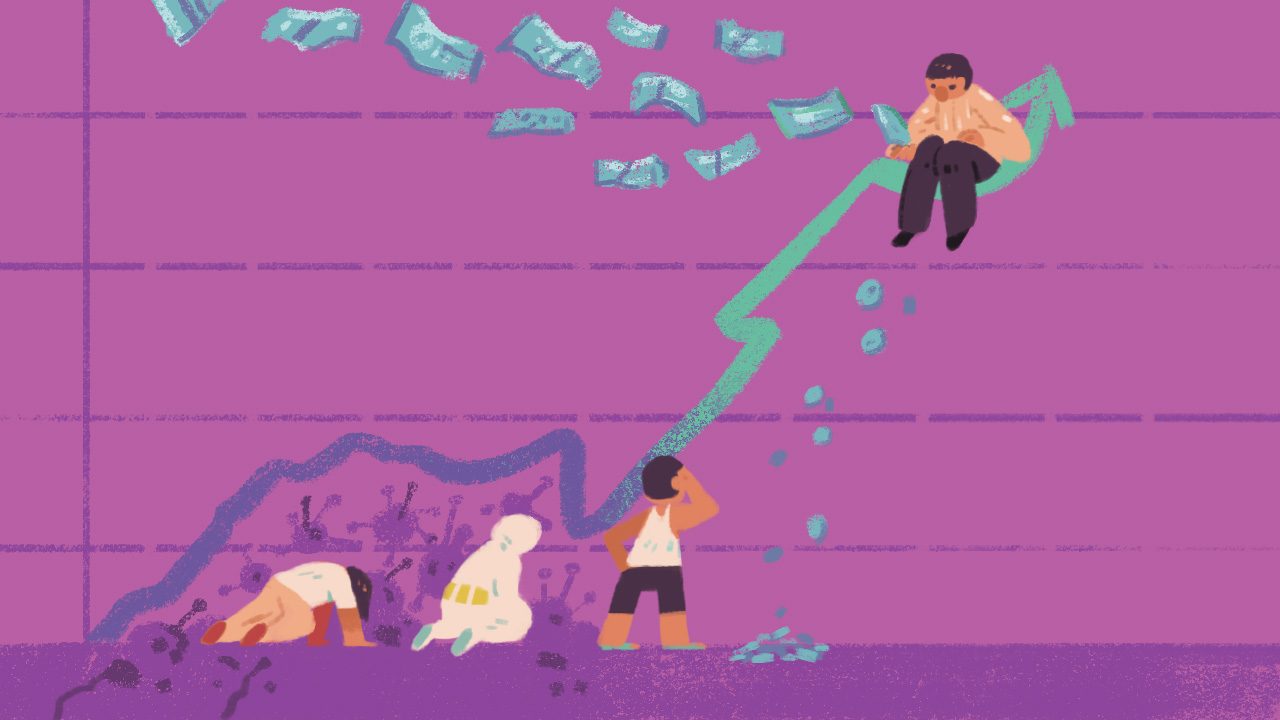 Facebook Twitter Copy URL
Copied
'Duterte’s ratings have only risen. Heck, even record-high hunger — as good a gut issue as you’ll ever get — failed to dent his ratings. How the hell could this happen?'

On the one hand, our economy has never been in a worse state. Amid the pandemic, our economy has tanked. The ranks of the unemployed have swelled. Poverty is expected to worsen. All these in spite of — in fact because of — our abysmal COVID-19 response, considered the worst in ASEAN.

On the other hand, President Rodrigo Duterte has never been more popular: a recent Pulse Asia survey shows his approval and trust ratings reached 91%. A sizable 84% also approved of his crisis management.

You’d think Duterte’s ratings would go down — or at least not improve — owing to his botched pandemic response and the Pandora’s box of economic problems it opened.

But, paradoxically, Duterte’s ratings have only risen. Heck, even record-high hunger — as good a gut issue as you’ll ever get — failed to dent his ratings.

How the hell could this happen?

The thing is, Duterte and his minions truly deserve blame. There’s a clear link between today’s many gut issues and the government’s ineptitude and negligence.

First, by failing to act promptly against the pandemic in January and February, the Duterte government wasted precious time during which they could have contained the virus. (READ: Had Duterte acted earlier, PH economy would be safe to open by now)

Other countries like Vietnam acted earlier and more efficiently, and today they’re more or less free to reopen their economies. We can’t do that just yet.

Our economic growth projections look grim. On Tuesday, October 13, the International Monetary Fund projected that the Philippines will contract by 8.3% by year-end. By contrast, the whole of ASEAN-5 will just contract by just 3.4%.

Vietnam is also projected to overtake the Philippines this year in terms of average incomes. Soon, the average Vietnamese will enjoy a higher income than the average Filipino. Rather symbolic that such a transition — long anticipated by economists — should happen smack in the middle of the pandemic.

A speedy reopening of the Philippine economy — in the form of, say, shorter curfew hours and expanded capacity for businesses and public transportation — now underlies Duterte and his cabinet’s economic response. In their minds, such a policy will allow Filipinos to quickly get back to their jobs and recover lost income.

Yet fully reopening the economy with a yet unflattened epidemic curve will continue to be dangerous. Lest they forget, the virus spreads exponentially, and just a few cases will be enough for the epidemic curve to soar again.

Economic aid — in the form of cash transfers, wage subsidies, and the like — should be a form of recompense, a way for government to make up for its bumbling handling of the health crisis.

But the Duterte government has largely reneged on its responsibility to give out much-needed aid, leaving many vulnerable sectors to fend for themselves. In fact, government is poised to slash the budget of key social protection and economic aid programs next year. (READ: Why you should be alarmed by Duterte’s 2021 budget)

The economic pain felt by Filipinos today can be rightly attributed to the failings of the Duterte government. Yet, somehow, Filipinos still rewarded him with sky-high ratings.

Our people know and feel that many things have gone awry. But for some reason — at least according to surveys — they fail to link such problems to government’s failures. They fall short of assigning blame on Duterte. Why?

First, are the polling data accurate?

A number of people have cast doubt on the data itself. Some allege that Pulse Asia’s respondents are too few and therefore not representative of Filipinos’ true sentiments.

Sure, statisticians say improvements in the methodology can be made. But the questions and sampling methodology have remained intact since well before the Duterte administration, and the findings are believable.

Is it because of the aid?

Recall that the Duterte government embarked on a massive and inadvertently populist emergency subsidy program in April and May, where they gave P5,000 to P8,000 each to 18 million households.

Small, delayed, and politicized as it was, aid is aid. And with patronage firmly embedded in our politics, it’s easy to attribute such aid to Duterte’s person and perceived beneficence — even if, in fact, Duterte has abandoned the idea of giving future rounds of aid.

Note that other populist leaders worldwide have similarly thrived during the pandemic.

Is it because of fear?

Political analysts have suggested that the mere collection of data from respondents — in a time of authoritarianism and state-sponsored violence — could induce people to lie when asked about their opinions and feelings toward government. Even the president of Pulse Asia cites this very real fear factor.

Survey enumerators, after all, are strangers. Who knows what they’ll do with the information they collect from respondents? Lying is near costless, but telling the truth could cost one’s safety. Hence, lying is a safe strategy for most to take, and Duterte’s popularity could be overestimated.

Is it because of disinformation?

Social media platforms (especially Facebook and YouTube) have become as precious as air for many Filipinos. Government has exploited this fact by pouring money into online propaganda, including the creation and beefing up of malicious networks that spew lies and hate on a daily basis.

Lately, government has aggressively pushed the message that they’re doing a good job with the pandemic. This has invariably cascaded not just through social media, but also through pliant, pro-Duterte outlets on TV, radio, and print.

A lie told a million times becomes the truth, so they say, and the barrage of propaganda could impress upon many Filipinos that, indeed, government is doing a good job — even if the truth couldn’t be farther from that.

Opposition figures have long wondered what could turn the tide of public opinion against Duterte.

Clearly, the war on drugs and the thousands of extrajudicial killings — remember those? — didn’t work.

Clearly, the erosion of checks and balances and the bastardization of democratic institutions didn’t work.

At some point, only gut issues — grinding poverty, hunger, and widespread economic suffering — seem to be left.

But testing this idea is difficult. Before the pandemic, our economy was, in fact, doing not too badly.

The closest thing to an economic crisis was the spell of high inflation in 2018. Back in 2017, Congress passed the TRAIN law which, among other things, hiked excise taxes on petroleum and other products, resulting in skyrocketing prices, runaway inflation, and depressed purchasing power.

For a moment it seemed it could pull down Duterte’s popularity. But Duterte rode out that crisis way too easily. Inflation subsided albeit slowly, and months later it essentially became a non-issue — as if it never happened.

Today, the Philippine economy has entered a full-blown economic crisis, and hopes for a quick recovery are dim. To see that Duterte’s popularity climbed amid the turmoil means he has effectively gutted the gut issue.

But Filipinos need to wake up. Regardless of public perception, the country now is truly, objectively in a very bad shape. With the proposed 2021 budget riddled with perverse priorities, Filipinos’ economic misery will likely persist.

If gut issues no longer matter, what will? – Rappler.com