When the ICC announced it would proceed to the next step in investigating alleged state-sponsored killings under the administration’s “drug war,” the administration’s supporters called the ICC process an intrusion into our “internal affairs,” adding that our local courts could do the job.

The sudden surge in nationalism (or belated discovery of the word “sovereignty”) became fodder for memes. Even more unfortunate, Justice Carpio noted in a column that the 2019 De Lima v. Duterte decision undermined this defense: “The problem is Philippine law and jurisprudence clearly contradict any invocation by Philippine authorities of the complementarity rule.… Philippine authorities are clearly ‘unable genuinely to carry out the investigation or prosecution’ of President Duterte for the alleged crimes he is being investigated by the ICC…or prosecute President Duterte for any crime of whatever nature while he remains in office.”

Other narratives of a similar bent showed up. One strand is that the president is immune from any suit, including suits from the ICC.

It is important to unpack the premises of these talking points – that it is the 1987 Constitution itself that grants the president absolute immunity. The reality is, not a single word in the Charter gives a president “immunity from suit.” The present form of presidential immunity is what we call in legal scholarship as “judge-made” law. In David v. Arroyo the Supreme Court gave immunity to President Arroyo, stating, “Settled is the doctrine that the president, during his tenure of office or actual incumbency, may not be sued in any civil or criminal case, and there is no need to provide for it in the Constitution or law.” Another iteration is the one Justice Carpio wrote about [De Lima v. Duterte (2019)], where the High Court, citing David v. Arroyo said: “The concept of presidential immunity is not explicitly spelled out in the 1987 Constitution. However, the Court has affirmed that there is no need to expressly provide for it either in the Constitution or in law.

Note that both cases acknowledged that the Constitution itself does not give the president any immunity, but reasoned that the weight of precedent (previous court decisions) calls for it to be carried forward. Which now begs the question: why do we give presidents immunity?

Presidential immunity rests on two premises: (1) that a president’s job is too important and he is too busy to be harassed by law suits; and (2) the fear that law suits “will degrade the dignity of the high office of the president.” It is akin to a “convenience fee.” To allow him to focus on the job, we make him immune from all lawsuits, even if the 1987 Constitution doesn’t give him that.

What the 1987 Constitution does give however, is a set of powers that has been described as “hyper-presidentialism.” “Hyper-presidentialism” refers to giving the president too much power at the cost of weakening the legislature and the judiciary.

Rappler Talk: A crossroads for Duterte and the ICC 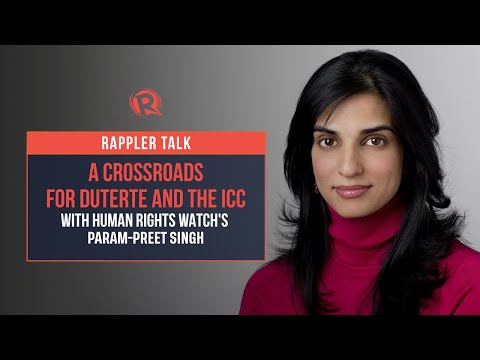 Susan Rose-Ackerman and Diane Desierto wrote in 2011 (“Hyper-Presidentialism: Separation of Powers without Checks and Balances in Argentina and the Philippines”) that it allowed presidents to get near impunity often with the unintentional cooperation of the branches supposed to check his abuse. Dr. Desierto is a Filipina who works with the Hague and the UN, and heads the International Human Rights Program of a top US Law school.

A key insight from the study: “[T]hese presidents have shielded themselves from scrutiny, undermined the effectiveness of other branches, and aggrandized their own power.” Analyzing the Arroyo term, they noted that: “Despite numerous constitutional limitations and a rigid structural design for dealing with emergencies, President Arroyo eluded these constraints by acting unilaterally, in a context where she could rely on key majorities in Congress and the Supreme Court to accept a fait accompli.”

With a Constitution already tilted heavily towards the president, is it still worth continuing the “convenience fee” arrangement of giving a president absolute immunity?

We can look at the recent experience of a democracy whose Constitution has ties to our own. In Trump v. Vance, the US Supreme Court dealt with then President Trump’s claims that he was immune from a subpoena issued by a lower court. It began in 2018 when the New York District Attorney opened an investigation into “business transactions involving multiple individuals whose conduct may have violated state law.” It then served a subpoena on Mazars USA, LLP, the personal accounting firm of Trump. Trump objected, arguing that a sitting president enjoys “absolute immunity from state criminal process.”

Trump v. Vance is wonderfully easy to read. In just 22 pages, Chief Justice Roberts dismantled Trump’s claim of being too busy and too important to be distracted by a law suit: “The president’s duties acquire no different character from those other high officials who are equally subject to impeachment…. Two centuries of experience likewise confirm that a properly tailored criminal subpoena will not normally hamper the performance of a president’s constitutional duties.”

What do Mindanaoans think about ICC prosecutor’s move vs Duterte?

CJ Roberts also referred to the case of disgraced VP Aaron Burr, where Chief Justice Marshall famously said that the president does not “stand exempt from the general provisions of the Constitution.” He continued by pointing out that holding a person out as above the law is a “single reservation” in “the case of the king,” whose “dignity” was seen as “incompatible” with being summoned. But, CJ Marshall continued, while a king can “do no wrong,” a president, by contrast, is “of the people” and subject to the law.” It is interesting how over the decades we have incorporated words like “dignity” and “immunity” into our national conversation about presidents when, as pointed out above, they were originally used to describe kings.

Constitutions are enacted: (1) on a promise (ie. that a president is not a King); and (2) under certain premises (that those who wield the powers of the presidency are reasonable and will respect the other two branches). Both that promise and its premises have been severely tested by presidents like Trump and Duterte. The drafters of the US Constitution or the 1987 Constitution designed documents meant to withstand the occasional headbutt, not the constitutional equivalent of a stampeding elephant.

What happens when chief executives don’t just blur constitutional lines but stomp them to oblivion? When the primary reason for immunity is to protect the “dignity” of the presidency from “degradation,” does this apply in a context where presidents openly espouse extreme violence (“Shoot them in the vagina”; “My only sin is EJK”), or court insurrection (i.e. the US Capitol Riot)?

It is worth recalling that ultimately these mechanisms are meant to balance power between three branches. The 1973 Constitution gave Marcos and his cronies immunity. This provision was deleted in the 1986 Constitutional Convention, with a commissioner calling it “one of the most immoral provisions” of the 1973 Constitution. A commissioner tried to re-insert it but was resisted by revered constitutionalist Fr. Bernas, on the reason that “we consider it understood in present jurisprudence.” We should appreciate the wisdom of Fr. Bernas in resisting the re-insertion of this “immoral provision” and the glib justification he gave for doing so.

Thirty-four years of experience under the 1987 Constitution shows that the design only works if the three branches are truly equal. Indeed, power can only be checked by the wielder’s vulnerability. This is a point worth considering now that the Supreme Court’s members are vulnerable to direct attack through quo warranto (Republic v. Sereno) filed by an officer controlled by a sitting president (Solicitor General). Add this to the recent experience of impeached chief justices and jailed senators, and one notices that the balance between the supposedly co-equal branches now tilts heavily in favor of a president who: (1) enjoys hyper-presidential powers; (2) is near-impervious to impeachment and (3) is absolutely immune from suit. The true cost of enlarging the presidency over the decades is the inexorable diminution of the other two branches.

Will recalibrating presidential immunity leave a president without protection?  In Trump v. Vance the answer was: “A president may avail himself of the same protections available to every other citizen.” What a great way to drill home the point: presidents are answerable to the same set of laws that govern us all. – Rappler.com