The hallway leading to the clinic was plastered with posters – some nearly half my size – of extreme close-up shots of genitalia ravaged by sexually transmitted infections like gonorrhea and chlamydia.

Think of extremely graphic images in medical books under a microscope transposed to a poster. It was like walking through a hallway of medical horrors.

If those posters were a person, they would be your mother wagging her finger at you, with a look in her eyes filled with enough fire and brimstone to cast fear in your loins so you would avoid sex for all eternity.

That was my first ever visit to a sexual health clinic in Manila.

I still inadvertently feel my thighs tighten when I think of those posters. They almost made me never want to have sex again. Almost.

That ghastly scene in that dreary walkway was what most messages about sexual health were like: scary.

For too, too long, public health interventions focused on disease prevention, fear, and panic to nudge people into practicing safe sex and avoiding disease or mistimed pregnancy. These messages ignored the actual reasons why people have sex: to experience pleasure, to feel desired, and to connect intimately with their partner.

Tapping into those feelings and motivations work better in convincing people to have safe sex than bombarding them with graphic images of sexually transmitted infections (STIs) or other similar interventions with a hyper focus on the risks of sex and dismissing its multitude of pleasures.

For the first time, an actual study proves that sex education and sexual health interventions that reflect the reasons people have sex – including for pleasure – work better in getting people to use condoms and practice safe sex.

The study, which was produced by the World Health Organization (WHO), The Case for Her, and The Pleasure Project found that incorporating pleasure in such sexual health programs can have positive effects on attitudes and safer sex behavior. The study also recommended revisting sexual education and health intervention approaches that do not acknowledge that sexual experiences can be pleasurable.

The cross country analysis revealed that making condom use fun or sexy resulted in behavioral changes in case studies in Spain and sexual health classes for young people and teens in Brazil.

Specifically, the review of 33 interventions that targeted STI/HIV risk reduction found that sexual health programs that put an emphasis on sexual pleasure “significantly improved” participants’ use of condoms.

From vacations, to cars, to ice cream, most everything in the world uses sex to sell, to change attitudes, and influence behavior – that is, except sexual health. Globally, there are a billion easily preventable STIs each year. About the same amount of dollars are spent on sexual and reproductive health and rights programs that are mostly medically antiseptic, fear-based, and just plain removed from pleasure as a fundamental reason why people have sex.

[WATCH] Spilling the Tea, Episode 2: Pleasure for women, by women 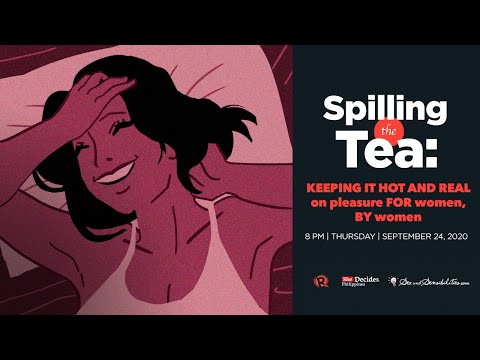 “Pleasure is arguably a powerful motivating factor for having sex and yet has been absent from sex education or sexual health interventions. Evidence now shows that it is more effective and prevents more unsafe sex to talk about pleasure. We know now that we can have safe sex if we know how to have good sex,” said Anne Philpott of The Pleasure Project and one of the co-authors of the study,

The study calls for public health experts, sexuality educators, and everyone else engaged in some form of sexuality education to actively and consistently include pleasure in their interventions, messages, and programs. Services that educate and equip people to engage in sex that is safe, consensual, and pleasurable not only make for better sex but also better sexual health outcomes.

I’m no longer haunted by those graphic posters jumping out at me at that sexual health clinic. Those images were exorcized by honest conversations about condom use and birth control. Those conversations hardly mentioned disease but focused more on what would feel good for both me and my partner, about what would make us feel safe – physically and emotionally.

These conversations elevated condom use from being a chore or an imposition to a mutual act of care. Feeling safe from STIs or unplanned pregnancies gave me the mind and body freedom to lose myself in the moment, to indulge in the intimate pleasures of mutual desire. It also allowed me and my partner to do another thing – show each other that we cared for and respected each other’s well-being.

More than technique, penis size, and exaggerations of a lover that could go on and on all night, that made for the best sex ever. – Rappler.com

Ana P. Santos writes about gender and sexuality and its intersections with migrant labor, intimacy and the politics of equality. She has a postgraduate degree in Gender (Sexuality) from the London School of Economics and Political Science as a Chevening scholar. Ana is also a Pleasure Fellow with The Pleasure Project, a UK-based organization that focuses on eroticizing safe sex. Follow her on Twitter @iamAnaSantos and Facebook.