As the national government’s disaster of a pandemic response plods on, we find relief in a few bright lights.

The past week we found it in the person of Colonel Mike Logico. It began with the tired troll narrative on the West Philippine Sea (WPS): “If matapang kayo, sige sumugod tayo dun.” This one was pushed by Robin Padilla, previously convicted for illegal possession of firearms (see Robin Padilla @ Robinhood Padilla v. Court of Appeals, G.R. No. 121917), and in the early ’90s gained fame as the “bad boy” of Philippine cinema.

Padilla challenged those who were critical of the President’s submissive attitude to China’s incursions: “Kung talagang matapang kayo, sumama kayo sa akin…tapatan natin yung militia nung mga Chinese.” The dare jives with the kind of defense Padilla used in his criminal case – that he was a “confidential agent” – when caught by police in Pampanga after trying to flee when he hit a person with his car. (The ensuing search of his vehicle yielded several firearms, hence the charge). Here was the “bad boy” again assuming a cloak of authority to lead people – that is, if they were as brave as him.

As it turned out, someone accepted by commenting, “Call.” Perhaps irked by this “Mike Logico,” Padilla replied, “Mike Logico, let’s go!” Colonel Logico’s response was withering: “1. Get a haircut; 2. Apply for MNSA [masters in national security administration]. I will be your instructor; 3. Apply for CGSC [Command and General Staff College]. I will be your instructor again; 4. If you make it past step 3, you will have the minimum competence to become an RCDG [regional community defense group] Commander. That will put you in a better position to challenge anyone.”

It seems that “Mike Logico” was actually Colonel Logico, who holds a masters in national security from the National Defense College of the Philippines, an MPM from Ateneo, and a degree from the Philippine Military Academy. He served as the battalion commander of the 66th Infantry Battalion based in New Bataan, Compostela Valley in Mindanao.

While Padilla may have the edge in posing and camera testing, Logico was the personification of “battle-tested.” Realizing he was dealing with the genuine article, Padilla quickly posted a profuse apology. Within hours, the exchange became viral. Within an hour of opening a Twitter account, Col. Logico already had more than 1,000 followers. (He now has around 8,000 in just one week.)

It seems there is much more to the “Barefoot Colonel” (his monicker). In 2014, after troops under his command accidentally shot two civilians in Compostela Valley, a newspaper reported that the tribal leaders, pursuant to their custom, demanded the lives of the erring soldiers as recompense. According to the report, Logico respectfully refused and offered his own life to the tribe instead. In a post by journalist Gail Ilagan, who witnessed the event, she described the scene thus: “LTC Michael Logico, this big, powerful man wearing a uniform of authority, quietly crossed the room and knelt before the kagawad. Whatever he said wasn’t picked up by the microphone, but Artoro willingly went into the soldier’s powerful arms and cried: “’Salamat, colonel, sa imong pagkilala sa among kasakit.’”

[OPINION] Where have all the decent PMA graduates gone? Interviewed after, Logico explained, “I felt that, as the commander, I was the only one capable of fixing the damage. Before I knew what I was doing, I stood up, walked over to Arturo (the tribal leader and a Dagansan relative), knelt in front of him, and begged for his forgiveness.” A leader of an overwhelmingly superior armed force kneeling and asking for forgiveness. How refreshing in a context where a police chief defends mañanitas, and a general red-tags anything that moves and calls senators “stupid.”

There is more. In a previous post, the colonel shared how a lecturer once asked what must be done to succeed in the WPS. His response: we must first purge defeatism.

Defeatism? I looked it up, and it means, “the acceptance of defeat without struggle, often with negative connotations.” Sounds familiar? Largely because we’ve been hearing it for the past 5 years. Inutil ako.” “Matatalo tayo.” So, whether he intended to or not, Colonel Logico’s simple response captures the President’s greatest sin – injecting the virus of defeatism into our national consciousness, including the military. 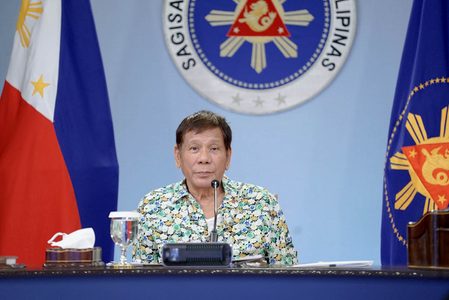 Defeatism is a sinister disease, and the President is the primary carrier. To enter any arena embracing the belief that one will lose makes it a certainty. And while leaders should consider the negatives, they should not publicly wallow in “helplessness.”

The country’s foremost maritime law expert, Dr. Jay Batongbacal, shared an article about how China employs three “warfares” through the “coordinated use of public opinion, psychological, and legal warfare methods to stifle criticism of the Chinese Communist Party and spread positive views of China.” The article says China also uses the three to influence foreign governments “in ways favorable to China.”

One reads “coordinated use of public opinion” and one thinks of troll farms. But psychological warfare? China must be celebrating that the president himself publicly preaches the Gospel of Defeatism each time he tells the nation, “Wala tayong magagawa.” He threatens Filipinos with “patayin,” but says he is “inutil” when faced with the Chinese incursion. No wonder Justice Carpio describes the president as China’s greatest resource. There is nothing more damaging to a nation’s psyche than a defeatist leader. Which reminds me of a call this week from a retired government official who shared his exasperation with the way the president frames our country as a nation of cowards. “The Filipino soldier was never a coward,” the official insists. He asked me to look into the Battle of Yultong. Yultong? It seems it was part of the Korean War, where 900 Filipino soldiers were tasked to defend against a force of 2,000-5,000 Chinese.

One account (Denise Emille Duque’s) narrates: “The battle ended with over 500 dead Chinese soldiers lying on the battlefield, and two of them were captured. On the other hand, the 10th BCT lost only 12 people, with 38 wounded and 6 missing. It was a victory for the ‘Fighting Filipinos.’” A monument was erected to commemorate the battle in Yeoncheon, South Korea. Perhaps our K-pop “army” should put this monument in their next itinerary, as a way to help the WPS effort.

900 Filipinos defeated 5,000 Chinese. From the way the president talks, it’s as if this was not part of our soldiers’ DNA. After 5 years of hearing him wallow, it was invigorating to learn about the Battle of Yultong. To discover that we have faced the Chinese before and won against overwhelming odds is a much-needed vaccine against the president’s mantra of helplessness. “Give me 10,000 Filipinos and I will conquer the world,” is a quote attributed to Gen. Douglas MacArthur. It is befuddling how a foreign commander can choose to inspire our troops while the present one infects them with fears of defeat.

Purging defeatism is a crucial first step. Because there is truth to the saying that a battle is won before the first shot is fired. And capitulation is not a strategy, it is a cop out. We must heed Col. Logico’s example; we need to set attitudes right. The Philippines is not helpless, and its soldiers are not cowards. Theirs is a proud history of which the Battle of Yultong is just one example.

As citizens, we can fight the virus of defeatism by reading up on historical examples, starting with the Battle of Mactan (whose history and hero, the President’s omnipresent shadow just mangled in front of Cebuanos). We must also appreciate that the military’s stance today is not wholly by choice. By constitutional design, they are limited by the chain of command and who wields it. We should not mistake the defeatism exhibited at the top as the general sentiment of our troops. These are trying times for them as well.

My father would always talk fondly of his commander, Admiral Ramos (not related to FVR). I gather he’d follow the admiral straight to hell. I think my father and his fellows would do the same for Colonel Logico. I believe there are several like him still.

John Molo is a commercial law litigator who enjoys reading and learning about the Constitution and its intersection with politics. He teaches Constitutional Law at UP Law-BGC, where he also chairs the Political Law Cluster of the faculty. He is the president of the Harvard Law School Association of the Philippines, and a past chairman of the IBP Law Journal. He led the team that sued the Aquino administration and invalidated the PDAF.