Sep 5, 2017 1:56 PM PHT
Agence France-Presse
Facebook Twitter Copy URL
Copied
The case comes as opponents of Cambodia's strongman premier, as well as NGOs and the critical press, have increasingly been smothered by court cases and threats ahead of a crunch general election next year 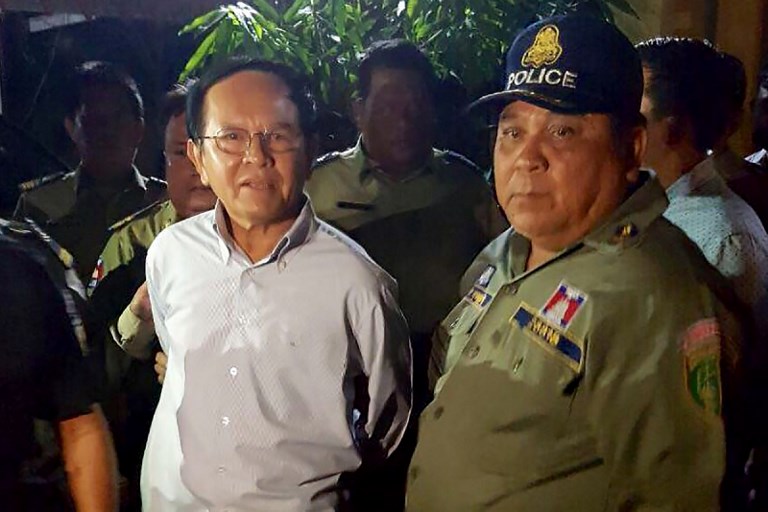 PHNOM PENH, Cambodia – A Cambodian court on Tuesday, September 5, charged opposition leader Kem Sokha with treason and espionage over an alleged conspiracy with unnamed foreigners, as strongman premier Hun Sen takes his assault against his political enemies into new ground.

The case comes as opponents of Cambodia’s strongman premier, as well as NGOs and the critical press, have increasingly been smothered by court cases and threats ahead of a crunch general election next year.

Kem Sokha, 64, who has formally lead the Cambodia National Rescue Party (CNRP) since March, is accused of conniving in a “secret plan” with foreign entities which began in 1993, according to a court statement.

It said evidence of a conspiracy was substantial enough to charge him under the penal code section for “treason and espionage”, which carries up to 30 years in jail.

Kem Sokha was arrested early Sunday, September 3, in a swoop by hundreds of security forces at his home in the Cambodian capital.

Hours later strongman premier Hun Sen accused the politician of being in cahoots with the United States.

“Behind his (Kem Sokha’s) hand it is still the same, it is America,” he said, in a typically bombastic speech.

To back up his claims, Hun Sen cited a broadcast of a 2013 speech by the opposition politician given in Australia in which he said he had recieved US help to build a pro-democracy movement inside Cambodia.

The CNRP were widely tipped to perform strongly in the 2018 polls, buoyed by the youth vote in a country where many are tired of rampant corruption, the dwindling human rights space and Hun Sen’s authoritarian style.

In February the CNRP’s then leader Sam Rainsy stepped down after a fresh welter of legal cases against him threatened the party with a ban from politics.

He already lives in self-exile to avoid convictions in Cambodia, which he says are politically motivated.

Kem Sokha took over at the helm of the party, but has been buffeted since by allegations and threats driven by Hun Sen and backed up by the kingdom’s notoriously pliant courts.

On Monday a re-tweet on Kem Sokha’s official Twitter feed read, “I may lose my freedom, but may freedom never die in Cambodia.”

Hun Sen is determined to extend his three decade rule and withstand the burgeoning popularity of the CNRP, muffling critics in the media and civil society.

Also on Monday The Cambodia Daily, one of the last independent newspapers in the kingdom, was shuttered by a tax claim it says is trumped up to muzzle its critical reporting.

Crackdowns on opposition politicians by the wily premier are routine ahead of elections, but the recent battery of charges is unprecedented.

“It seems like all the old rules are out the window,” said Sebastian Strangio, an expert on Cambodian politics, adding Hun Sen’s stranglehold on the kingdom is stronger than ever.

“Deprived of its leader, and harried by government repression, the CNRP will struggle to mount an effective campaign at next year’s election.”

Hun Sen, a firebrand former Khmer Rouge fighter turned premier, sells himself as the only man who can bind Cambodia together after dragging it from the ashes of civil war.

That argument has traction among many Cambodians, particularly the older generation who remember the Khmer Rouge regime of the 1970’s which left nearly a quarter of the country’s population dead. – Rappler.com