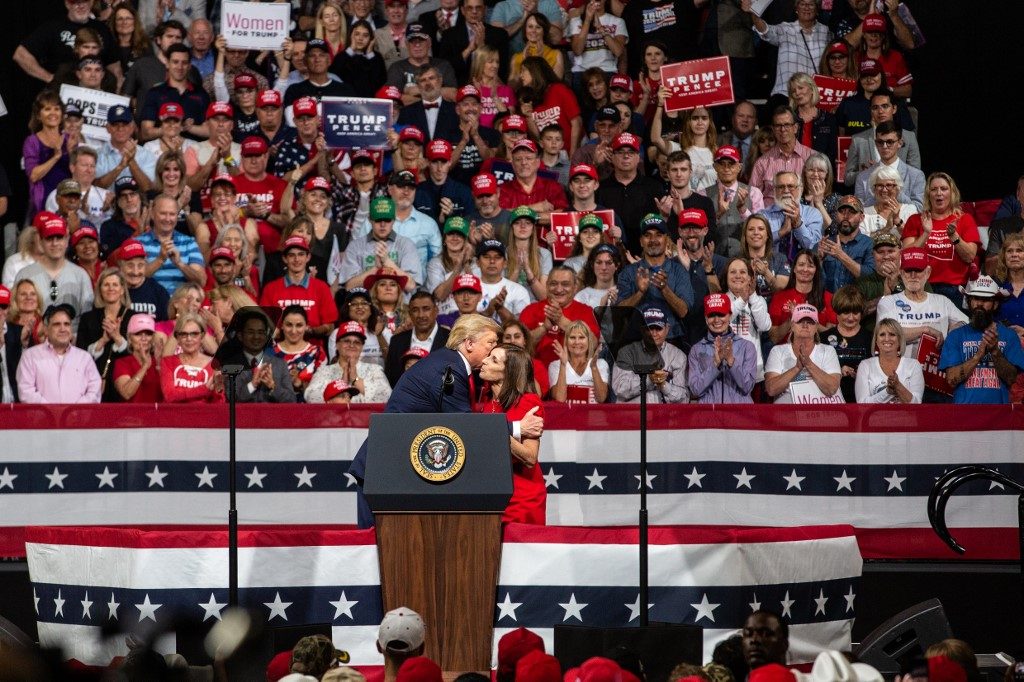 Facebook Twitter Copy URL
Copied
In the border state, US President Donald Trump stands by his campaign promise of building the wall

ARIZONA, United States – US President Donald Trump on Wednesday, February 19, kicked off his campaign in the West at a rally in Phoenix, Arizona, a known conservative state but now widely seen as a battleground for the 2020 polls.

Thousands of supporters welcomed Trump at the Arizona Veterans Memorial Colisuem. Some of them had to stay outside the venue and watch the president onscreen. (READ: ‘Same values’: Meet Trump’s unlikely supporters)

As usual, Trump touted the US’ “best economy ever,” as he claimed China and Europe are “doing poorly.” (READ: Trump’s favorite parts of U.S. economy are also the weakest)

He also highlighted the nation’s military strength, low unemployment, and fight against terrorism under his term.

In Arizona, a border state with a high concentration of Latinos, Trump repeatedly plugged his controversial immigration policies.

“We are starting the wall right in Arizona,” he said.

“The open-door policy allowed deadly drugs to flow freely, poisoning our children, including right here in Arizona. Washington Democrats put the needs of illegal immigrants before the well-being of American citizens. They want to let anyone from anywhere around the world to simply walk across the border and they want to give them a lifetime of free welfare, health care, everything,” Trump said.

But in the same speech, Trump said Latinos are better off under him.

“Hispanic Americans right now, more than 500,000 own a home…It lifted 10 million people off welfare. They have jobs and they love it and they love getting up and going to work,” he claimed.

Trump’s visit was meant not only to galvanize his base but to also endorse US Senator Martha McSally, his staunch supporter during the impeachment process. McSally is running against Democrat Mark Kelly. Recent polls show McSally is lagging behind her rival.

Trump blasted his democratic rivals, even resorting to name-calling. He also took aim at Democrats in Congress and the media over the impeachment process.

While experts and Democrats view Arizona as a swing state, Governor Doug Ducey vowed to keep it red.

“Mr President, we are gonna keep Arizona red in 2020. We are gonna return President Donald J Trump and the Vice President to the White House and Martha McSally to the US Senate. We are going to keep the Republican majority in our congressional delegations and state chambers,” Ducey said.

Trump said he will be visiting Arizona again in the run up to the elections.

In 2016, Trump won against Hillary Clinton in the state, despite the withdrawal of support by another Republican, the late Arizonan senator John McCain.

In the 2018 midterms, 5 of the 9 congressional districts in the state voted for Democrats. Its Senate seats were most recently won by a Democrat and a Republican. – Rappler.com