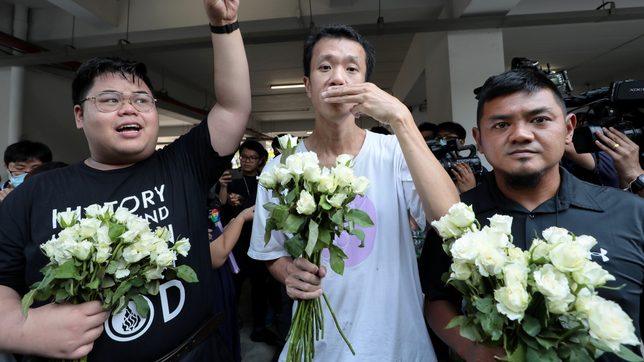 From left, Bunkueanun "Francis" Paothong, 21, Ekachai Hongkangwan, 45, and Suranat Panprasert, 35, flash 3 fingers salutes as they turn up at the attorney general's office after being on charges of attempted violence against the queen during a pro-democracy demonstration last year, when a royal motorcade encountered dozens of protesters, in Bangkok, Thailand March 31, 2021.

Facebook Twitter Copy URL
Copied
The case centers on an encounter at the height of anti-government demonstrations last year when Queen Suthida's convoy passed through a group of protesters on October 14.

Five Thai activists were indicted on Wednesday, March 31, on charges of attempted violence against the queen during a pro-democracy demonstration last year, when a royal motorcade encountered dozens of protesters.

Their lawyer Poonsuk Poonsukcharoen said prosecutors indicted the 5 under a section of the law that carries a minimum sentence of 16 years in prison for violence or attempted violence against the queen, heir-apparent or regent.

“I did not have such intentions, nor was I trying to do so. I’ve reaffirmed these facts over the past few months,” said one of the accused, Bunkueanun “Francis” Paothong, 21.

More serious breaches of the same law can result in life imprisonment, or a death sentence if an act is likely to endanger their life.

Others include Suranat Panprasert, 35, a coordinator for a youth group, Ekachai Hongkangwan, 45, and two others. All have denied the charges and are seeking bail.

The case centers on an encounter at the height of anti-government demonstrations last year when Queen Suthida’s convoy passed through a group of protesters on October 14.

Video from the incident showed police pushing protesters away from the queen’s car.

“We are just hoping for bail because we did not do anything wrong. We had no idea the royal convoy was coming,” Ekachai said.

The Royal Palace has not commented directly on the protests since they began last year.

There are currently 19 Thai youth activists in jail having been denied bail. They face a litany of charges, including sedition, while 12 of them are also charged with lese majeste, or insulting the monarchy, a crime punishable by up to 15 years in prison.

Poonsuk on Wednesday told reporters her clients were not protest leaders and would not repeat offenses.

“We hope the court will see that the 5 defendants are not a flight risk,” she said. – Rappler.com