Pope Francis answers reporters questions during a conference aboard the papal plane on his flight back to Rome after visiting Nur-Sultan, Kazakhstan, 15 September 2022.

Facebook Twitter Copy URL
Copied
A source says the Vatican made 'an expression of availability.' The Chinese side said they 'appreciated the gesture' but that there was no free time on Xi Jinping's schedule.

ABOARD THE PAPAL PLANE – The Vatican told China that Pope Francis was willing to meet Chinese President Xi Jinping while both leaders where in the Kazakh capital but China said there was not enough time, a Vatican source said on Thursday, September 15.

The source gave no details on how or when the Vatican approached China, with which it is involved in a delicate dialogue over the status of the Roman Catholic Church in the country.

The source said the Vatican made “an expression of availability”. The Chinese side said they “appreciated the gesture” but that there was no free time on Xi’s schedule. 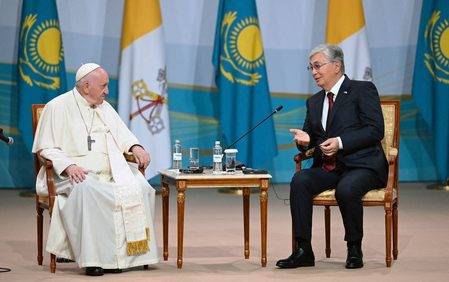 Both the pope and Xi were in Nur-Sultan on Wednesday. Xi was there for an official visit and Pope Francis was there to attend a congress of world religious leaders..

A meeting between the two men, however brief, would have been historic.

Speaking to reporters accompanying him on his flight to the Central Asian republic on Tuesday, Francis was asked whether he might meet Xi in its capital.

Francis replied coyly: “I don’t have any news about that,” without elaborating.

The pope has tried to ease the historically poor relations between the Holy See and China, and told Reuters in an interview in July that he hoped to renew a secret and contested agreement on the appointment of Roman Catholic bishops in China. – Rappler.com